GamerHash and Chainlink to Bring NFT Adoption to Gaming Community

We are excited to announce that GamerHash has integrated Chainlink’s BTC/USD Price Reference Data feed into our systems to calculate the profitability of providing different computational resources on our platform. This is the first integration in a much larger collaboration that will revolve around seeding NFT adoption in the mainstream gaming community.

Gamers are intimately familiar with interacting and trading valuable digital assets, making them a prime target to spark another wave of blockchain adoption through the integration of in-game NFT rewards. With over 480k users across 125 countries, we can introduce the concept of in-game NFTs to our large gaming community. For example, using Chainlink’s Verifiable Random Function (VRF) to distribute in-game random rewards or utilizing match outcomes to mint rare NFTs, which can trade on the GamerHash Marketplace.

Daniel Kochis, Head of Chainlink Business Development talked about his excitement, stating “The gaming industry is primed to see massive expansion through the introduction of in-game rewards as scarce NFT assets. We’re excited to collaborate with GamerHash to augment blockchain gaming through the use of Chainlink VRF and various other key off-chain price and data feeds.” 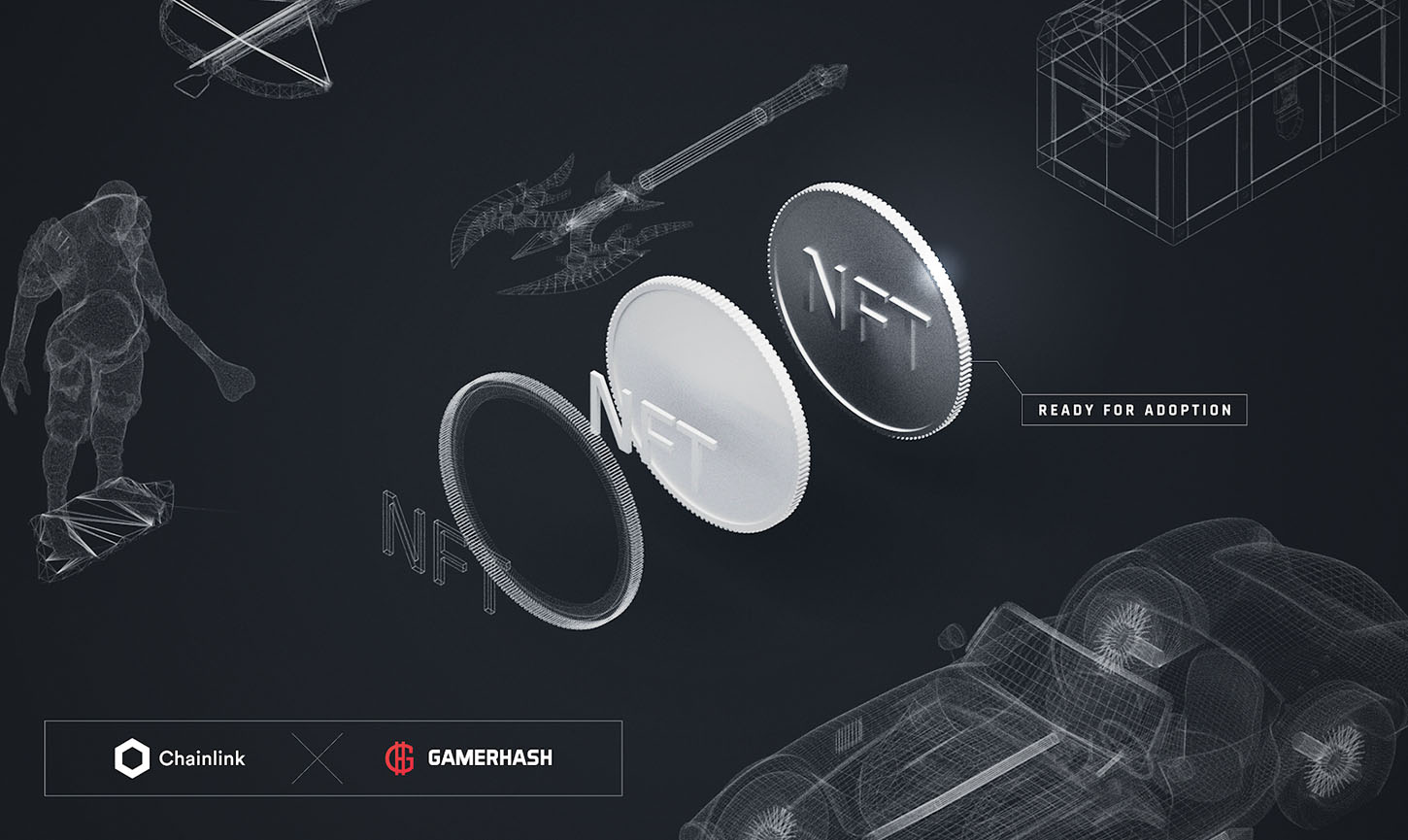 The first generation of NFTs were dominated by ERC-721 tokens like CryptoKitties, where users could breed and trade rare digital cats. While that seeded initial value and excitement in NFTs, more developers are discovering the huge potential of distributing NFTs as economic rewards within games. Whether it be a rare sword randomly spawned into existence on the battlefield or the distribution of rare skins upon completing an objective, these assets can become programmatically distributed and monetized. Moreover, NFTs may have applications across multiple different games (referred to as metaverses) and can trade in secondary markets.

None of this should come as a surprise, as in-game NFT assets are already driving customer value. For example, we’ve seen record prices for CS:GO skins or a Hyperion card that sold in Gods Unchained for $60,000 USD! Small gaming studios around the globe are recognizing this potential and already testing out new token possibilities and DevKits (SDKs) provided by blockchain projects. Additionally, the Blockchain Game Alliance has formed and includes both startups and small gaming studios, along with several well-known gaming brands.

GamerHash together with Chainlink sees great potential in the upcoming wave for collectible items in the form of in-game tokens. Our initial integration will start with price oracles, which gaming communities may increasingly need for both trading and speculating on assets, the later which is fairly new to gaming. Beyond price feeds, GamerHash will use Chainlink as the recommended oracle provider for future projects, which will incorporate their NFTs into the GamerHash marketplace.

Chainlink has proven to secure over a billion dollars in value in DeFi as the most widely used oracle. They are also increasingly being adopted in the blockchain gaming industry thanks to their ability to get any dataset, as well as their pioneering work on Chainlink VRF -- a secure on-chain RNG solution that is fully auditable by end users, allowing them to verify that the source of randomness is authentic.

“In a year or two market of non-fungible tokens will be consolidated as most of the other sectors,” said Artur Pszczolkowski, GamerHash Co-founder & CMO. “After building out our operations in Asia, we should have all the infrastructure in place to scale and become Amazon of NFTs, and Chainlink will be the go-to oracle solution for the users, games, and item exchange.”

GamerHash is the platform for gamers to share their idle CPU/GPU for mining crypto or earning it through playing games. In just 2.5 years, nearly 500.000 users have registered accounts on the platform. Upon finishing our seed round in the next few weeks, GamerHash will begin its operations in Asia where we have perfect market fit.

Company GamerCoin(GHX) token will be emitted in Malta and sales will start through well known south korean exchanges. Currently GamerHash sells its tokens directly, only to a limited number of buyers

Chainlink is a decentralized blockchain abstraction layer that enables the creation of universally connected smart contracts. Chainlink gives smart contracts across all blockchains access to secure and reliable data inputs and outputs. It works with large enterprises including Google, Oracle, and SWIFT and leading blockchain projects such as Ethereum, Polkadot, Synthetix, and Aave. One of Chainlink’s popular solutions is Chainlink VRF, a random number generation feature that enables blockchain smart contracts to access provably-fair and verifiable randomness. For more information, visit the Chainlink website.