Horizen, the zero-knowledge-enabled blockchain platform that provides tools for developers to custom build private or public blockchains announced the mainnet release of their cross-chain protocol, Zendoo.

Zendoo is a unique interoperability protocol and scaling solution that fosters an ecosystem of independent blockchains and decentralized applications (DApps) for real-world use cases. With Zendoo, developers can build custom zk-SNARK enabled blockchains that deliver massive throughput without compromising decentralization.

While blockchains have onboarded millions of users, their growth has come at the cost of security and decentralization. With every batch of new wallet addresses comes an increasingly greater risk of nodes going offline, smart contracts becoming exploited, or gas fees skyrocketing to unsuitable levels for everyday users.

These challenges represent the growing pains of mass adoption, which can be remedied by a network of blockchains that emphasizes decentralization and privacy freedom as a core feature while enabling scalability through independent yet interconnected blockchains.

“Zendoo pushes the boundaries of what is possible for decentralized networks by introducing new levels of flexibility and scalability not yet seen in our industry. This enables more transparent and secure networks for storing and exchanging valuable data or assets while reducing the costs and settlement times between transactions,” said Rob Viglione, co-founder and team lead of Horizen. “I strongly believe our patience and long term focus on creating the most decentralized and privacy-preserving system will pay off massively as the traditional economy begins to catch up to the benefits of blockchain technology in the coming months and years.”

Zendoo is the culmination of years of hard work to redefine what it means to achieve blockchain scalability and decentralization. With Zendoo, developers can choose consensus, privacy and speed, and customize crypto-economies of their blockchain.

“Zendoo unleashes the potential of blockchains to scale via the creation of multiple parallel networks that operate independently and can be customized for speed, privacy preservation and consensus. Our highly flexible system increases the design freedom and usability of blockchains while introducing cutting-edge technologies such as zero-knowledge proofs to preserve data privacy and SNARKs to allow communication with any kind of sidechain in a scalable way,” stated Alberto Garoffolo, Horizen’s engineering director. “These features are essential for building a boundless crypto-economy that is inclusive to all. With Zendoo, Horizen now enables the creation of blockchain applications without binding to a specific architecture, but at the same time, it allows decentralization, scalability and security.”

Zendoo enables developers to custom-build private or public blockchains that solve today’s real-world challenges with the flexibility to capture tomorrow’s opportunities. Zendoo-based blockchains can leverage the following ecosystem benefits in their design: 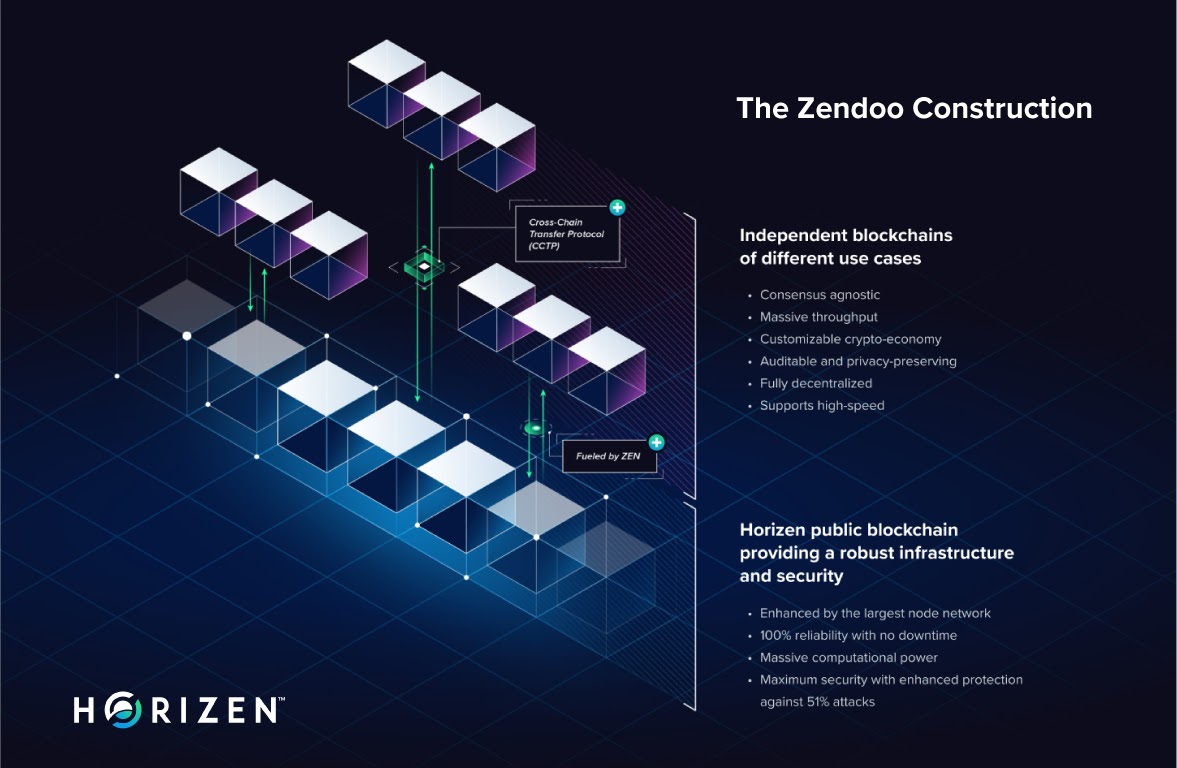 The backbone of the zero-knowledge network of blockchains is the highly secure and decentralized Horizen public mainchain fueled by Horizen’s native cryptocurrency, ZEN, and powered by the largest node infrastructure consisting of more than 47,000 nodes. The Horizen mainchain is also secured by an improved proof-of-work consensus mechanism with enhanced protection against 51% attacks.

About the Blaze SDK

Blaze is Horizen’s answer to how developers and traditional companies can leverage blockchain technology to improve their business. It’s an all-in-one SDK that enables developers to launch a high-speed blockchain on the Horizen network to achieve high transaction throughput. Horizen’s Blaze SDK will be released a few days after the Zendoo mainnet release.

In addition to the Blaze SDK, Horizen will release their Latus SDK, a permissionless SDK that enables fully decentralized blockchains and Ethereum Virtual Machine (EVM) integration for Ethereum smart contract compatibility. Both are expected to be available in 2022.

The Horizen community celebrates the launch

The Horizen community is celebrating the biggest milestone in the project’s history through a live virtual event with a giveaway of the native token ZEN. The party invited the Horizen team and industry leaders as guest speakers. The event will be livestreamed on Dec. 3.

Horizen is the zero-knowledge network of blockchains powered by the largest node system. Horizen offers best-in-class tools for developers to custom-build private or public blockchains with a level of flexibility unmatched by others. Developers have the freedom to fully customize their blockchains, including consensus type, speed, privacy, and crypto-economies. Blockchains built on Horizen produce massive throughput without compromising decentralization.