Adam Levy returns to the frontier of the Web3 creator economy with the fifth season of Mint, a leading audio and video series exploring how the creators of today are building the communities of tomorrow using Web3 primitives such as social tokens, NFTs and DAOs, to name a few. The first episode is available for RSVP now on the site.

This season of the Mint podcast brings over 20 exclusive conversations with the creators, collectors and founders defining the Web3 creator economy. The next two months will explore the future of music, social networks and the creative commons license, capturing key insights from the sector’s respective movers and shakers. 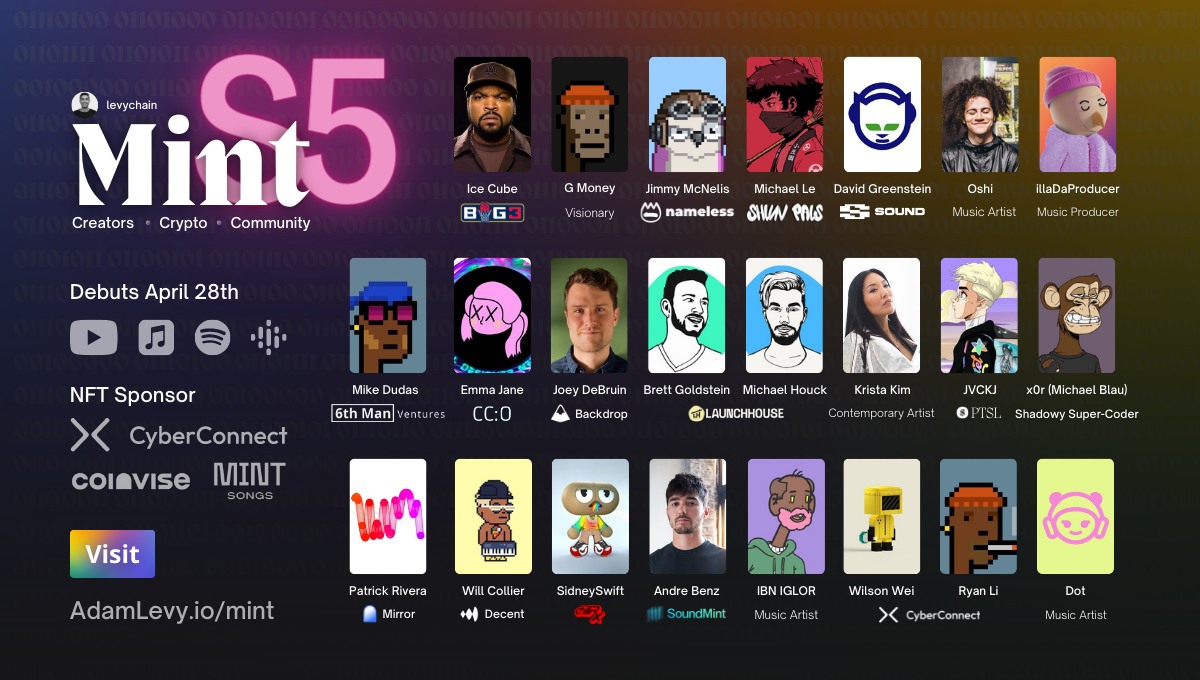 The season is available across all video and audio streaming platforms, answering the most frequent questions creators and communities have when building alongside Web3 primitives.

“Season 5 will feature interviews with some of the most creative and forward-thinking names in the Web3 creator economy,” said Mint founder and host Adam Levy. “Each episode features tips, tricks and invaluable insights straight from the catalysts defining this decentralized revolution.”

From modern fan clubs in which hundreds crowdfund an artist into financial liberation to multi-million-dollar communities surfacing overnight, this season welcomes the best stories emerging from Web3.

Season five’s sponsors include CyberConnect, Coinvise and Mint Songs, which are supporting Mint by collecting the show’s non-transferable NFTs that grant promotional benefits throughout the season.

Registration is open now for receiving all 20 episodes of Mint’s fifth season for free.

Reaching over 20,000 listeners per month and hosted by Adam Levy, Mint is a leading audio and video series exploring how the creators of today are building the communities of tomorrow using Web3 primitives like social tokens, NFTs and DAOs. Each month, a new season rolls out with numerous untold journeys from notable creators, Web3 founders and thought leaders who are tinkering with social money to make their creator economy a reality.