The uncertainties around the world and the legitimacies of business transactions are of significant concern.

The world is dynamic and rapidly changing, especially with solutions to mitigate the backdrops of existing platforms and systems. Blockchain technology is undoubtedly the world’s most recent technological development that has come with what could be termed the “new normal,” a new way of doing things across all sectors of every economy. The crypto world has taken the planet by storm over the last few years and is developing into one of the world’s major players within but not limited to finance, business, entertainment and investment.

Through our solutions, we want to change the world by democratizing the crypto space to ensure that everybody has equal access to the next generation of technology that is set to revolutionize the world. We plan to do this through our unique JPGoldCoin project. JPGoldCoin is a technology-based crypto asset backed with gold you can fall back on any time you have financial needs. Gold is a precious metal that has outlasted many currencies for many centuries; it has survived many economic busts and boom in many countries; and its value has remained fairly stable throughout history. JPGoldCoin is an ERC-20 token on the Ethereum blockchain.

The uniqueness of our project is such that it provides investment opportunities to experienced investors. Unlike Bitcoin, which is utility-based and supported by market hype and perceptions, the JPGoldCoin token will be backed by the gold mined from our various gold mining sites in Africa, where more than 45% of the world’s natural resources are located.

At the moment, our company has made million-dollar profits in gold exploration, while Canadian exploration experts have discovered potential gold mines at other locations.

The main features of the JPGoldCoin include: 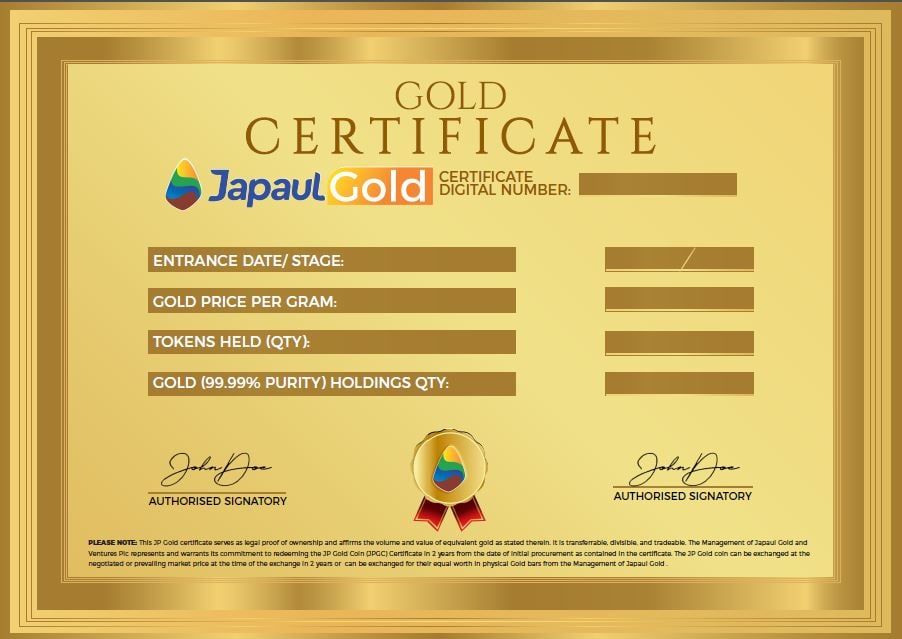 In addition, a gold certificate of participation will be presented to every investor after the distribution of tokens.

The sales stages of the token are separated into three distinguishable pre-sale stages followed by the main initial coin offering. The first stage of the pre-sale witnessed quite a large turnout of investors, who obviously set the pace for the following stages.

Our team is a hybrid of seasoned experts and professionals across finance, technology and mineral exploration in and out of Canada. We are partnered with reputable international organizations and have acquired exploration and mining licenses from the authorities.

JPGoldCoin is superior to other cryptocurrencies in the following ways: