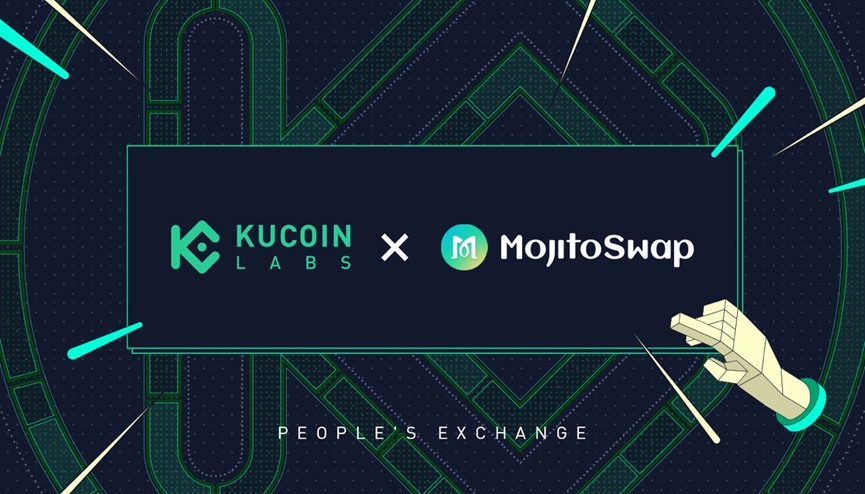 This investment round will gradually lead to more diversified resource exchanges between KuCoin Exchange, MojitoSwap and KCC, helping KuCoin strengthen its development in decentralized ecology.

MojitoSwap was officially launched in October 2021 and successively launched its Trade, Bar, Wine Pools, Nonfungible Token (NFT) and Launchpad functions, among others. It ranked first in total value locked and user rankings on KCC. With the support of the KCC community, MojitoSwap has become one of the most anticipated DEXs on the KCC chain with its rich layout of product functions.

Not long ago, MojitoSwap’s platform currency, MJT, was officially launched on KuCoin — the first time that KuCoin had supported a KCC ecological native project. MojitoSwap Launchpad also completed its initial DEX offering sale of the virtual mining project CoolMining in the first two weeks, assisting CoolMining in obtaining nearly $1 million in sales in a few hours.

Gloria, chief media officer of MojitoSwap said, “MojitoSwap, as the first DEX on the KCC chain, is honored to have the support of KCC community users and KuCoin Labs. MojitoSwap is one of the basic protocols on the KCC chain. At the opening of the KCC Unicorn Contest, I hope to use this investment to cooperate with more KCC ecological projects to jointly build the future of MojitoSwap and KCC. At the same time, we will also focus on promoting the further development of decentralized finance (DeFi), GameFi, Web3, and NFT-related tracks.”

MojitoSwap is a DEX running on KCC with an automated market maker mechanism. It provides all-in-one solutions for on-chain assets with Swap, Bar, Wine Pool, Launchpad and NFT functions, among others.

MojitoSwap aims to provide users with an efficient and low-cost token exchange. Users can have their token value-added while using MojitoSwap. The platform also provides a safe, easy-to-use, high-liquidity and basic DeFi protocol for KCC developers.

Launched in September 2017, KuCoin is a global cryptocurrency exchange for more than 600 digital assets. It currently provides spot, margin, peer-to-peer fiat and futures trading, and staking and lending to its 10 million users in 207 countries and regions worldwide. In 2018, KuCoin secured $20 million in Round A funding from IDG Capital and Matrix Partners. According to CoinMarketCap, KuCoin is currently ranked in the top five crypto exchanges. Forbes named KuCoin in its Best Crypto Exchanges for 2021. In 2022, The Ascent named KuCoin in its Best Crypto Exchanges and Apps.

KCC is a public chain project initiated and built by the developer community of KuCoin Token (KCS) and KuCoin, aiming to solve the network latency and high gas fees of the Ethereum network. It is Ethereum-based and Ethereum Virtual Machine (EVM) and smart contract-compatible, providing community users and developers with a higher-speed, more convenient and lower-cost blockchain experience.

Founded in May 2018, KuCoin Labs is the investment and research force of the KuCoin ecosystem. KuCoin Labs diversifies and intensifies investments in projects early to help builders achieve sustainable growth and success in the decentralized world. KuCoin Labs now possesses a portfolio of more than 50 projects, including Arweave, MultiVac, Certik, OneLedger, Lukso and Ankr in the infrastructure, DeFi and NFT sectors. In April 2021, KuCoin Labs established a $50-million fund to find the next crypto gem. In November 2021, KuCoin Labs introduced a $100-million fund to empower the metaverse ecosystem and other innovative projects developing infrastructure by investing and incubating early-stage projects.