MetaCoaster: The NFT roller coaster project with a dizzying experience

Founded in 2021, Crypto Blockchain Industries (CBI) is a French company that specializes in the development, management and acquisition of blockchain projects.

In October 2021, CBI operated a direct listing of its shares — similar to how Coinbase did in 2021 — on the Paris Stock Exchange under the ticker ALCBI, becoming the first French company specializing in blockchain to be listed on the stock exchange.

CBI is led by Frédéric Chesnais, who started his career as an investment banker for many years before joining the video game industry in 2001 as CEO of Atari Interactive. He left Atari in 2007, continuing his career as an executive producer by creating his own investment company, only to buy out Atari — then in bankruptcy — in 2013, becoming its largest shareholder. He handed over the reins of Atari to a new team more than a year ago to focus on the promising field of blockchain and the metaverse. This led to the creation of CBI, which launched the development of AlphaVerse — its own metaverse.

AlphaVerse strives to be an entry point into every metaverse through the AlphaVerse Hub, with its alpha version available this summer. The Hub allows visiting several metaverses from a single location. With AlphaVerse, CBI’s ambition is to become the entry point for all metaverses.

The platform aspires to give access to an infinite number of universes developed by AlphaVerse or by third parties.

MetaCoaster, the first-ever roller coaster game on the blockchain

MetaCoaster will be the first play-to-earn (P2E) game developed by AlphaVerse. It is an amusement park management game, multiplayer and single-player. The P2E, massively multiplayer mode will feature roller coasters, flat riders and restaurant nonfungible tokens (NFTs), while scenery, auxiliary buildings and roads will serve as classic in-game objects. 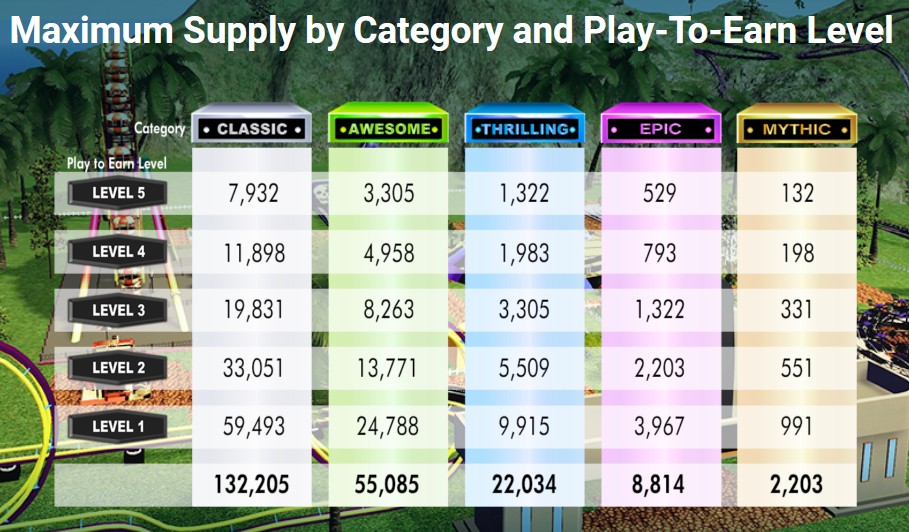 A casual gaming concept on the blockchain

The multiplayer mode, titled MetaWorld, comprises 132,205 plots of land where players can build the parks of their dreams. Of course, these plots are NFTs, and the first ones are already available for auction on OpenSea on the Ethereum network. The land is also available on the Polygon network.

The P2E economy of MetaCoaster

The goal of MetaCoaster is to allow everyone access to the game and set up a balanced economy with attractive prices accessible to smaller wallets.

This opportunity is refreshing when considering the current prices of most NFTs. However, note that it will require several roller coasters, rides and restaurants to design a balanced park.

Inflationary models, such as the one Axie Infinity utilizes with its Small Love Potion, are currently showing their limits. Moreover, some P2E games still work on a first-come-first-serve model that penalize late entrants

To solve the shortcomings of existing games, MetaCoaster has set up an innovative system.

The earning feature is based on the sales volume of the game’s attractions — roller coasters, rides and restaurants. Seventy percent of MetaCoaster’s primary attraction sales are reinjected into the game economy, solving the issue of inflation and sales pressures many P2E games face.

The reinjected 70% is put into the reserve at a rate of 0.27% daily to avoid the reserve being drained by some players’ hasty token withdrawals.

Sign up for the newsletter to get the latest updates about MetaCoaster and AlphaVerse.