Meter.io has launched its fully-featured mainnet, named “Tesla”, with staking and on-chain auctions starting on March 22, 2021.

Meter is a highly decentralized Ethereum scaling solution with a built-in metastable gas currency. It functions as a layer-two side chain for Ethereum and connects Ethereum with other public chains.

Meter just completed its Warring Stakes testnet last week, with 528 validators running the network with an average block period of 2.33 seconds. Earlier benchmark testing has shown that the network could process 1,500 transactions per second on each chain. The team is expecting Meter to become the most decentralized and fastest layer-two side chain for Ethereum with its mainnet launch.

Meter introduced an Ethereum backward compatible mode that allows developers to use the existing Ethereum toolchain and libraries to migrate Ethereum decentralized applications to the layer two with almost no modifications. Layer-two deposits and withdrawals for Ethereum are expected to come in April.

Comparing Meter with other scaling protocols

Meter is now the world’s first and only heterogenous (PoW and PoS) multi-blockchain network. It is also the only mainnet implementation of the HotStuff consensus.

The following table compares Meter with other Ethereum scaling solutions with multi-billion dollar valuations. Meter excels in almost all aspects, with a market cap of a mere $15 million at the time of writing. 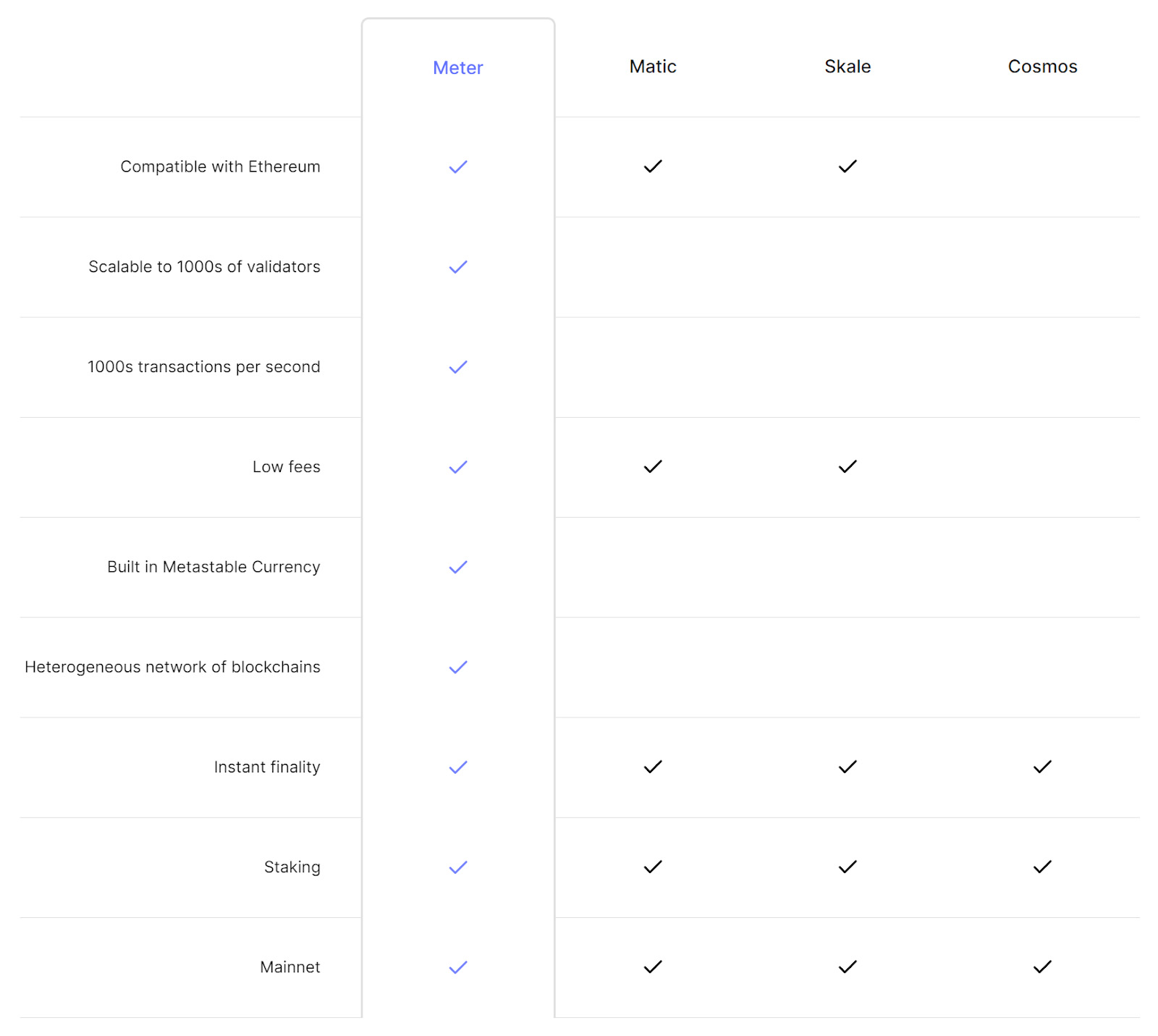 You can stake the mainnet MTRG using the native Meter wallet to earn MTRG or MTR and help to secure the Meter network.

Depending on the staking participation ratio, the APR will likely be greater than 20%. There are currently over 560,000 MTRG staked.

You can stake MTRG directly as a PoS validator or delegate to other validator candidates on the network.

The minimum requirement to become a validator candidate on the Meter mainnet is 2,000 MTRG, and the minimum amount to stake is 100 MTRG.

Details and instructions on how to stake MTRG are available here.

One of the most important use cases of the MTR token is obtaining MTRG to participate in the safeguarding, governance and growth of the Meter system.

Now that the mainnet is fully launched, the Meter team will focus on building more products on its network and expanding the ecosystem.