Los Angeles — Dec. 21, 2021 — The season four release of Mint was announced today, a leading audio and video series exploring how the creators of today are building the communities of tomorrow using Web3 primitives like social tokens, NFTs and DAOs, to name a few. Check out the first episode here.

Those who register for season four will be able to claim an exclusive Mint POAP proving one’s participation in this month’s series. As Mint’s community develops, claimed POAPs will unlock future perks and provide access to unique content, proposal votes and more. Those interested can get theirs now by submitting their email to the site. 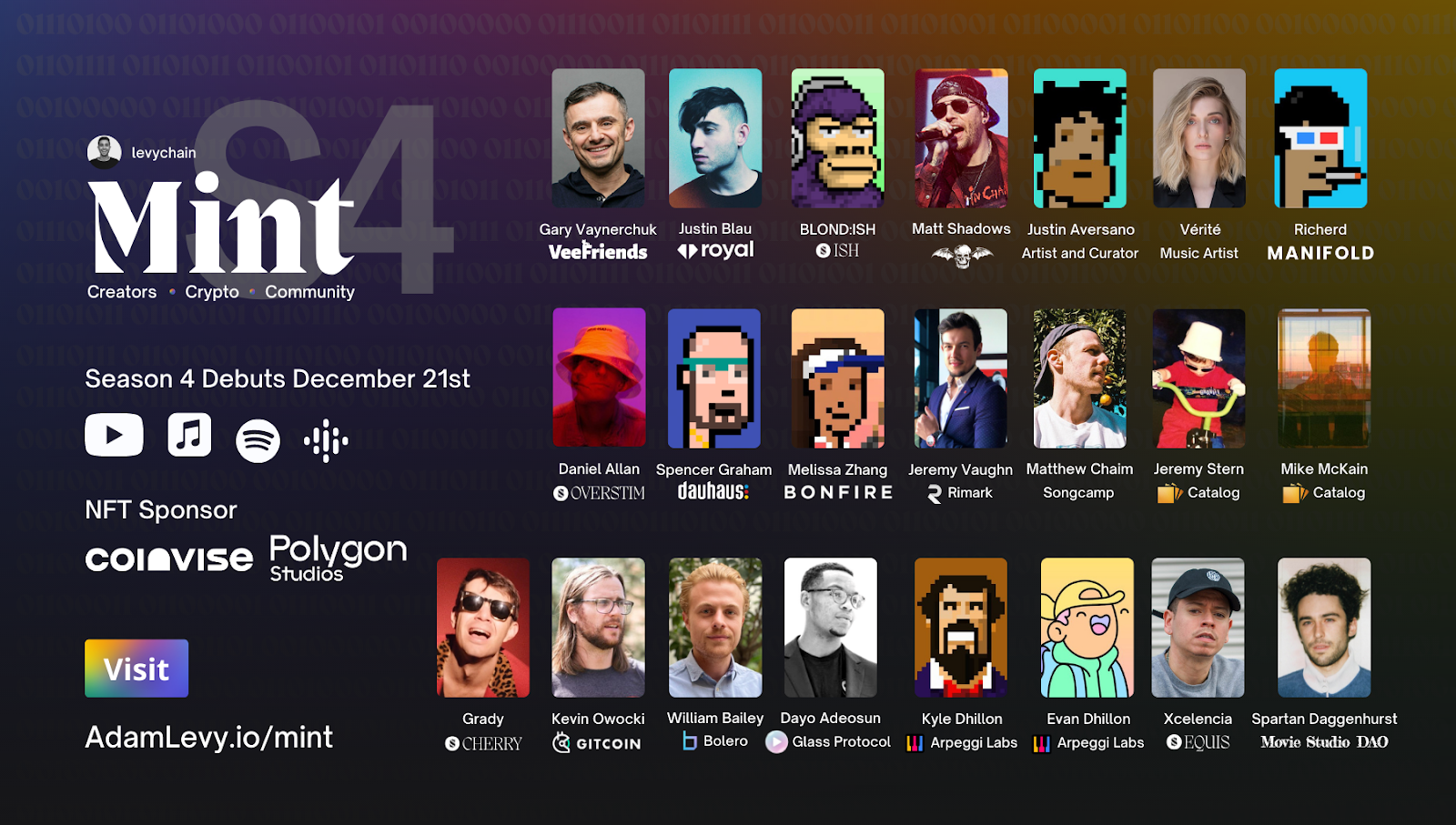 Today’s premiere of season four includes 20 exclusive episodes consisting of one-on-one interviews from top Web3 creators, investors and founders, all collectively tinkering with cryptography to help make their creator economy a reality. Available to enjoy across all video and audio streaming platforms, the podcast answers the most frequent questions from creators and communities when tinkering with Web3 primitives.

“Season four welcomes some of the brightest people building in Web3, and I’m so excited to be sharing their stories across 20 hours of content,” said Mint founder and host Adam Levy. “I’m hoping that future creators and Web3 communities leverage their stories when kickstarting their own path into the crazy world of crypto.”

From modern fan clubs where the people own the artist to multi-million-dollar communities surfacing overnight, this season welcomes the best stories emerging out of Web3. Hear the untold journeys from 20 notable creators, founders and thought leaders.

Gary Vaynerchuk: The chairman of VaynerX, a modern-day media and communications holding company, and the active CEO of both VaynerMedia and the widely-popular NFT community VeeFriends.

Matt Shadows: Aka M. Shadows, an American singer and songwriter best known as the lead vocalist, songwriter and founding member of heavy metal band Avenged Sevenfold, and now the founder of the NFT community Deathbats Club.

Justin Aversano: An artist and curator working within the New York City and Los Angeles art scene. He is more recently known for his photography artwork titled, “Twin Flames.”

Richerd: Co-founder of Manifold.xyz, which enables Web3 creators to have true creative ownership, preserve on-chain provenance and interoperate with all major NFT marketplaces.

William Bailey: Founder of Bolero Music, which aims to bring artists and fans closer together via tokenized assets.

Season four sponsors include Coinvise and Polygon Studios, supporting Mint by collecting the show’s non-transferable NFTs. The NFTs grant each sponsor a shared vote into proposals, ideas and future updates being implemented into Mint’s ecosystem as well as certain promotions across the entire season.

Submit your email to receive all 20 episodes for free.

Mint with Adam Levy is a new audio and video series exploring how the creators of today are building the communities of tomorrow using Web3 primitives like social tokens, NFTs and DAOs. Each month, a new season rolls out, with 10 to 15 untold journeys from notable creators, Web3 founders and thought leaders who are tinkering with social money to make their creator economy a reality.

Learn more by visiting the site.