New cryptocurrency cat trend, Schrodinger, shoots up over 500% in 4 days

In the cryptocurrency industry, the past months have seen the rise of dog meme coins inspired by many Infuencers. Dogecoin (DOGE), Shiba Inu (SHIB) and particularly Floki Inu (FLOKI), now sits at a market capitalization of approximately $2.4 billion at the time of publishing this article. Lately, there has been a new wave of cat memes coins inspired by Schrodinger. It is now apparent that a new trend of cat memes is taking over the bull market, as Bitcoin (BTC) hits an all-time high of $68,641.

Schrodinger, (Kitty Dinger), launched on October 30th and, trading on the decentralized Uniswap exchange, is currently at a market capitalization of $6.9 million. The token has a total supply of 1 trillion and a 10% transaction fee on every transaction; of which 2% is redistributed to holders as passive income; 1% is added back into the liquidity pool; and 5% and 2% goes into the marketing and development fund, respectively. When compared to Floki, the token has a potential token price increase of about 3630%. Notably, Kitty Dinger generated a trading volume of approximately $2 million on the day of its launch. 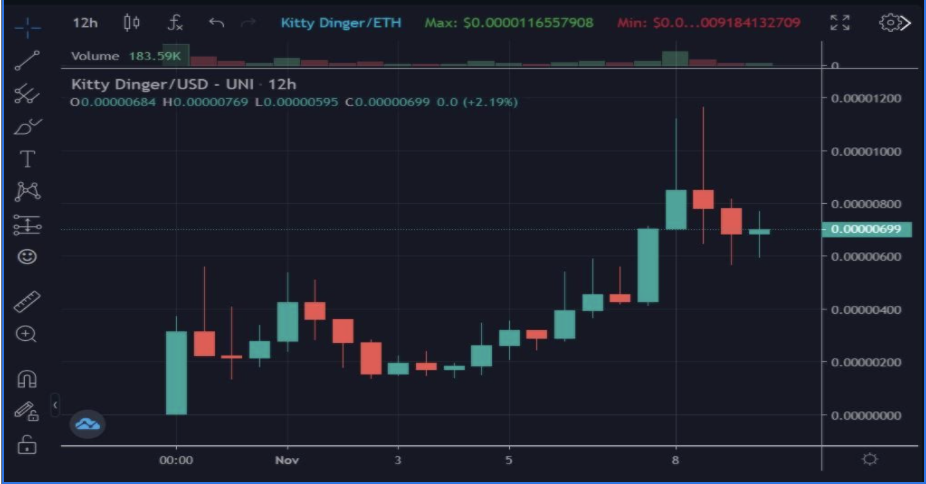 Hitherto, the team has shown some dedication and commitment to the project. To gain the trust of its community of investors, the liquidity pool was locked for one year with the assurance of extending the lock time as development commences and the project expands. Furthermore, the team has verified its identity with Assuredfi, a DeFi company that provides private identity verification (KYC) services to project owners.

Schrodinger has proven to be a very promising project that has goals transcending short-term plans and it sticks out from the majority of meme coins inundating the decentralized finance space through its development of decentralized applications aimed at solving targeted challenges.

With proper funding, KittUp wallet will be developed to integrate multiple addresses on many different blockchains as well as other features which will be revealed as the development commences. The KittUp wallet is scheduled to be released in November.

The team has begun the development of the Schrodinger play-to-earn game set to be released in January. Online video games have become more prevalent in recent years. Most people find online games attractive and a modest way to spend free time from their hectic schedules. The Schrodinger P2E game will be a fun and relaxing way for its community to earn daily passive income.

To help tackle the problem of rugs and scams in decentralized finance, Kittypad will provide its holders early access to safe projects with a relatively high potential of success. Strict measures will be taken to ensure the credibility of developers to reduce any risk of scams.

Memes are great, but what if they could bring about real change? Kitty Dinger aims to support charity foundations worldwide by providing necessary supplies and monetary funds to those in need. The team believes that by creating a community-driven token that supports and is intrinsically linked to non-profits over the long term, we can all benefit.

Since its inception, Schrodinger has raised over $400,000 for its development and sustenance. This value, as programmed in the token’s contract, will grow even larger as the trading volume surges. Some of these funds have been used to support the Plant-A-Seed movement by Kimbal Musk’s Big Green foundation, in collaboration with the Million Gardens Movement community of gardeners who want to inspire a happier and healthier world by educating and supporting millions of new gardeners to grow their food. The team has made it clear they intend to be a long-term donation partner of the Big Green foundation and are currently putting in the works to make it formal.

Through its official telegram group, on November 4th, Schrodinger announced its partnership with Gokhshtein media, one of the top blockchain media outlets founded by David Gokhshstein, a member of the Forbes Financial Council, who has a massive Twitter following of 494,000.