Newton Project, a Blockchain Amazon is Going to Huobi Prime

Newton Project (token: NEW) is in store for Huobi Prime 2nd launch on Tuesday, April 16. Newton Project is the infrastructure for the community economy, whose vision is to create a freer, fairer, and more open global economy by providing a better means for community governance, collaboration, and motivation. Huobi Prime is a selective token listing channel of Huobi Global exchange, aims to explore potential blockchain applications, gather industry resources and promote the development of blockchain ecosystem.

"User experience and customer satisfaction are key for us so this is just part of what will be an ongoing process," said Ross Zhang, Head of Marketing for Huobi Group. "We will evaluate the response to each launch we do and strive to keep making Huobi Prime better and better."

“Listed on Huobi is an important milestone for our project,” said Xu Jizhe, the Founder of Newton. “Newton will take this opportunity to make greater impact. We believe that everyone should benefit from economic growth, and we will devote ourselves to it.” 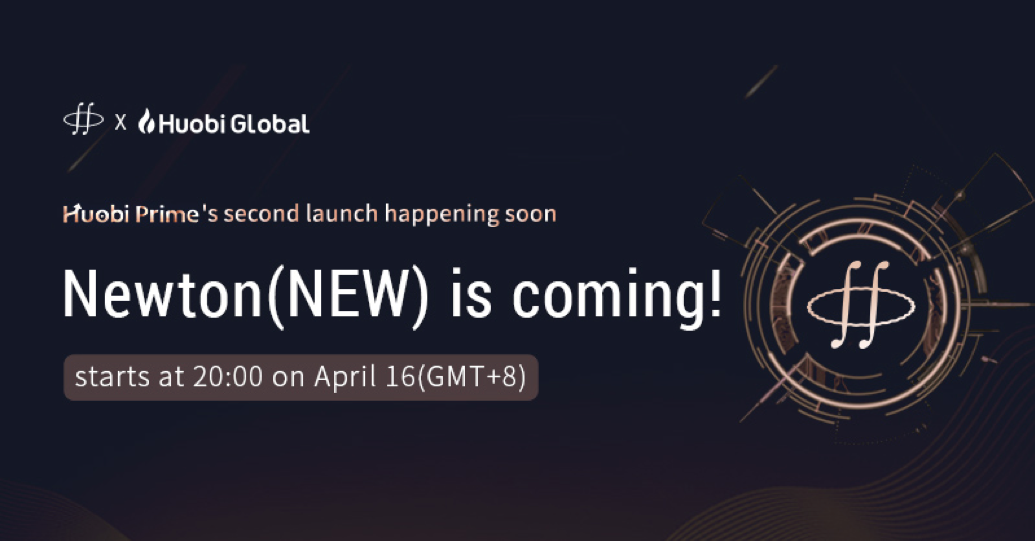 Newton Project was founded in 2018, through more than 1 year’s development. On March 15, 2019 NewPay 1.0, the digital wallet of the Newton community economy, was launched, for the first time including community governance functions. And within 25 days, Newpay has already had more than 130,000 downloads in App Store and Google Play Market since launched. NewMall (an online mall for Chain-Commerce developed by Newton), which is named by the industry as “blockchain Amazon”, has already launched on Newton TestNet and will be officially released soon. Any transactions on NewMall will win NEW tokens as contribution rewards, by this way to fulfill Newton’s vision: “everyone should benefit from the economic growth”. Meanwhile, the NEW token serves as proof of rights in the Newton ecosystem; platform growth adds value to these rights. Moreover, Newton’s NewIoT devices, trusted logistics channel products, and anti-counterfeiting traceability can be achieved by using NewChain, while transactional data on NewMall is fully owned by users.

The launch of NewMall marks that for the first time blockchain has served the real economy at scale. Now, Newton has entered 89 countries, with 32 Telegram groups for overseas countries totaling over 170,000 community members. On this basis, Newton expects to serve 100 million people within the next five years.

Newton 's advisors include Theodore Gray, Co-Founder of Wolfram Research and Creator of the Mathematica Notebook System; Li Songbo, former CTO of Sina and Partner at DFJ Venture Capital; and Masanari Koike, Visiting Fellow at the Department of Social Sciences, Research Center for Japanese Studies at Tsinghua University. Newton 's investors include BlockVC and Liu Jun, Co-Founder of Lightinthebox as well as others.