Osiris Browser promises users a superb Web 3.0 experience with better security and privacy. Recently, Osiris was widely discussed by China’s largest blockchain media outlet, Golden Finance, and it has established itself as the third-largest blockchain browser following Opera and Brave. But does it actually deliver or is it just another box of tricks?

It’s hard to trust web browsers these days because most provide a false sense of security. Can you truly feel at ease with all the controversies about the amount of information that browsers collect and how it is used?

Companies often resort to advertisements to generate income, but the trouble with browsers that rely on advertising revenue models is that Big Tech often favors earnings over user privacy. After all, it’s been proven multiple times that traditional browsers collect user data for their financial gain. Even the so-called privacy-focused Brave browser makes money by pushing ads to users.

However, Osiris Browser, a new entrant in the browser scene, rejects the advertising revenue model for generating income. Is that even possible? Let’s find out.

Browsers collect information that may invade user privacy and security “to provide better search results,” but are actually a means to earn revenue through advertisements. Convenience became Big Tech’s excuse to start tracking and profiling users and make money off our browsing behavior.

Google Chrome came under fire because of the amount of user data it collected. A Forbes article published in March 2021 even pointed out that Chrome links collected information to user identities, which meant that Chrome was profiling users to benefit its advertising business model.

Mozilla Firefox offers better user protection but users have to manually adjust the settings on Firefox. It requires separate extensions to block advertisements, which increases the risk of installing malicious programs.

Brave browser claims to be a secure, privacy-centric browser that offers default anti-tracking and aggressive ad-blocking technologies. However, it also heavily relies on advertisements, which is very evident when users open a new tab only to see a landing page with a full-page advertisement and affiliate widget which forces products to users by default.

Brave’s BAT token is also advertisement revenue-focused since its main utility is to reward users who allow the browser to show them ads. User trust also declined in 2020 when it was discovered that the browser automatically appended Brave’s referral ID when accessing Binance. Once again, the advertising revenue model exercised a great influence.

Osiris Browser also touts itself as a privacy-centric browser. Osiris claims that it is a blockchain-based browser that blocks all advertisements and trackers by default and boldly adds that it doesn’t need revenue from advertisements.

Osiris Browser’s concept is intriguing because it allows users to interact with blockchain technologies right out of the box.

But is there something more to Osiris than meets the eye?

Osiris Browser: The good and bad

Osiris Browser’s interface is clean and users can easily access Osiris Armor, which effectively blocks all advertisements on websites and YouTube videos. It also blocks information collection scripts presented in cookies. Ad-blocking is effective, but how can Osiris sustain a zero-ads business model?

The answer lies in having a well-architected alternative revenue stream through its own Metawallet and the Acent mainnet. 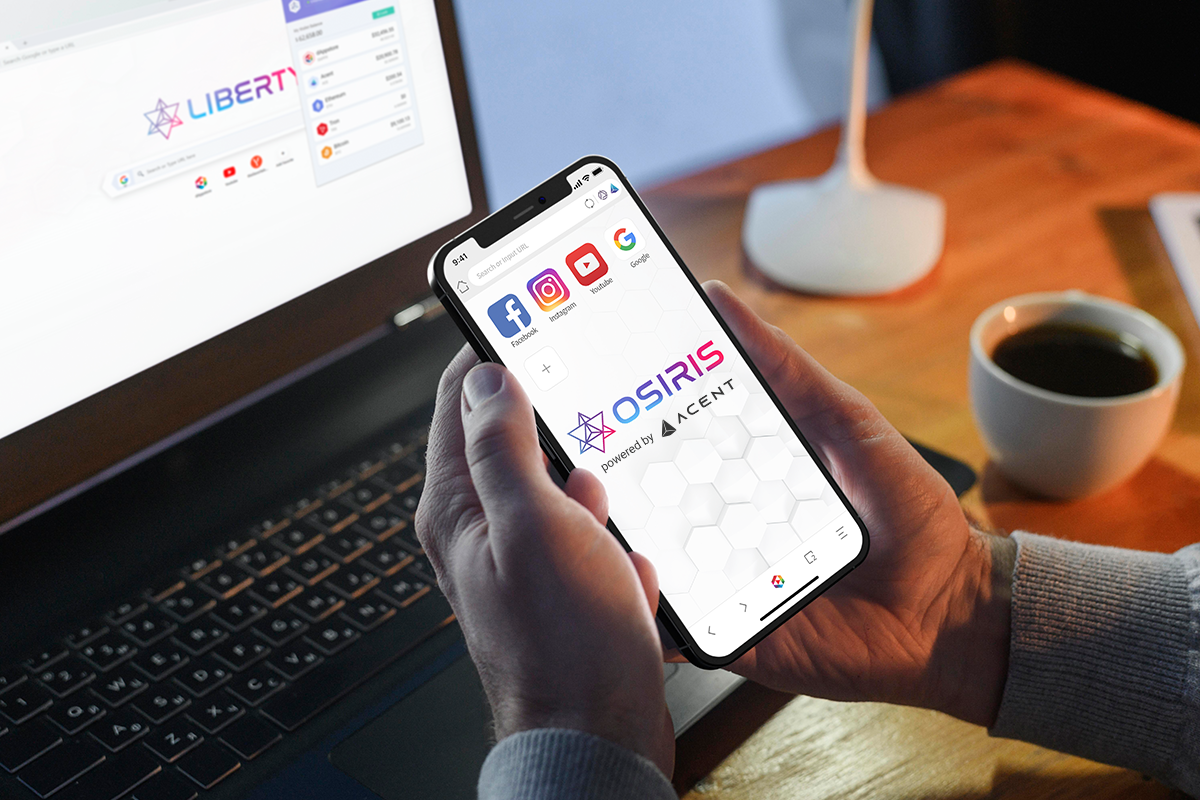 According to its Medium, Osiris runs on the Acent blockchain, which will launch its mainnet soon, and is designed to work as an inter-chain second layer solution for most major blockchain networks to push mainstream adoption of blockchain technology. It is supposedly compatible and faster than the Ethereum network and will generate revenue through increasing the utility of Acent (ACE) and partnerships that would drive active usage of the network.

Its built-in wallet is supposedly a blockchain-agnostic Metawallet that links second layer solutions, is capable of higher and faster transactions per second, and promotes interconnectivity between most major blockchains such as Ethereum, Bitcoin, Tron and Polkadot through its Acent blockchain. Osiris presently has active users in 137 countries and its ACE token is already listed on KuCoin. What’s best is that its recent Tron integration now allows it to seamlessly process Tron transactions in real-time and render Tron decentralized applications through Metawallet and the Acent blockchain.

Apart from its uncensored liberty search engine, Osiris claims to be building an anonymous browsing mode and a free VPN service.

But Osiris is not without concerns.

Osiris is still in its early stages, so there are bugs that don’t appear in mature browsers anymore. Furthermore, it remains to be seen whether it can truly deliver all of its plans because the Acent mainnet won’t be deployed until Q4 2021.

Conclusion: Worth keeping an eye out for big upside potential

It’s still too early to decide if Osiris can really give the full Web 3.0 experience, but it’s definitely no clickbait when it comes to blocking advertisements. The prospects also seem positive because the Acent community is active and developer interest is picking up.

It’s a good project with great potential so it’s worth looking into both as a browser and a blockchain. It may be worth keeping track of to see if it can deliver all its claims and reach its full potential.