PawnHouse, the leading non-standard asset price discovery platform, has completed its first round of fundraising. For strategic purposes, the team limited the total fundraising amount for this round and carefully chose its partners during this first phase of the project. PawnHouse established investment partnerships with top-tier institutions such as Huobi Ventures, A&T Capital and Spark Digital Capital.

PawnHouse’s main products include nonfungible token collateralized loans, a product that has been launched for a month now, as well as a simultaneous multi-round auction (SMRA) system, which is currently under development. Both serve the role of price discovery in the market of NFTs. This is in concurrence with the existing successful loan platform which has transaction volumes achieving $100 million since its launch. The platform announced its token mining plan along with the launch of the loan platform and has attracted many active community members and users who have contributed to the large volumes. With the upcoming SMRA function, PawnHouse expects a larger increase in transaction volumes since an SMRA system will help capital providers in the loan market grasp a better understanding of the market values of different types of NFTs.

From below, readers can understand more details of how PawnHouse can serve as NFT oracles. In its lite paper, PawnHouse analyzed an important difference between fungible token oracles and non-fungible token oracles. In other words, a single independent auction bid only reflects the private value limit of a specific NFT asset. However, the key to determining subsequent liquidity and efficiency of assets is actually the common value. Therefore, an NFT asset price corridor constructed by a sufficient number of well-intentioned quotations is the core of NFT pricing.

The PawnHouse platform was born to improve NFT asset liquidity. Features of the platform are set to roll out in three stages. The first stage would be the ability to facilitate collateralized loan and liquidity mining, followed by pawn ticket transfers and pledge mining, and lastly, introducing SMRA systems with a solid price corridor. The three stages are dedicated to developing non-standard asset pricing tools through public and private information. Currently, the online version 1.0 only provides an NFT-based collateralized loan function, allowing users to obtain PawnHouse (PH) tokens by providing capital.

The chart below details the daily trading volume since PawnHouse went live on June 20, 2021. 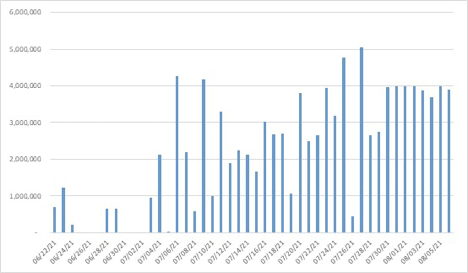 The core innovation of PawnHouse lies in the SMRA pricing mechanism, which is the latest theoretical proposal from the 2020 Nobel Prize winners in Economics and will be implemented in the third stage of the PawnHouse platform. The disclosure of information in an SMRA is superior to the traditional British auction model by avoiding the winner’s curse and preventing seller losses. Also, the SMRA system is widely used in the real world and has generated more than $200 billion in economic value since its inception. We believe PawnHouse’s full range of products will bring an exciting and legitimate future to the NFT industry.

From the PawnHouse perspective, the behavior of “bidding” itself is part of the formation of commodity prices. Using the SMRA system generates more meaningful and comprehensive user data. Some examples of the possibilities are discovering the common value or “public price expectation” of a certain NFT type that could potentially serve as the price oracle for the market. Additionally, using the SMRA function helps increase an asset’s popularity and demand while creating comprehensive quotation references. Comparing similar category assets in the same auction and analyzing the comprehensive information generated during the auction can help the successful bidder to avoid the winner’s curse, while also providing the seller with the most optimal price.

The project is now currently undergoing its second round of financing, where the rapidly booming speed of capital inflow exemplifies the growing attention paid to NFT infrastructures and the importance of pricing solutions. Please stay tuned and be sure to follow our journey to create a better and more efficient platform for pricing NFTs.