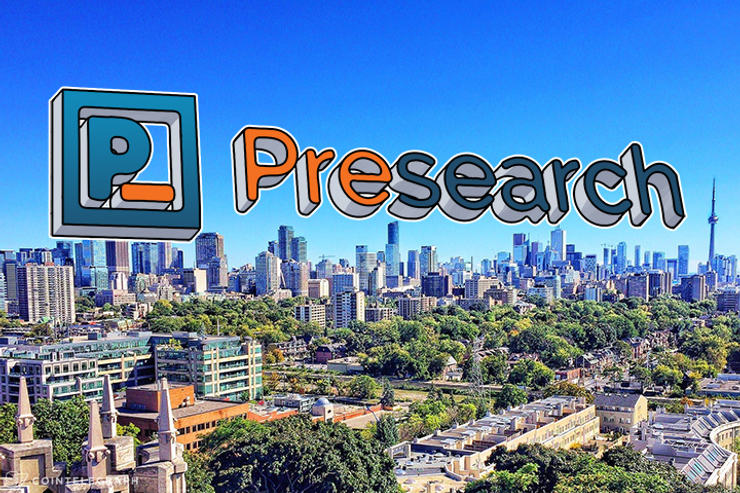 TORONTO - OCTOBER 25, 2017 - Presearch today announced the beta launch of its decentralized, community-driven search engine built to disrupt the multi-billion dollar internet search industry. Already in use since 2013 as an internal tool, Presearch will launch in beta November 9th, allowing users to search multiple engines including Amazon and Google and be rewarded in PRE tokens. Presearch has generated more than $12 million in revenue from its ongoing token sale. Lot 5 of PRE tokens will be available to the public on November 14, 2017.

Anthony Di Iorio, co-founder of Ethereum and the founder of Jaxx, has joined Presearch’s advisory board to help guide the development of its blockchain-based service.

“The power of blockchain technology lies in its real-world use cases, and Presearch demonstrates this with a compelling alternative to search engines run by global corporations,” said Anthony Di Iorio. “I look forward to using Presearch myself, and advocating for its growth in the blockchain community and beyond.”

“We are thrilled to have an entrepreneur of Anthony Di Iorio’s calibre join the Presearch Advisory Team. Anthony has a compelling vision for the blockchain space, and we are excited to work with him on the project and get his feedback on our beta release,” said Colin Pape, Presearch Founder and Project Lead.

Presearch’s transparent ranking factors combine human curation with scalable machine learning, a contrast to manipulated algorithm-driven methods standard among today’s industry giants. In a world in which one company controls 77 percent of all searches, influencing trillions in spending and acting as a primary gatekeeper to the Internet, proponents of decentralized technologies see a pressing need for a community-driven search engine.

By rewarding members for using, promoting, and contributing to the Presearch platform, the company will create a scalable “Wikipedia for search” to discover the best content for each inquiry. Presearch’s curation and overall development of the platform is incentivized with the Presearch Token (PRE). A community-based decision-making process ensures everyone’s interests are aligned. The Presearch community can also vote on and fund new development projects, continually optimizing the platform.