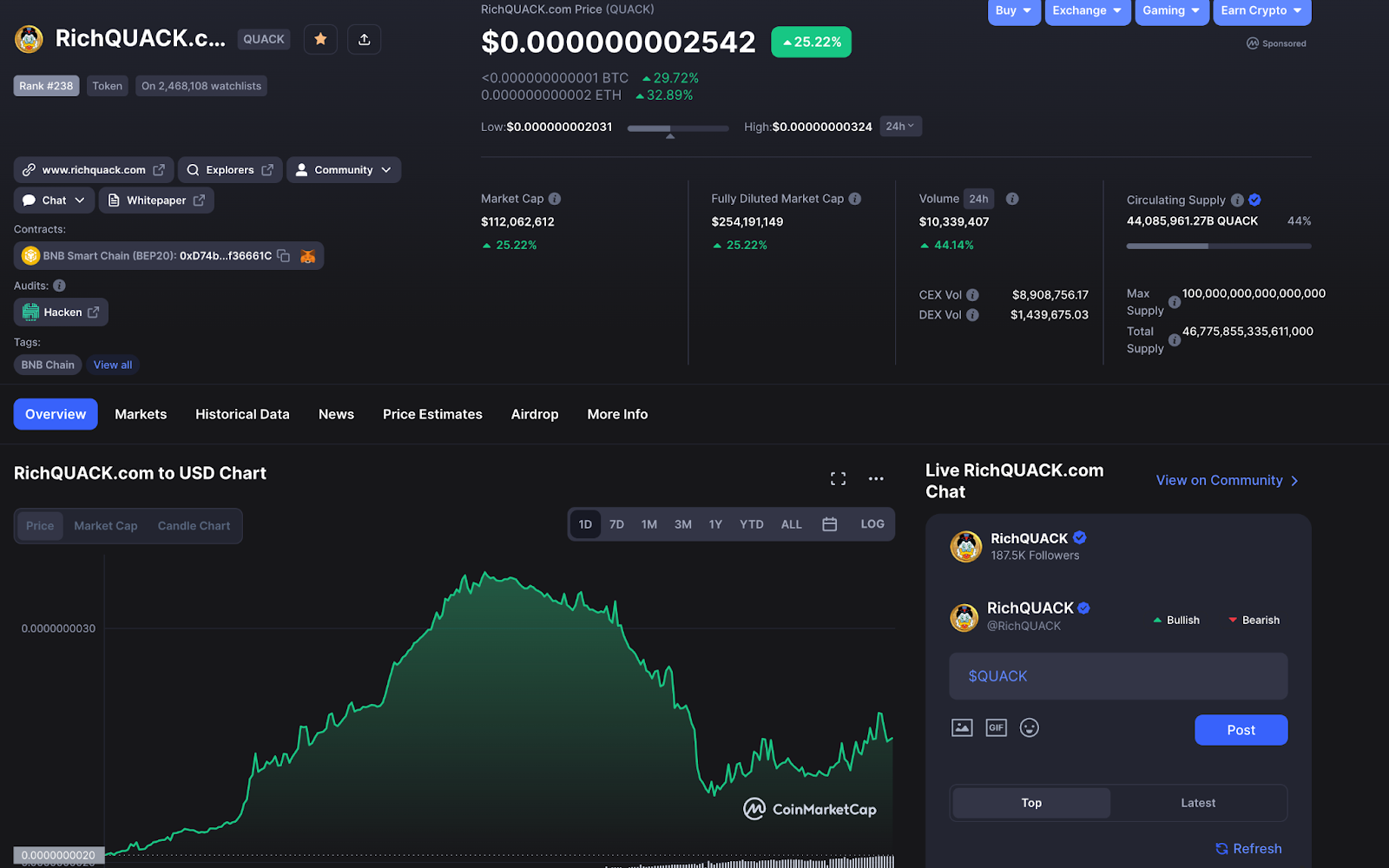 RichQuack pumped again overnight, with the memecoin peaking as high as 66% in the past 12 hours.

QUACK has retraced as investors and traders took profits on Thursday morning, but the coin is still up 24% in the past 24 hours.

Zoom out, and the price is even better, with investors up 155% in seven days and more than 200% in a month.

Investors who bought at that time have made 400% if they still held until now.

The burn mechanism works by attaching a 12% fee for each transaction — although holders are rewarded.

Each transaction distributes 4% back to holders, another 4% to the QUACK-BNB liquidity pool, 2% to pump and burn wallets, and 2% to the marketing and developer wallet.

The RichQUACK developers have also introduced other quirks that have made it attractive to speculative investors.

There is an anti-whale feature, which means no single wallet can hold more than 1% of the total supply, and sales are restricted to a maximum of 1% of the supply, while developer liquidity is locked for five years as an anti-rug pull mechanism.

RichQuack is also developing a launchpad and incubator for other projects, with QUACK holders voting on which projects move forward and getting rewards from them, benefiting with early access to their initial coin offerings and initial decentralized exchange offerings.

The roadmap also promises upcoming play-to-earn games and even a RichQuack metaverse.

It’s unclear what exactly has sparked the sudden pump in the last 30 days, but the RichQuack community is extremely active on social media.

Rival memecoin projects do not come close to competing with the QUACK community, which is consistently top-of-charts that show social media activity and impressions.

While that would be expected amid a massive pump for the coin, RichQuack has been consistently top in recent weeks.

For volume, it is now fourth, just over $9 million, below DOGE and SHIB.

QUACK is also top of the bullish sentiment charts for memecoins, according to Coinvote, while few holders are selling.

The coin now has more than 130,000 holders, its highest-ever number.

The price of memecoins is particularly difficult to analyze, especially long term.

However, there are several signifiers that can help.

QUACK’s massive supply could be seen as both an advantage and a disadvantage, depending on how you look at it.

The robust burn mechanism has taken quadrillions of coins out of the supply, as well as rewarding holders, but the supply does remain huge. It will remain large for a while, and at some point, that supply will become less and less.

However, individual tokens will not have to reach a high price to reward investors with big gains.

If the project can maintain its current social media momentum, then there is no reason it cannot catch up to the likes of DOGE and SHIB.

Those two coins enjoyed exponential growth in 2021 off the backs of community growth and investor momentum with far less utility than the QUACK ecosystem has.

DOGE is still only a peer-to-peer currency, while SHIB has recently added utility, it appears momentum has been lost from that coin.

QUACK has a launchpad and incubator that will benefit holders, and its features, such as rewarding holders with reflections, make it a coin many will want to hold.

It is not unforeseeable that RichQuack, with a current market cap of $110 million, could eventually catch SHIB ($5 billion) and DOGE ($7.5 billion), given how quickly things can catch on in crypto.

RichQuack currently has momentum and brand recognition in the space, which often counts for a lot, especially with memecoins.