Meme-currencies are all the rage in 2021 and the majority of them are dominating the crypto market. The tokens also command a larger-than-life fan following with a market cap that reaches billions of dollars. The new entrant to the meme segment is RichQUACK and the token had a stellar run during its initial days.

RichQUACK was launched on June 9, 2021, and traded in the indices at a modest price of $0.000000000098. However, the token dipped during the first week of October and reached an all-time low of $0.000000000012. Since then, RichQUACK dusted itself from the rubble and forged ahead, creating new all-time highs every two weeks.

RichQUACK is an incubator, launchpad and raffle platform that aims to deliver a variety of technical innovations. First, the launchpad is designed to be a safe investment for everyone, especially QUACK holders. They have an incubator system that will strictly filter out risky and bad investments — meaning that it is necessary to submit the ID of the incubator applicants so that the RichQUACK team will have their data — just in case. They will monitor the development activities of the incubated projects before launching the token on the launchpad/QuackPAD, and this could eliminate rug pulls.

To be precise, RichQUACK has spiked +24,821.8% from its all-time low of $0.000000000098 on October 6, 2021. That’s a phenomenal run within just two months and outpaced other meme-tokens in the market. RichQUACK, which trades as QUACK in the indices, rewarded early investors handsomely with gains that would normally take years to earn.

Investors believe RichQUACK could be the next Dogecoin (DOGE) or Shiba Inu (SHIB) and are jumping on the bandwagon to reap the gains. Many investors believe DOGE, SHIB and other meme-tokens have run their course and are unlikely to continue to offer rewards.

Therefore, investors are eyeing new meme-tokens that can take care of their financial ambitions and deliver the desired results. Thus, RichQUACK is gaining attention as it is both new and has room to deliver good financial outcomes.

The meme-token is gaining prominence on social media and word of its existence is quickly spreading within the investors’ community. If QUACK reaches even half the heights of SHIB or DOGE in terms of awareness, its price could propel further and reach another new high. They are even covered on CNN. 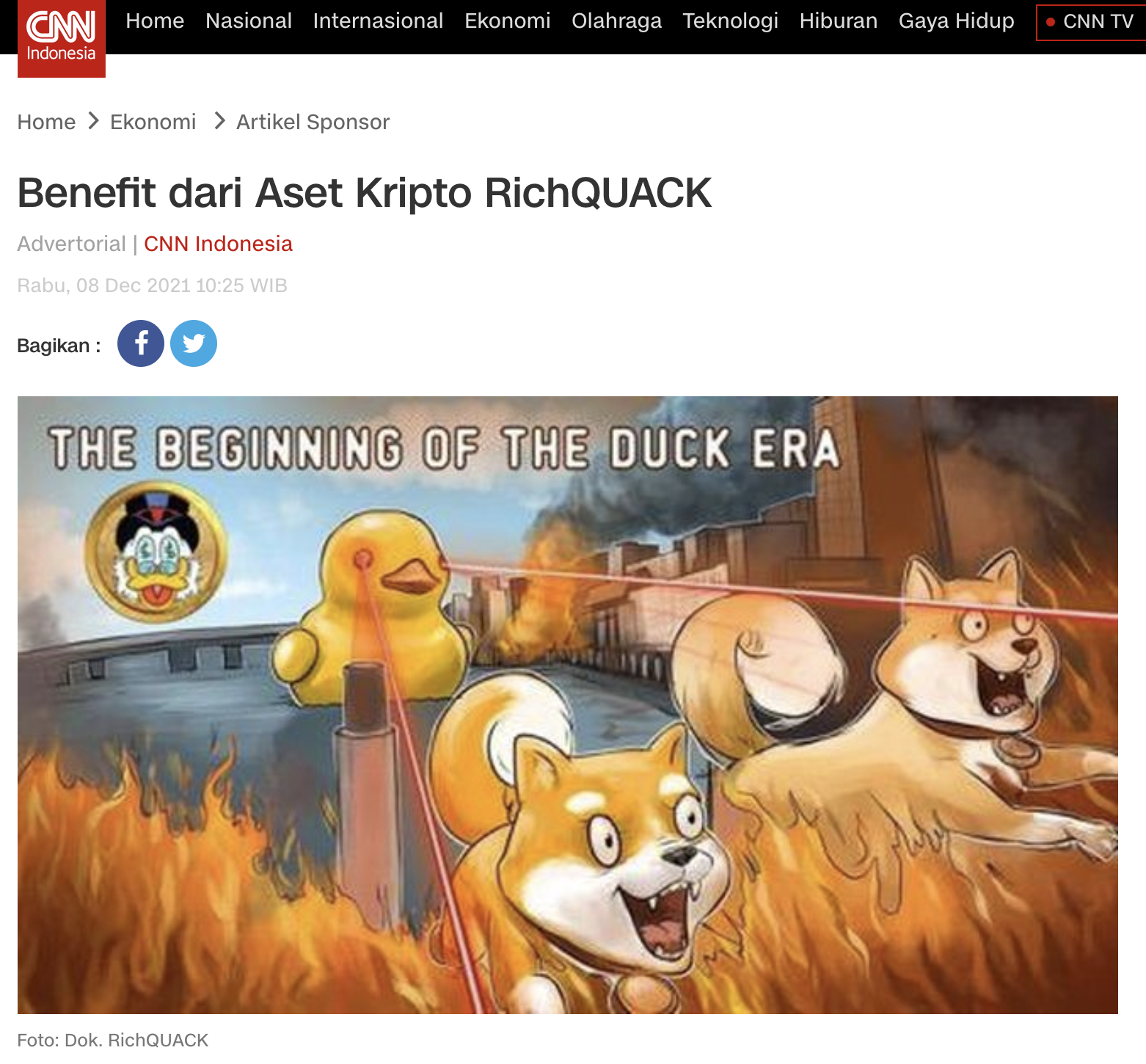 RichQUACK has a market cap of $133 million. Its daily trading volume hovers around the $7 million mark and the token has room to grow in the coming months.

Meme-coins have usually performed well during their initial days and rewarded investors with a fistful of dollars. QUACK is expected to deliver the same and investors who hold on for a year or two can see good gains.

They are also doing QUACKattack campaigns all around the world. We have seen the QUACK Billboard in Times Square, NY and the busiest highway in Istanbul Turkey. They are aiming an all-out attack after their product launch. RichQUACK was just listed on the MEXC exchange, one of the top exchanges globally. They have been listed on 10 centralized exchanges. 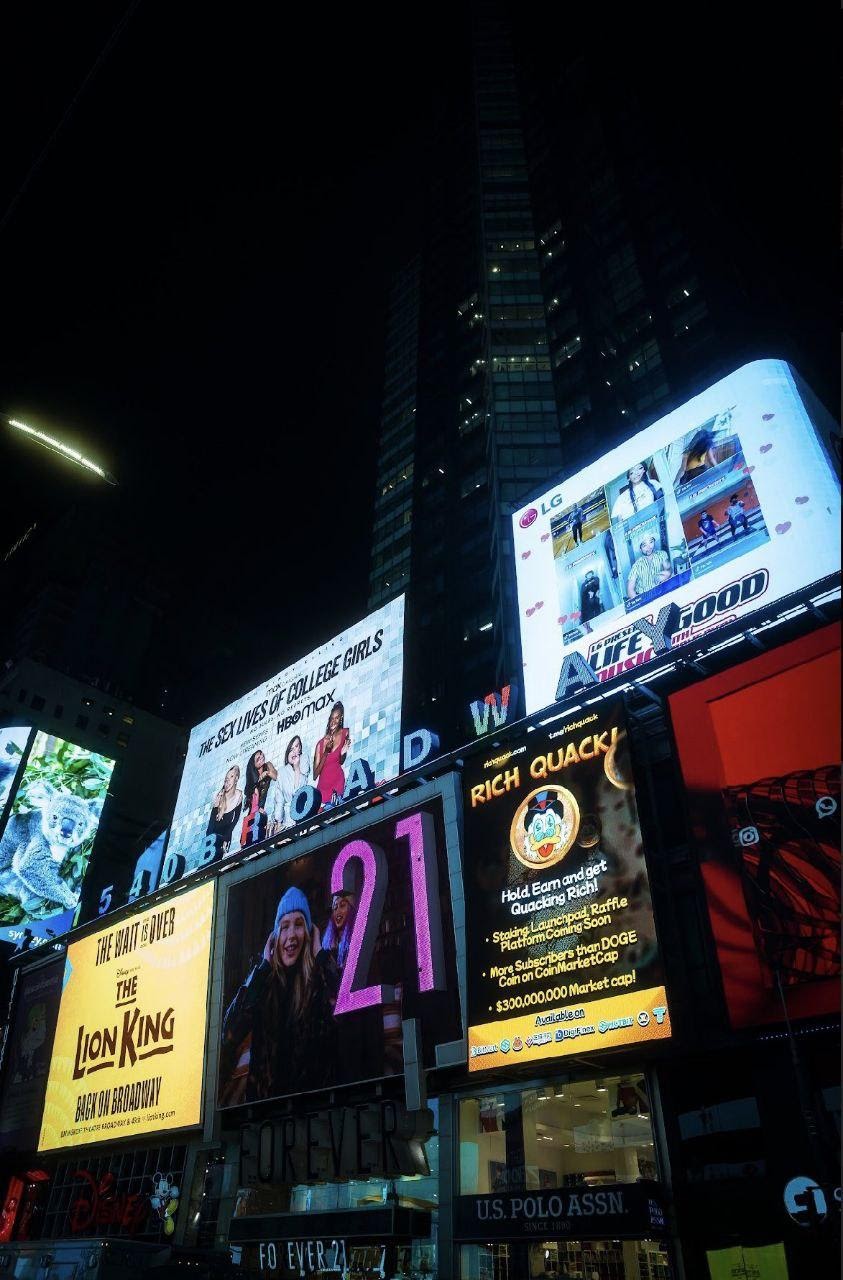 At the time of publishing, RichQUACK was trading at $0.000000002878 and is down -2.4% in the 24-hour day trade. Amazing days are predicted to come. Another exciting news is Cointelegraph is going to cover much more news about RichQUACK.

RichQUACK has over 110,000 followers on Twitter at the time of writing,  and a 69,000 strong community on Telegram. Click here to be part of the QUACK Army now.