April 26, 2022 — Another exciting announcement is coming from RichQuack, a new hyper-deflationary token project backed by a community of more than 217,000 users on Twitter and 61,000 on Telegram. It has announced its first incubated project with the upcoming launch of Earthling. This platform will first support farmers involved in reforestation programs and later expand its portfolio of eco-initiatives. Earthling empowers individuals, families and businesses to take an active part in restoring nature by allowing them to purchase carbon credits on the Earthling platform that help offset carbon emissions. 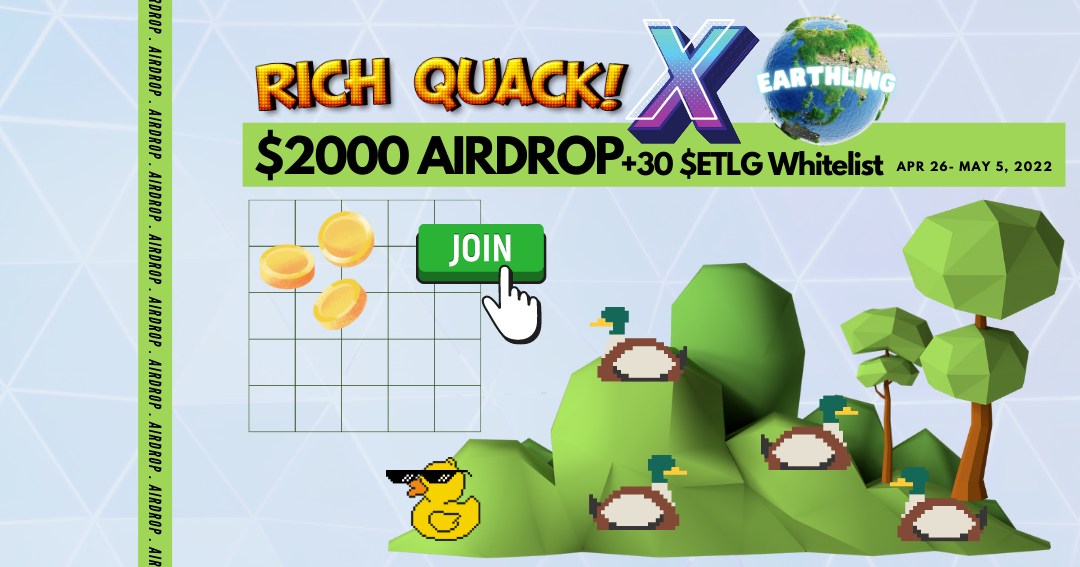 Participate in the RichQuack-Earthling $2,000 airdrop and 30-Earthling (ETLG) whitelist. Refer more friends to win and join the airdrop.

The use of carbon credits, which incentivize companies and individuals to emit less carbon dioxide, is a valuable asset in the fight against climate change, bringing the world closer to becoming carbon neutral. The Katingan Mentaga Project, one of the largest carbon credit reforestation projects, is already generating an impact equivalent to taking 2 million cars off the road each year. The $1-billion carbon credit market continues to grow and has the potential for new opportunities for farmers, who can acquire new revenue streams by growing trees on some of their lands for reforestation efforts.

The Earthling (ETLG) token will be used to fund the project, rewarding users with carbon credits through staking. Earthing will make it easy to measure daily carbon emissions and offset carbon footprints by buying carbon credit through the platform. ETLG also functions as a governance token on the platform. The initial DEX offering (IDO) will take place on RichQuack’s launchpad on May 9.

“We hope by launching Earthing, we are doing our part to prevent climate change,” said a member of the Earthling community. “We are certain Earthling will help unite crypto-enthusiasts worldwide to contain global warming. We welcome anyone who wants to make a difference and give people and organizations a chance to get on board with the great revival driven by responsibility and a sense of community.”

RichQuack is a 100-percent community-driven hyper deflationary token with high liquidity, offering high returns to investors and backed by a community of more than 195,000 on Twitter and 65,000 on Telegram. The RichQuack.com (QUACK) token has strong utilities that include a launchpad, staking and an incubator.