Epic Games recently held a funding round to promote its grand metaverse vision, and for a good reason: The metaverse has the potential to turn the entertainment industry on its head with its incredibly immersive experiences. Here is a breakdown of the concept with three case studies that show the metaverse in action.

The metaverse isn’t a futuristic dream or something from a sci-fi movie — it’s where we’ll spend a lot of our free time in just a few years. It’s a giant virtual space with limitless possibilities for entertainment, business, communication, learning and discovery.

Interaction is key, where users will be able to chat, date, dance, play and even conduct business meetings as avatars, or digital twins. You’ll be able to shape the avatar as you wish to reflect your personality, though it doesn’t have to look like you or even a human at all. For example, the exotic 3D avatars offered by Sensorium Galaxy are showcased below:

All the avatars in the store can be purchased with SENSO tokens at a 20% discount.

Merging many metaverses into one

There will be many smaller metaverses at first that will later become interlinked, forming a mature metaverse with hundreds of spaces of different sizes, created by different developers. The challenge is to merge these metaverses into one interconnected space and be able to move between them seamlessly. Users will want to carry their avatars’ possessions with them and be able to pay for premium content in a uniform way.

SENSO tokens, which are the internal currency of the Sensorium Galaxy metaverse, can become a widespread way to pay in different corners of the metaverse. The project is planning a migration from Ethereum to Substrate, which will connect Sensorium Galaxy with the wider Polkadot ecosystem. Any entertainment project built on Substrate will be able to integrate SENSO.

Entertainment — the center point of the metaverse

A virtual reality metaverse can deliver something that no social media platform, game or messenger can — a truly immersive experience. Whether it’s meeting with your friends for a chat in a VR cocktail bar (such as the one on the starship in Sensorium Galaxy, which you can experience through a free VR demo or the video teaser), holding a product presentation or viewing some artworks, you feel like you are actually there in the metaverse, thanks to VR.

The sense of presence in virtual reality is so strong that it promotes better training performance. VR is even being used for psychotherapy in a procedure called VR exposure therapy because you can create realistic scenarios where people work through their fears in a safe environment.

Using game design software, you can create any VR environment you want, be it futuristic skyscrapers, lush jungles or others.

Spend time with who you want

For example, in Sensorium Galaxy you can buy tickets to a concert by a famous artist with SENSO tokens and enjoy it together with your friends from around the world who will all be present as avatars, just like the performer.

Sensorium Galaxy’s first world, Prism, will be released in the next few months and focuses on electronic music and VR concerts by some of the best-known artists including David Guetta, Carl Cox, Black Coffee, Eric Prydz and Charlotte de Witte. 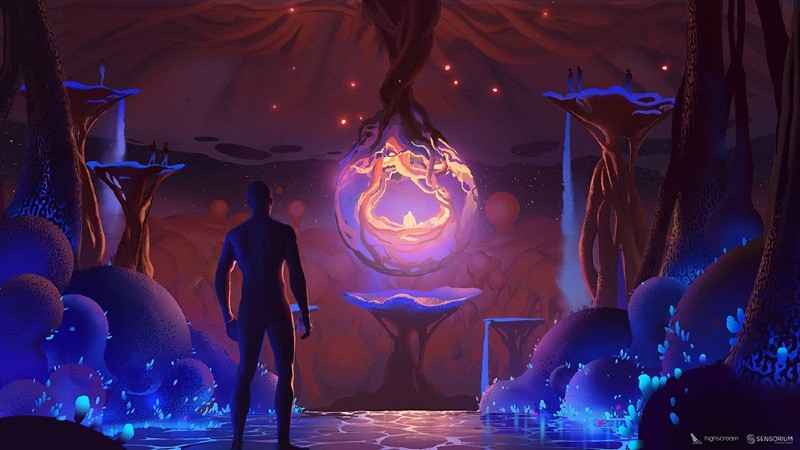 Sensorium Galaxy has signed agreements with half a dozen celebrity artists. Each of them will be scanned down to the smallest movement and facial expression to create a photo-realistic avatar. During the concert, the artist will play a real set from a location of their choice and the audience will see the avatar performing, creating a full illusion of their presence.

The first artist to play a set in Prism will be David Guetta, followed by Carl Cox. Their images and moves have already been scanned and the work on the 3D avatars is underway.

The pilot concert is scheduled for the end of 2021 and users will be able to buy tickets using SENSO tokens as well as bank cards. SENSO is already available on KuCoin, Poloniex, Bittrex and other crypto exchanges. In the past three months, its price has demonstrated considerable growth.

Authentic Artists is another startup that produces concerts and uses artificial intelligence, but its approach is very different. The startup creates virtual DJs and uses AI to generate music sets.

These DJs are not inspired by any real artists; in fact, they look quite funky. Here are some of the performers:

The AI uses a library of over 100,000 music files to generate live sets. Instead of rearranging existing tunes, it composes music on its own in real-time. There is even a feedback algorithm that allows changing the set in accordance with the audience’s reaction.

There is no single coherent metaverse yet, but there are many teams building smaller metaverses or tools that can be used within virtual spaces. The most interesting examples include SENSO and Fortnite but there are dozens of others.