Telos: The On-ramp to Third-generation Blockchain

These charts illustrate DPOS speed and capacity. The top three blockchains in terms of tx/24hrs are EOS, Telos and WAX—all three based on the EOS.IO software. Below these are DPOS chains Bitshares, Tron, and Steemit. Only after these DPOS chains do Bitcoin and Ethereum appear. Together, EOS, Telos and WAX processed 83.7% of the transactions measured by blocktivity.info for the week ending 2019-02-14. 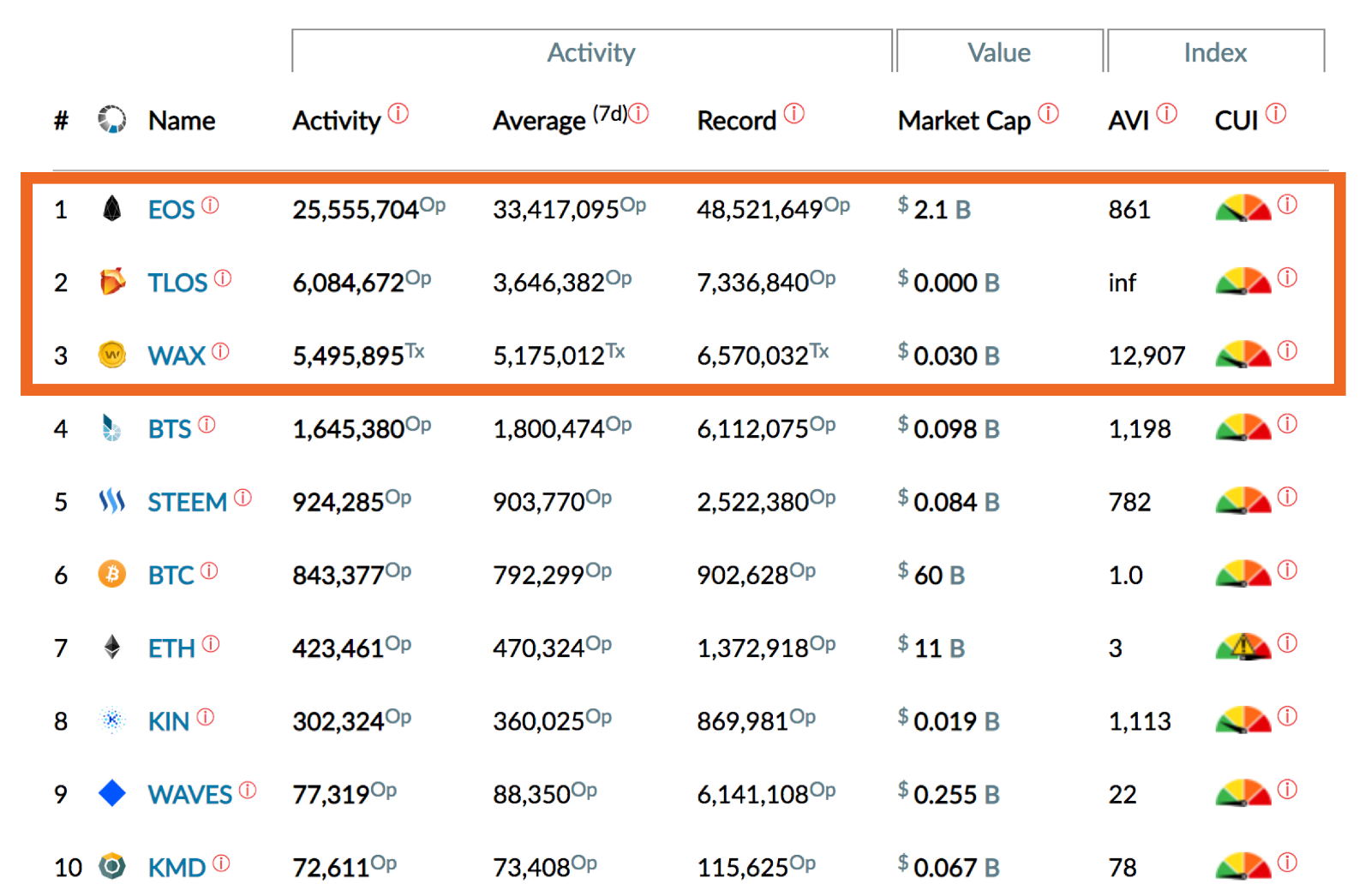 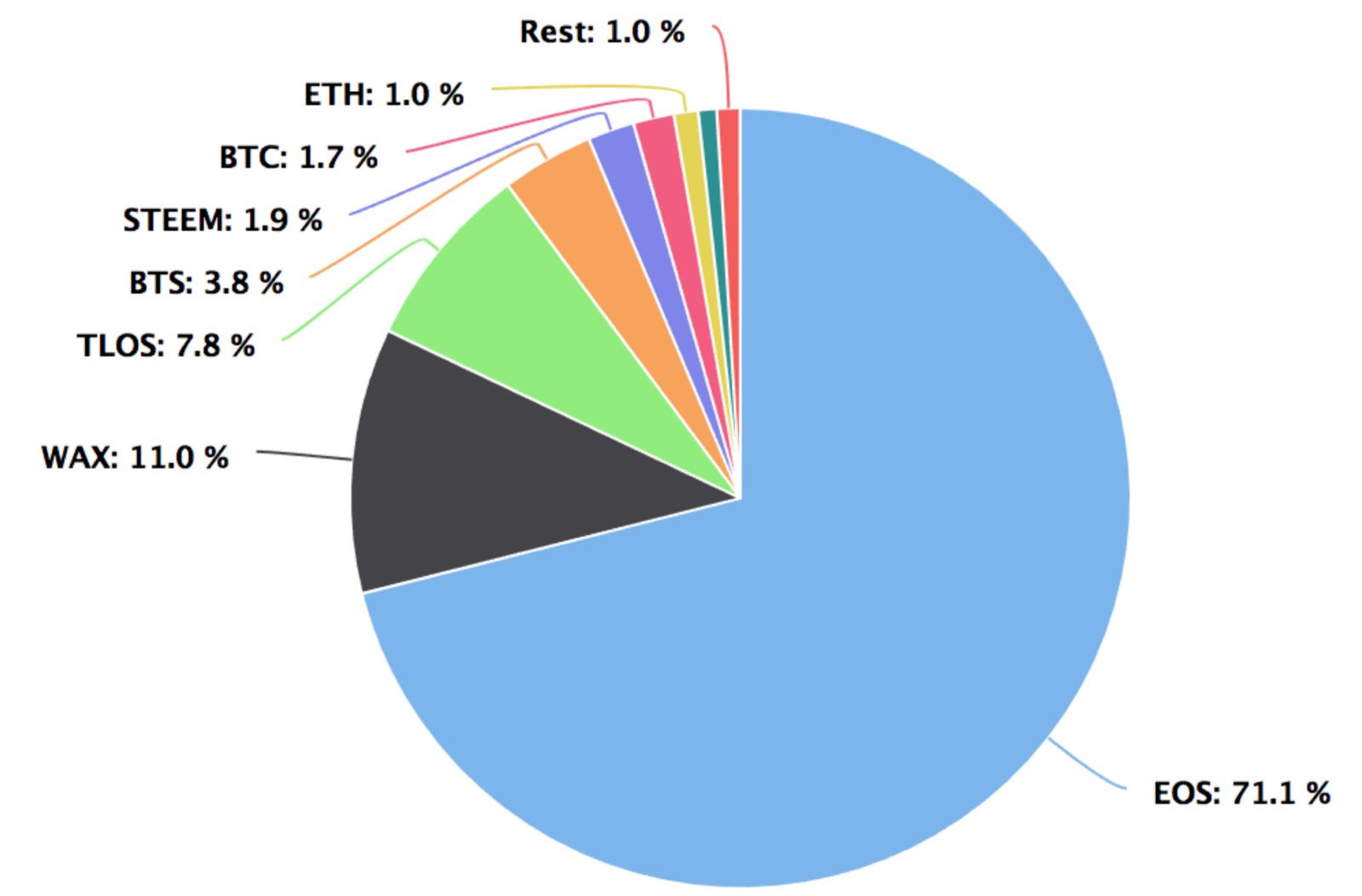 Third-generation blockchain apps on EOS and Tron are steadily pushing Ethereum apps off the charts at DappRadar.com. There isn’t an Ethereum Dapp on the list until #30. (My Crypto Heros). 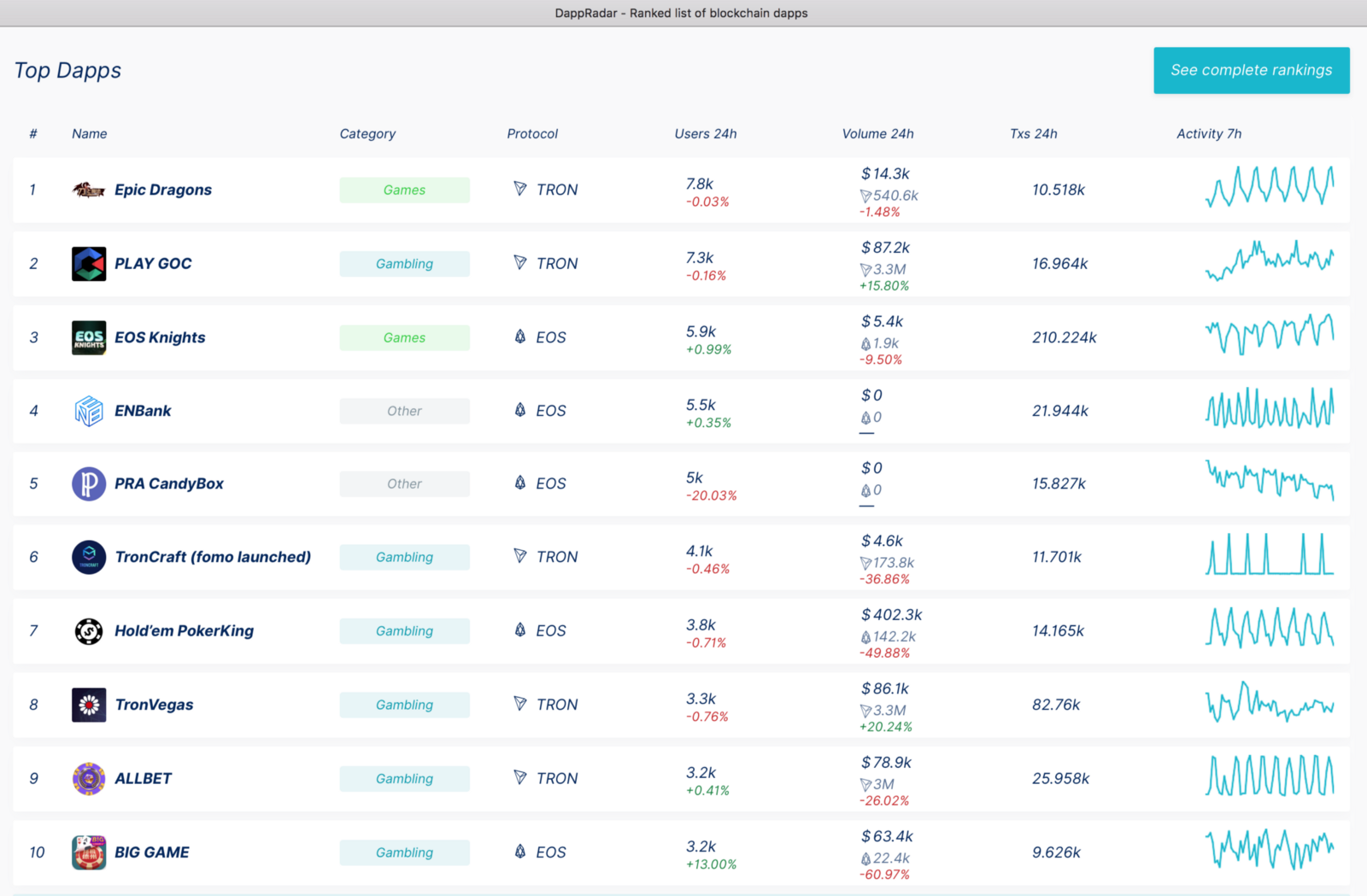 Telos offers clear cost advantages for developers to gain all the benefits of a third-generation blockchain like EOS.IO without prohibitive deployment costs. Telos is a public, decentralized blockchain that is created from the EOS.IO reference software just as EOS is. For app developers, Telos is 100% code compatible with EOS, so any app deployed on EOS could instantly be deployed on Telos as well. But Telos adds clear advantages in the form of tokenomics, chain security and resiliency, and important developer-friendly features that reduce development time and cut costs to deploy.

Telos eliminated the EOS plutocracy by reducing the EOS token supply by 66%, via a cap on <1% of accounts resulting in one of the most economically decentralized of all blockchains. Since EOS and TLOS tokens represent the ability to claim proportionate use of network resources, each TLOS token has the rights to use 3X more network resources than each EOS token. 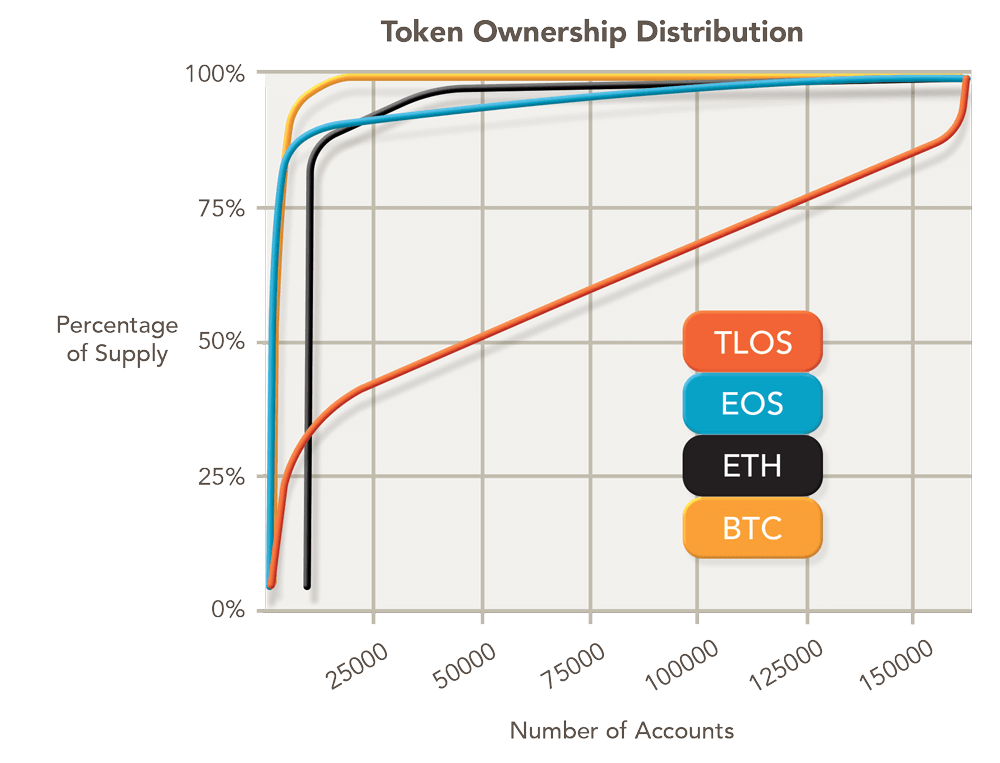 Another advantage related to tokenomics is the cost of onboarding new users. Each EOS or Telos user needs an account with at least a minimal amount of system RAM (3-4KB) and some tokens staked for CPU and NET. On EOS, each user or app that creates the account must bear this cost. Telos has reserved enough tokens to fund the creation of at least 2 million accounts for new users.

An example helps illustrate how much more affordable Telos deployment currently is. For this example, we assume an app with CPU needs of 90 seconds and NET needs of 1GB as well as 100MB of system RAM and intends to onboard 20,000 new users who do not currently have accounts. 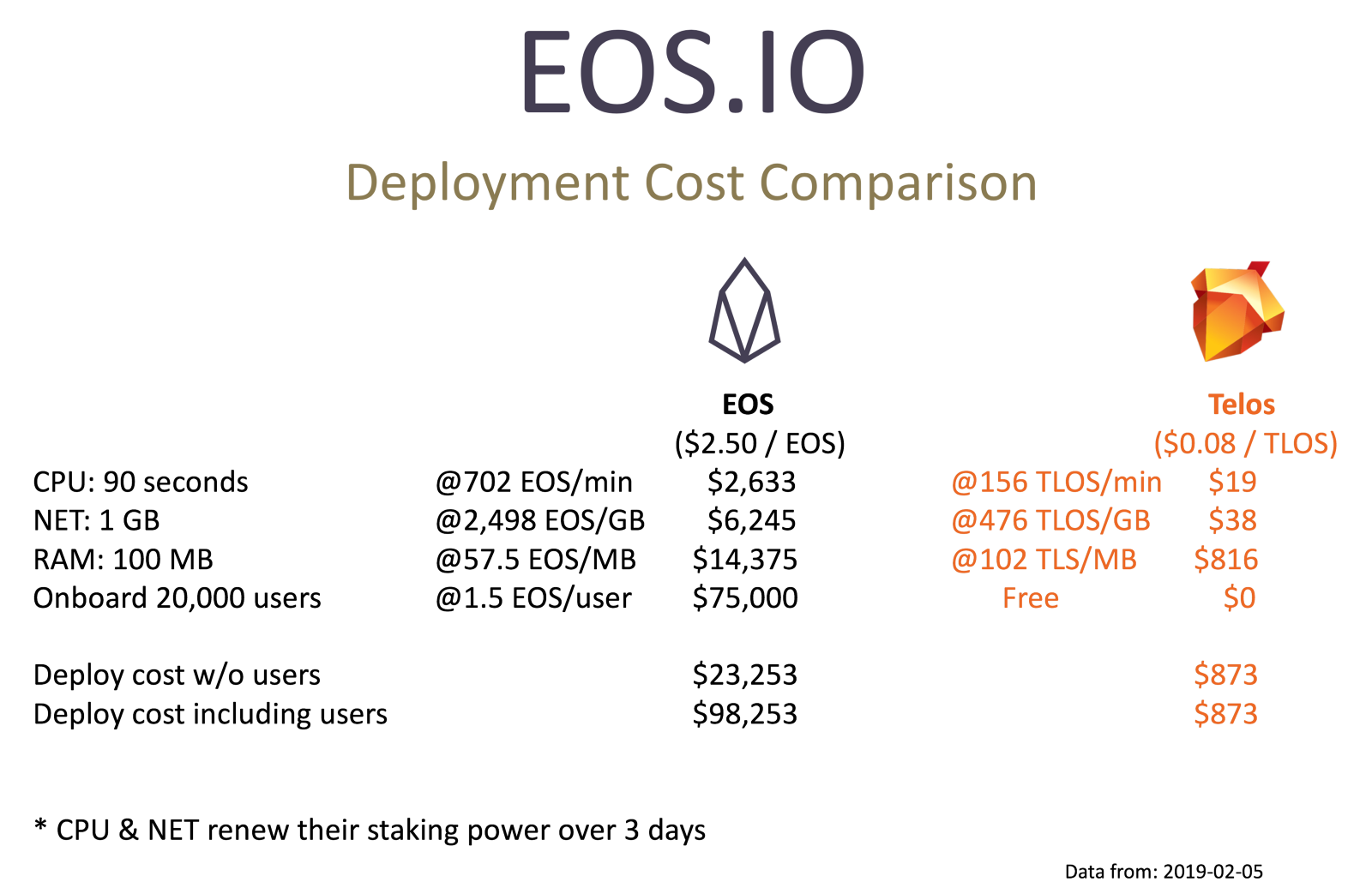 Why Telos Resource Costs are Lower

Telos was launched less than 2 months ago as a grassroots project with no ICO or tokensale. It is currently listed on fewer exchanges and therefore is only charted by services like Blockfolio and CoinGecko, but so far not the industry leader CoinMarketCap.

Telos has its own group of core developers who build, test, document and maintain additional functionality on top of the EOS.IO reference software that Block One develops. The Telos Core Developers (TCD) group is distributed around the world and is the largest such group among the EOS.IO blockchains.

Because Telos has numerous user-voted governance functions, the TCD needed to build its own voting service, which is called Trail. Trail lets any developer quickly implement standard elections, leaderboard elections (multiple candidates for multiple seats), and yes/no issue voting—based on their app’s own tokens.

Blockchains process smart contract data as a single type of storage, RAM. However, RAM is limited and expensive. Telos is the first EOS.IO blockchain to implement IPFS controlled by on-chain data and smart contracts.

As a service to developers performing airdrops, Telos has an ongoing monthly snapshot service that records the snapshot on-chain to reduce costs and development time.

Dapps may tap into the free new account creation funds to create new Telos accounts for their users.

To further lower the resource cost to developers to where it is on par with Ethereum, Telos offers RAM grants through the Telos Foundation and the GoodGrant program, which stakes all necessary NET and CPU for an app for its first year of operation.

Telos creates an on-ramp to third-generation blockchains for developers who want the speed, capacity and fee-less transactions of EOS.IO at an affordable price. Grants like Telos Foundation RAM grants and GoodGrant Resource Staking grants further reduce the deployment costs. Free account creation on Telos for new users drastically reduce the operational and on-boarding costs for these apps. Telos has an engaged user community, leads other blockchain projects in both governance and economic decentralization, and adds numerous innovations and tools to help developers make better decentralized apps.

Any developer considering deploying a decentralized app in 2019 should be looking at Telos as the most cost-effective and feature-rich blockchain available.