The quest for cross-chain bridges: True decentralization is needed

Earlier this month, Vitalik Buterin, co-founder of Ethereum, expressed his concerns surrounding cross-chain bridges in the blockchain ecosystem due to their interdependencies. Map Protocol, as one of the industry players, deeply understands Buterin’s concerns since it is also aware of the security issues cross-chains face. To reply to Buterin’s question: Yes, there is a critical security problem on cross-chain bridges, and currently, none of them have achieved true decentralization yet.

The security problems that current cross-chain bridges face are illustrated by recent multiple exploits. Cross-chain protocols were among those hit hardest by hackers in 2021: THORChain, MultiChain, PolyNetwork, pNetwork, Chainlink and Synapse were all targeted.

Though the entire cross-chain bridge industry is experiencing security breaches, the situation for MultiChain is particularly serious. Recently, hackers have continued to exploit a vulnerability in the cross-chain bridge MultiChain since about $3 million was stolen on Jan. 15. Some might say these are growing pains as the cross-chain field grows rapidly, but there is a singular reason these bridges are helpless in the face of security issues: They are too centralized.

For example, THORChain’s and MultiChain’s architecture is in the form of cold wallet multi-party computation (MPC) custody. MPC, although multi-signature, is still controlled by the person designated by the project. Users’ cross-chain asset contracts are more similar to the management of centralized cold wallets, and this approach has been adopted by centralized exchanges such as Binance. Placing trust in this authority defeats the purpose of using blockchain, resulting in the emergence of distributed exchanges. Current bridges are too centralized and will not stand the test of time.

Decentralization is important in every layer of the stack, but “real decentralization” takes time. Current bridges have made sacrifices or undergone trade-offs to be more centralized. However, they are only a short-term solution to a long-term problem. The bridges that achieve true decentralization will be the long-term winners. With this in mind, Map Protocol is a trustless cross-chain communication protocol that can connect all kinds of blockchains. It puts decentralization at the forefront, and unlike cross-chain bridges in the field, it has no MPC.

True decentralization is ultimately needed, but how can it be achieved? Map Protocol borrows an idea from the cross-chains of Cosmos and Polkadot. Map Protocol shares many features similar to Polkadot and Cosmos, including reliance on cryptographic proof rather than trusted relayers when verifying cross-chain messages, facilitating cross-chain transfers as well cross-chain swaps and the dedicated Map chain adopting proof-of-stake and Byzantine consensus. Yet, the largest difference is that Polkadot and Cosmos have focused on connecting isomorphic chains within their ecosystems. This explains the current isolation state of both realms in the flourishing Ethereum network. With Map Protocol, there is a mission to connect heterogeneous blockchains, and with a dedicated blockchain, necessary features can be added to connect all existing blockchains as well as those yet to come. Accordingly, Map Protocol can become the first-ever “generalized” and “truly decentralized” cross-chain bridge. 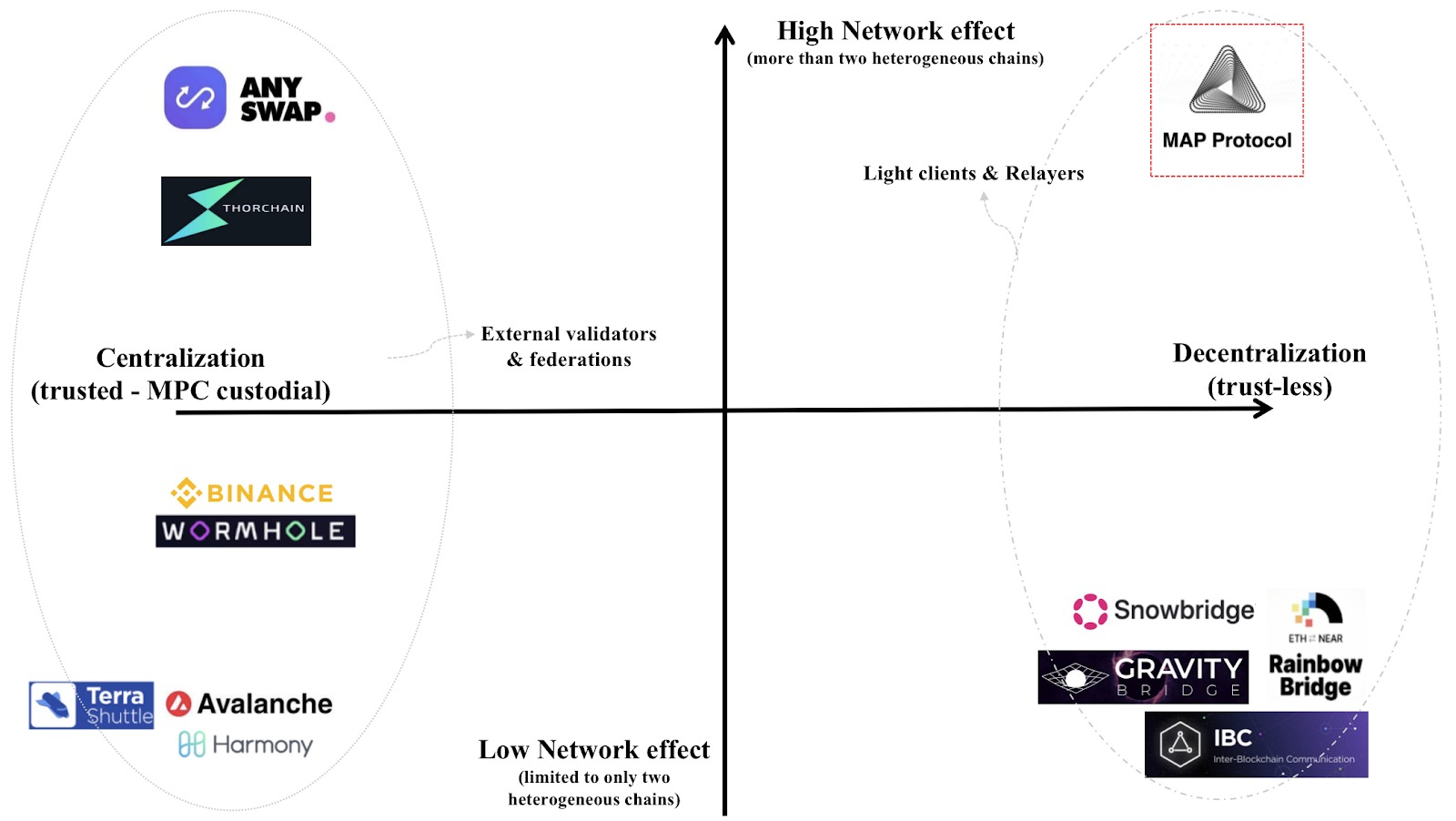 Map Protocol will become the first-ever cross-chain bridge run by a decentralized autonomous organization (DAO). In contrast to the Web3 ethos, the majority of bridges have no participation from the community side, and profit generated from cross-chain fees has nothing to do with its users. Without any DAO, there is no true ethos of Web3 that exists.

This table compares big players in the cross-chain field and Map Protocol: 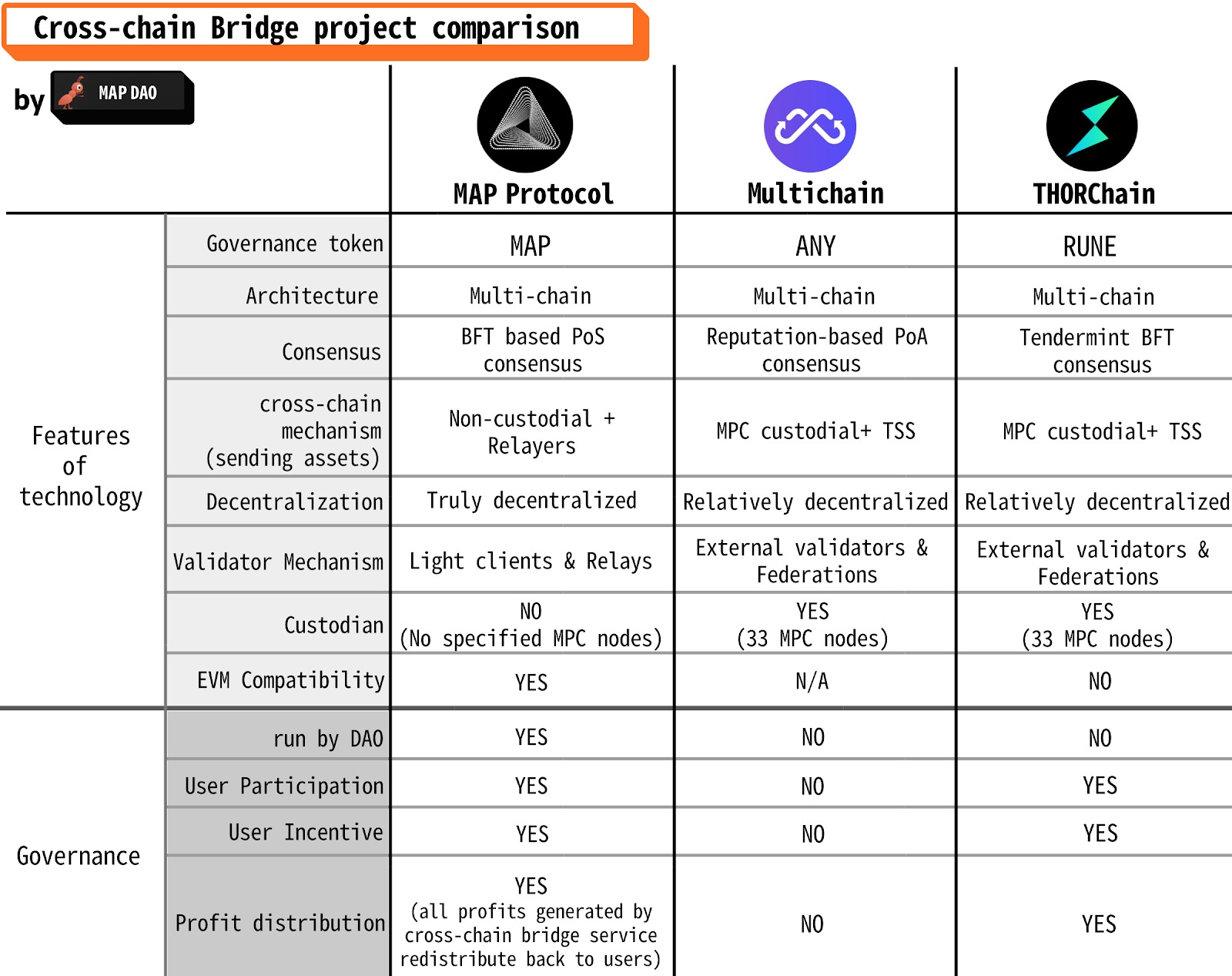 Having cross-chain bridges in place gives projects freedom of choice and enables fair competition: If one network is cheaper or faster than the other one, assets can move freely. However, that is not all: Bridges should be truly decentralized to meet the purpose of blockchain technology. Centralized cross-chain interoperability can be quickly built, but users’ funds are at risk due to the blind trust in a few select parties, as well as the extended attack possibilities. That is the reason behind the technical strategy of Map Protocol. Since the bridges that have achieved true decentralization will be the long-term winners, Map Protocol always strives to live up to blockchain’s original purpose, building a truly decentralized cross-chain bridge run by the community.