Broxus, one of the leading developers of the FreeTON network, has announced that they have made key updates to TON Swap, the FreeTON-powered DEX. The most significant changes are centered around the platform’s farming offerings, which were given expanded parameters on Sept. 3 in conjunction with the sustained growth and increase in liquidity the platform has experienced.

As the summer nears its close, we have continued to unveil new releases and updates aimed at further establishing FreeTON in the DeFi industry. FreeTON, the project that took up development of the Telegram Open Network after Telegram halted production, is a community of developers and enthusiasts that saw the immense potential in the original technology. Rather than letting the promise of TON go to waste, FreeTON decided to build upon and improve it, making it open source, decentralized and grass roots funded.

Since the project’s early days, an ecosystem has crystallized around the network and its TON Crystal token and at Broxus, we have worked closely with other developers to translate the unique capabilities of FreeTON into use cases that can be enjoyed by everyone. One of the brightest stars in the FreeTON constellation has been TON Swap, the platform’s Broxus-powered DEX.

Due to prolonged growth and internal dialogue in the FreeTON community, Broxus has structured a long-term farming program on TON Swap that was set to launch on Sept. 3. Central to the program are the new additions of infinity pools and vesting. With infinity pools, farming pools are now capable of operating without set time limits. While there is no end date for farming, farming speed can be changed without having to create new pools. As it stands now, farming speed can be changed at intervals of a minimum of once every two weeks. While this update is being introduced, the platform’s main WTON mining pools will remain unchanged for the next month, and token rewards will continue to be those that are specified by the pool. 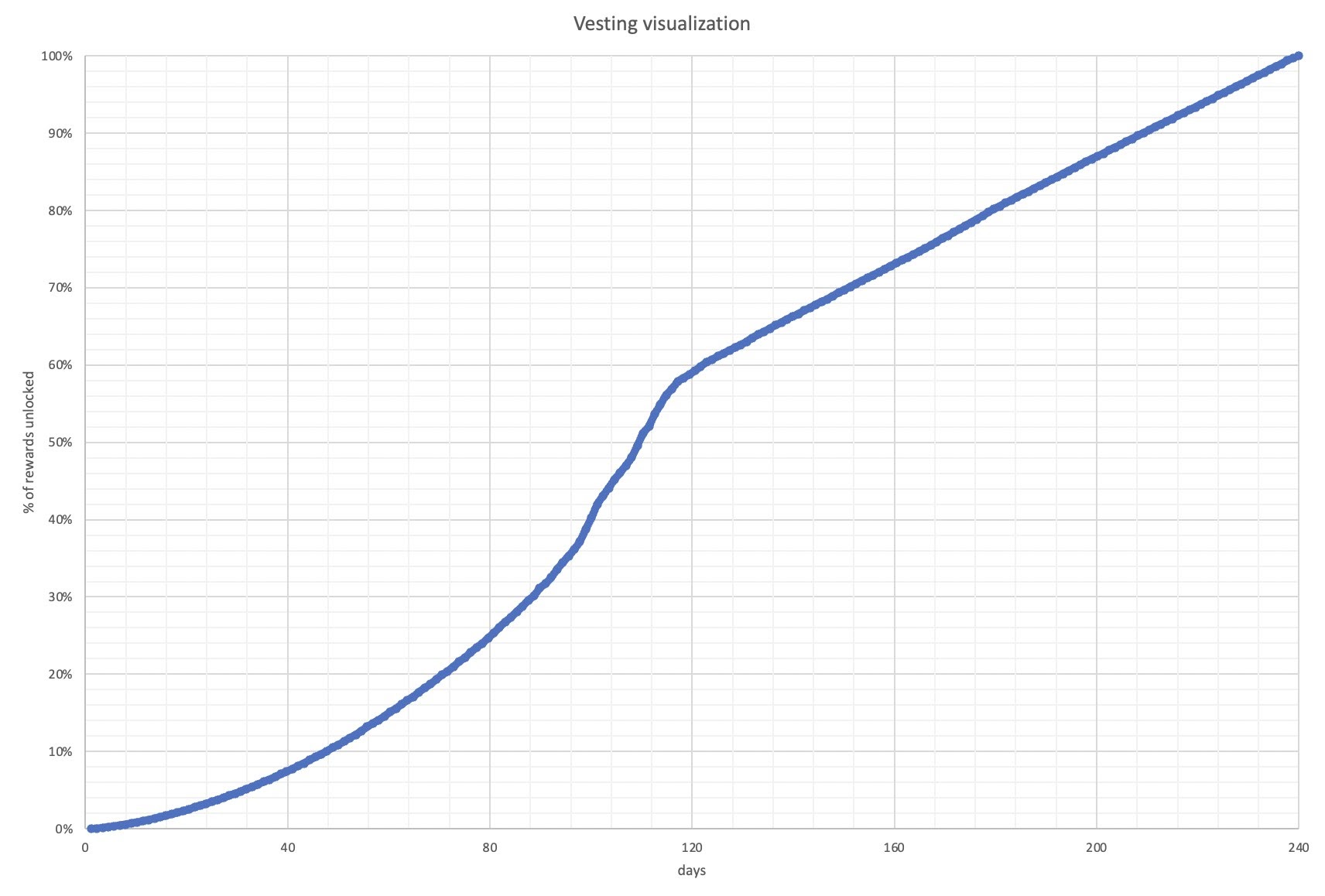 The above chart shows what vesting looks like at a ratio of 100% for 120 days.

The assets that you have earned but that have yet to be unlocked are your entitled earnings. Vesting before is the point at which all of your entitled earnings will be available for unlocking. Another feature has been added for the rare cases in which users are unable to claim their earned rewards because the mining pool does not have enough reward funds. Users will be able to classify their claimed tokens as their reward debt, which will provide them with interest on outstanding rewards.

On top of that, the new farming system has opened the door for farming boosts to be applied to certain pairs to stimulate long-term farming. The boosts will increase farming speeds for tokens that do not make claims and are set to be rolled out during the next platform upgrade.

Beyond that, in connection with the Crystal Handshake program that is working to bring promising DeFi projects into the FreeTON ecosystem, there are a number of new tokens that are slated to be added to TON Swap, which will further expand the DEX’s farming capabilities. Among the projects expected to join TON Swap are:

These changes come as TON Swap has established itself firmly at the center of the FreeTON economy. Currently, there is more TON liquidity on TON Swap than there is on all of the industry’s CEX’s combined and total trading volume on TON Swap is nearing the equivalent of $40 million over its existence. Total net sales of TON currently amounts to a whopping 4.3 million tokens, about 1.5 million of which are the result of token farming. The majority of that farming output is the result of long-term farming projects in the FreeTON ecosystem.

TON Swap has made crucial steps over its past year of development and currently has a TVL figure equivalent to $24 million. Farming has played a central role in the flourishing of the exchange, and long-term farming in particular. The new changes and expansions to the farming program will see those figures continue to rise, with more projects getting involved and adding to the already diverse FreeTON economy.

FreeTON is a fast, secure and scalable network with near-zero fees, which can process up to a million transactions per second, thanks to its unique dynamic sharding technology. As a development built off of the Durov brothers' original TON concept, the FreeTON blockchain is designed to facilitate the widespread adoption of decentralized solutions by millions of users through an unprecedented combination of reliable security, industry-leading scalability and decentralization. The ecosystem features a number of products, including a DEX and bridges with other blockchains.