Geneva, Switzerland, December 16, 2022 – Winners for Season 3 of The TRON Grand Hackathon 2022 have been decided. There were 1185 participants who formed 272 teams that submitted projects in one of six tracks: Web3, DeFi, NFT, GameFi, Ecosystem, and TRON Academy. Season 3 submissions began on September 20 and ended November 14. 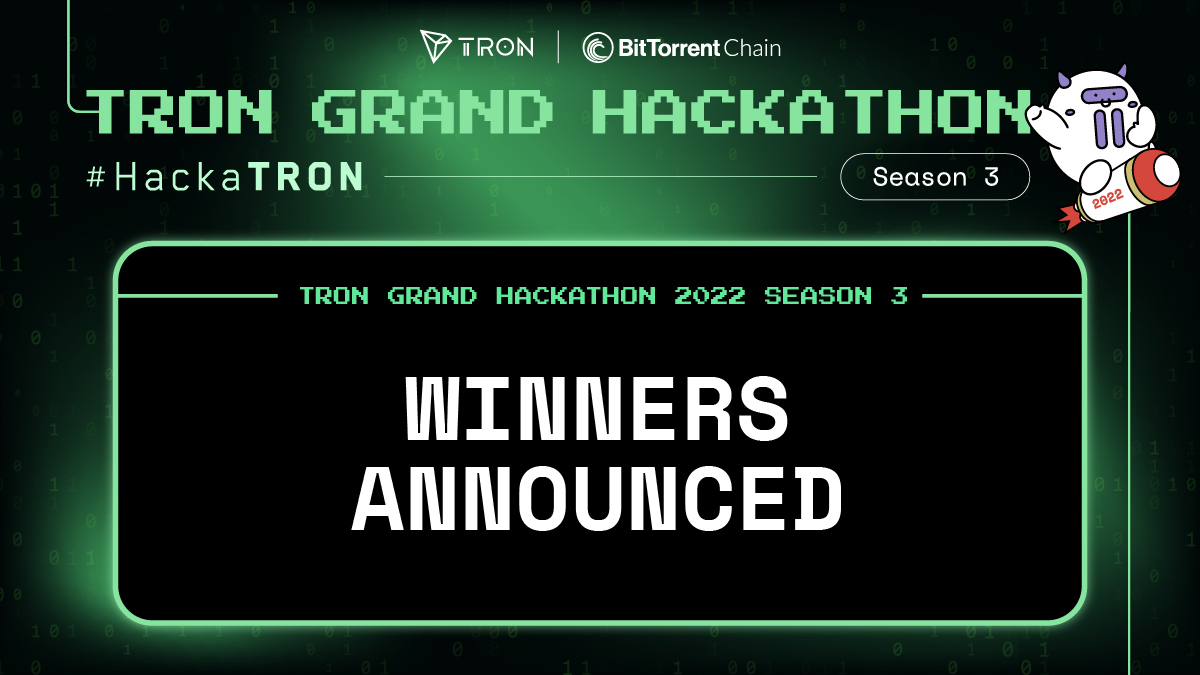 The TRON Grand Hackathon 2022 Season 3 winners selected by our judges are:

The Ecosystem Track features the Ethereum blockchain this season and focuses on attracting Ethereum projects looking to expand their reach into the TRON ecosystem. The Ecosystem Track was split into two categories – technical and creative. Ten total Ecosystem winners were selected with five from each category and the same prize structure for both.

The TRON Academy Track was new this season and involved a face-to-face competition called the “Hacker House.” That portion of the Season 3 HackaTRON was held in person on the campus of Harvard University during the weekend of November 12–13, 2022. Two categories of winners were selected – technical and non-technical. The winners were:

There were three additional bonus prizes given for Season 3:

TRON DAO strives to encourage, equip, and empower blockchain projects in alignment with their vision to decentralize the web. The TRON Grand Hackathon is one essential approach toward that goal, as it aims to support track winners with coaching and funding resources.

Congratulations to the winners of the TRON Grand Hackathon 2022 Season 3 and how they made the TRON/BTTC ecosystem much more inclusive and innovative! Many thanks also to the judges and sponsors who gave time and resources to make Season 3 of the HackaTRON a huge success!

Stay in the know about the upcoming TRON Grand Hackathon Season 4 in 2023 by following the official social media outlets of TRON DAO on Twitter, Instagram, TikTok, YouTube, LinkedIn, Discord, Reddit, and GitHub. Be sure to subscribe to the Around the Block Podcast for insightful interviews and informative contents.

TRON DAO is a community-governed DAO dedicated to accelerating the decentralization of the internet via blockchain technology and dApps.

Founded in September 2017 by H.E. Justin Sun, the TRON network has continued to deliver impressive achievements since MainNet launch in May 2018. July 2018 also marked the ecosystem integration of BitTorrent, a pioneer in decentralized Web3 services boasting over 100 million monthly active users. The TRON network has gained incredible traction in recent years. As of December 2022, it has over 129 million total user accounts on the blockchain, more than 4.4 billion total transactions, and over $9.7 billion in total value locked (TVL), as reported on TRONSCAN. In addition, TRON hosts the largest circulating supply of USD Tether (USDT) stablecoin across the globe, overtaking USDT on Ethereum since April 2021. The TRON network completed full decentralization in December 2021 and is now a community-governed DAO. In May 2022, the over-collateralized decentralized stablecoin USDD was launched on the TRON blockchain, backed by the first-ever crypto reserve for the blockchain industry - TRON DAO Reserve, marking TRON's official entry into decentralized stablecoins. Most recently in October 2022, TRON was designated as the national blockchain for the Commonwealth of Dominica, which is the first time a major public blockchain partnering with a sovereign nation to develop its national blockchain infrastructure. On top of the government’s endorsement to issue Dominica Coin (“DMC”), a blockchain-based fan token to help promote Dominica’s global fanfare, seven existing TRON-based tokens - TRX, BTT, NFT, JST, USDD, USDT, TUSD, have been granted statutory status as authorized digital currency and medium of exchange in the country.