On Oct. 30, TRON tweeted to announce the official launch of BitTorrent Chain (BTTC) test network. BTTC is already compatible with TRON, Ethereum and Binance Smart Chain (BSC). It will also support HECO and OEC in the near future. Down the road, BTTC will arrive on more public chains to deliver its mission of connecting all chains. In the meantime, TRON will earmark $1 billion to spur the migration of projects from Ethereum onto BTTC. 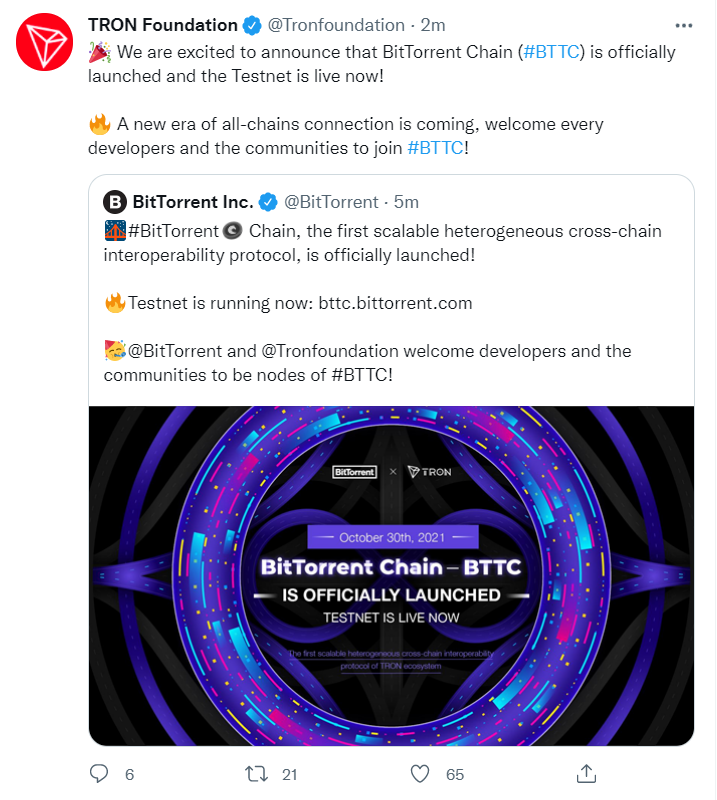 According to our sources, BTTC is co-developed by the core teams of BitTorrent and TRON, and is the first heterogeneous cross-chain interoperability protocol in the industry. It features a PoS consensus mechanism and multi-node validationand supports off-chain matching and smart contract extension through sidechains. These have endowed BTTC with core competencies such as a heterogeneous cross-chain structure, fast and cost-effective transfers and asset security.

By leveraging the fully decentralized BTTC, users are able to transfer mainstream assets among TRON, Ethereum and BSC in a decentralized manner without any limit, according to the open letter by TRON founder Justin Sun on TRON's new vision and the official launch of BitTorrent Chain.

Further, as a layer-two network that is compatible with both the TRON and Ethereum protocols, BTTC features full compatibility with the Ethereum Virtual Machine (EVM) — all EVM developers are allowed to easily migrate their Ethereum-based applications fully onto BitTorrent Chain, which provides superior scalability for the Ethereum network.

As BTTC arrives, TRON will see the emergence of a closed-loop ecosystem of layer-one and layer-two networks with sound cross-chain connectivity. By integrating both a robust underlying network of Global Human Settlement Layer and a heterogeneous scalable cross-chain network BitTorrent Chain that features high throughput and full compatibility with EVM, TRON will enable smooth communication with the world's top layer-one networks such as Ethereum and BSC.

It is noteworthy that a verifier election of BitTorrent Chain nodes will be held on the TRON blockchain, similar to the one for the TRON protocol. Everyone can take part in the election to become a BTTC node, and BTT holders can cast their votes to earn staking rewards. It is also worth noting that only a limited number of seats are available, and the election will be ended once the limit is reached. Users can earn BTT rewards and co-govern the community once they become the verifiers.

TRON is reported to be one of the top three public chains and one of the largest blockchain-based operating systems in the world. It has been on a fast track to growth since its inception, and now boasts upwards of 58 million users, more than 2.5 billion transactions, and a TVL of over $11.5 billion. Compared with traditional financial transfer networks, TRON's daily settlement volume is already five times higher than that of PayPal.

TRON has also been active in the innovation of nonfungible token’s (NFT's) underlying technology. Besides launching the first NFT standard TRC-721 this March, TRON also enhanced the world's largest distributed storage system BTFS, providing a comprehensive and efficient infrastructure to turn artworks as NFTs on blockchains. Today, TRON's ecosystem is taking off on all fronts.

With the BTTC launch as the prelude, TRON and BitTorrent are officially making inroads into the cross-chain race, ushering in a new era for us all.

The official launch of BitTorrent Chain (BTTC) test network indicates that TRON and BitTorrent are officially making inroads into the cross-chain race, ushering in a new era for us all.