Over the past year, the cryptocurrency market has witnessed the rise of decentralized finance and the launch of countless new tools, services and platforms. In that time, new investors continued to flock to the market to embrace everything it represents. But the market couldn’t have gotten to where it is today without the contributions of one project — TrustSwap.

TrustSwap is a DeFi platform that started out with the simple goal of providing a way for crypto holders to exchange their assets in a trustless way and without a middleman. That idea, which is also the brainchild of TrustSwap’s founder Jeff Kirdeikis, has since grown into a mature platform aimed at increasing the adoption of blockchain technology and making cryptocurrencies more accessible to all.

At TrustSwap’s core is the SWAP token, which was launched on July 9, 2020, to an unprecedented reception that saw its initial DEX offering sell out in under a minute. And now, in 2021, TrustSwap will mark its first anniversary with a party celebrating the launch of its virtual headquarters at Decentraland, with plenty of reasons to celebrate. 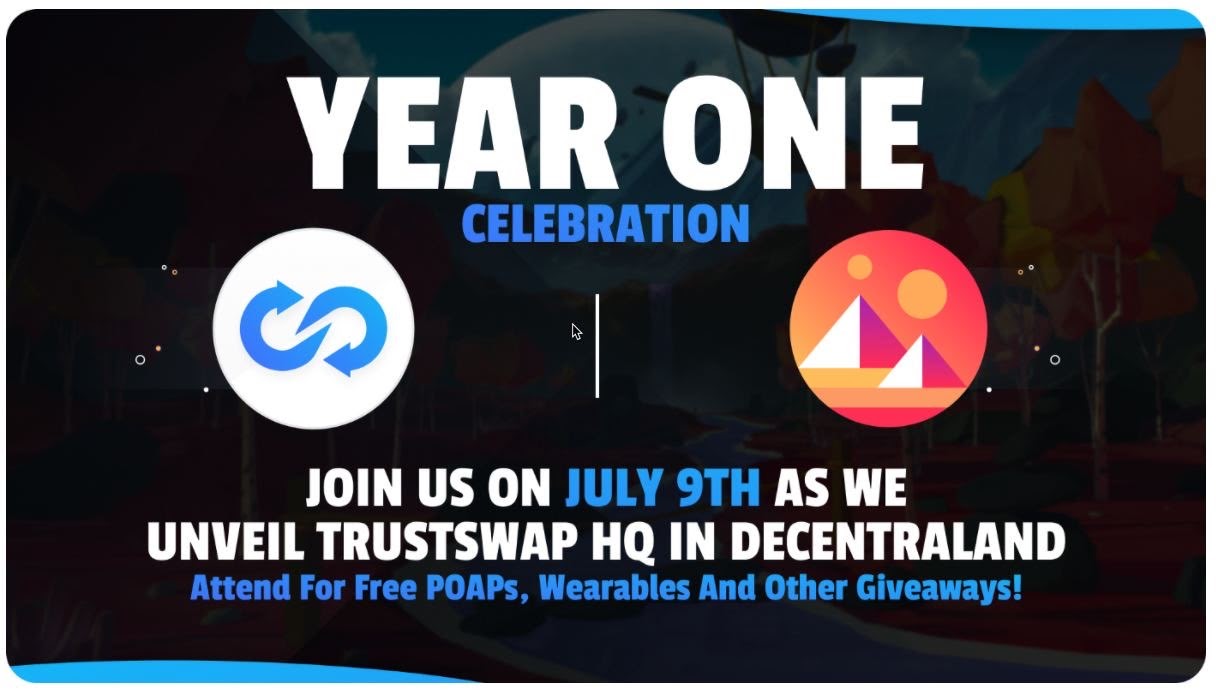 Over the past year, TrustSwap went through a stunning evolution that saw the launch and growth of a suite of industry-leading crypto tools. These included SmartSwaps, SmartLocks, Mint, farming pools, vesting portals and blockchain-based messaging, to name a few.

But it was the innovative TrustSwap Launchpad service that stole the show. It was unique among launchpad services in that it offered guaranteed allocations for eligible stakers and averted gas wars via a 12- to 24-hour application window. This feature would prove critical as gas prices skyrocketed throughout the year.

In just the past year, the TrustSwap Launchpad has facilitated the launch of 24 projects, raising a combined $25 million in the process. Among these were some projects that would go on to notable success, including Tokenplace, Sekuritance, LedgerScore and Yield App. This flurry of activity made it possible for the TrustSwap team to turn its attention back to round out its services, including making further additions to its best-in-class launchpad.

TrustSwap began in late November of 2020 with the acquisition of Team Finance, which united the one-time rivals into a new powerhouse in the smart contract space. Together, they rebranded and relaunched a combined SmartLock service that now accounts for more than $1.5 billion in total value locked. The assets locked in its smart contracts come from all over the crypto ecosystem, with tokens native to ERC-20, Binance Smart Chain and Avalanche included.

TrustSwap subsequently followed that up with an expansion of its launchpad services onto the Avalanche blockchain. The move made it possible for anyone to generate, lock and distribute Avalanche-based tokens with bulletproof security, backed by fully-audited smart contracts.

By early 2021, as the TrustSwap team began fielding a growing number of requests for assistance from other fledgling projects, it moved to launch the TrustSwap Incubator Program. It extended valuable marketing, business development and project management support to help new DeFi projects get off to a running start. The program has already yielded great successes, including the launches of DCTDAO and Verso Finance.

Any other DeFi project may have been content with all of these noteworthy achievements, but not TrustSwap. It continues to innovate as we move further into 2021, and that includes another major acquisition, bringing The Crypto App into the fold. TrustSwap also announced the upcoming launch of Mint, which is an industry-first no code token generator, and TrustSwap's own nonfungible token marketplace known as Swappable.

With so many irons in the fire, it’s a wonder that the TrustSwap team even has time to celebrate its first anniversary. But they’re going to do so in style with a party marking the grand opening of the TrustSwap virtual HQ in Decentraland. Upon opening the HQ, TrustSwap will take its place in the virtual pantheon of crypto alongside Binance, Polygon and CoinGecko.

There’s plenty of benefits for attendees as well. Each attendee will receive a proof-of-attendance NFT badge and a TrustSwap cap NFT that their avatar can wear inside Decentraland. TrustSwap’s top stakers will also get custom NFT hoodies that will let everyone know their importance to the project.

TrustSwap will even be hosting token giveaways involving its SWAP token as well as those from some of its most successful launchpad projects. Each winner will walk away with tokens valued between $500 and $1,000, as a symbol of TrustSwap’s gratitude to its dedicated community of supporters. All participants have to do to be a part of the giveaways is to RSVP for the event, which will take place on July 9 from 3:00 pm to 4:45 pm UTC, and all are welcome. The TrustSwap team is getting ready to put on an event that its supports will be talking about for the rest of the year.

TrustSwap is a DeFi platform built to facilitate a range of crypto transactions and to nurture and facilitate the launch of next-generation innovative DeFi projects. Its management team includes veterans of well-known firms such as CoinMarketCap, Goldman Sachs, and Hewlett Packard. TrustSwap is proud to be the world leader in smart contract services, and one of the leading launchpads growing the ranks of the DeFi ecosystem.