TryHards raises over $3.5M ahead of its promising launch on November 24, 2021

There’s no arguing that play-to-earn (P2E) has taken the world by storm as a new way for players to own their progress in a game, transferring the value from one ecosystem to the next. This paradigm shift takes shape through in-game asset ownership from the belonging of the developer to that of the player, even making it a viable method to make a living. But, P2E on its own means little without an experience that meets the same high standard already expected in the gaming industry.

The blockchain-based game TryHards is one of the earliest adopters of this model and one of the first teams in the industry to bring a blockchain shooter to life. As a shooter, TryHards brings an unmatched quality of gameplay, alongside lore and real opportunities to earn, as supported through the Polygon network, for fast transactions and seamless gameplay. Although the team is passionate about gaming, their real goal is to bring opportunities for playing and farming to as many players as possible, regardless of their status outside the digital ecosystem.

In light of this mission, the team is excited to announce their public token launch on November 24, 2021. The project has already shown potential, exhibiting initial success with the flooding of community interest in the TryHards game as well as its presale being 10x oversubscribed. In addition to their community, the team has received tremendous support through strategic funding with their $3,580,000 raise being backed by Basics Capital and many well-known names including GD10 Ventures, Oddiyana Ventures, Lucid Blue, CaKoin Cap, Brilliance Ventures, Seedify Fund, DuckDao and Kyros.

Gameplay fit for a TryHard

Much like the real world, Satoshi shaped an era never seen before. Where the tables turn is when Satoshi minted the Genesis block and unleashed a wave of crypto chaos, leading to factional warfare and what is known in the TryHards metaverse as the Satoshi Massacre. Now, players are invited to participate in a battle of the survivors in an intensive competition for Planet-X, which can be entered by holding one in-game character and a single weapon, each existing as a nonfungible token, or NFT. A player may get both through an airdrop or through the in-game marketplace. With four different factions and a host of different qualities, each in-game character or “fanatic” will become the starting point from which players may learn to progress their gameplay, harness the old earth’s technology and be victorious in the final fight. 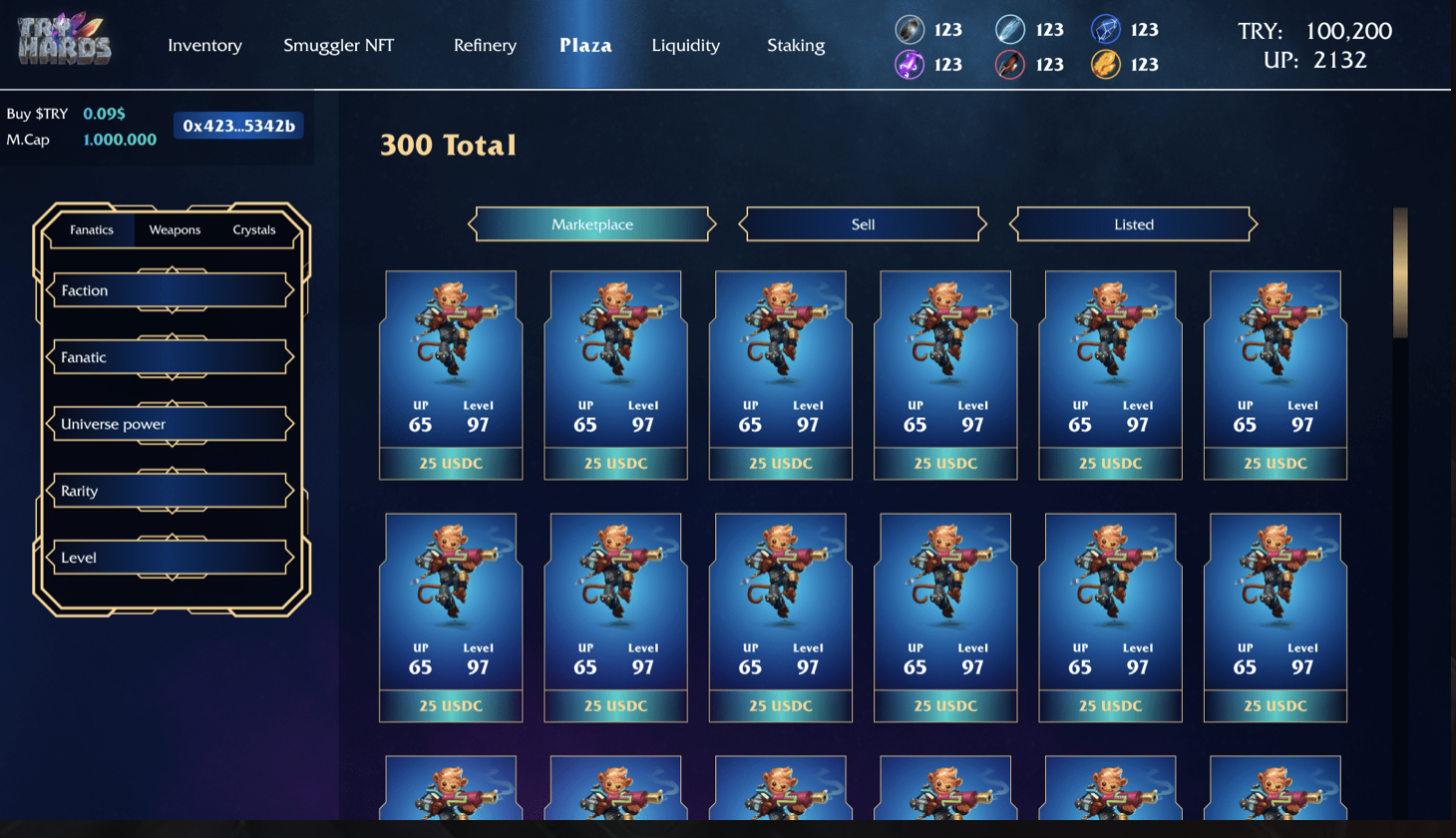 Players must then use the NFT shooter to learn, master and level up their abilities through the Refinery, which is both an ancient marvel and a place for players to boost their weapons to help them achieve world domination. A skill-book will be provided that allows Fanatics to select a path and determine how they wish to play the game, whether it will be putting a member of the ape faction to bat with a sub-machine gun or equipping a member of the undead with a sniper rifle and collectible shield. As players become more experienced and win more fights, the game ensures they will earn total universe power, which determines their staking throughput as an opportunity to earn. The native token TRY can be earned if you enter the NFT metaverse. In the future, there will be opportunities to earn it in the game.

Following the token generation event (TGE), a look at the project’s official roadmap suggests many new releases can be expected into the end of 2021 and the beginning of 2022. Among them is the game beta, the Fanatic and Weapon NFT drop and a series of battle launches, leading into governance and the world map release.

As the story unfolds, players are invited to fight for honor with the hope of conquering Planet X, earn while doing so and enjoy the benefits of an NFT-based game, where all purchases and progress remain permanently ingrained in the digital ledger. Therefore, progress is not lost in the game, it is carried forward with the player.

The TryHards team poses one question to the gaming community: “Will you be able to rule through skill on the blockchain battlefield?”

I, for one, look forward to showcasing my skills and trying hard to earn.