Geneva, Switzerland, June 5 – TRON-based USDD has joined the league of global crypto titans, surpassing several significant milestones in less than one month since its May 5 launch.

USDD has continued to build since its launch, solidifying organic growth, and aspiring to advance the Stablecoin 3.0 era to make finance accessible to all. With a total circulating supply of nearly 700 million, the TRON-based USDD has recently upgraded itself to the first over-collateralized decentralized stablecoin (OCDS), offering faster transactions with the highest collateral ratio around the globe. 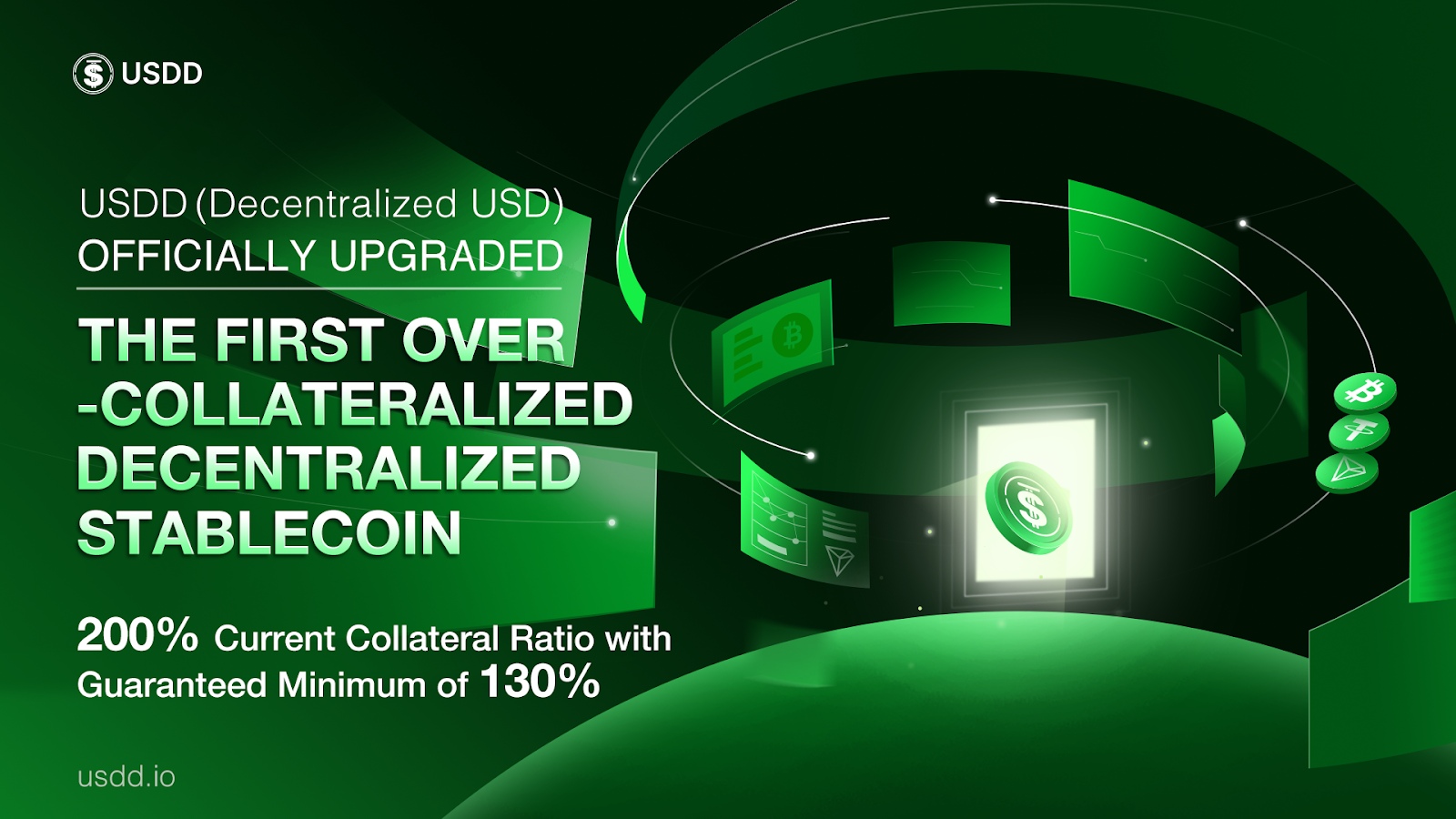 As one of the most secure decentralized stablecoins, USDD enjoys a guaranteed collateral ratio of at least 130%, higher than the 120% set by DAI, which is considered a paragon of the industry. The real-time collateral ratio of USDD is published on the TRON DAO Reserve’s website, publicly available 24/7.

While allowing the TRON DAO Reserve members to continue minting USDD by burning TRX, the upgrade consolidates USDD's stability and credibility by over-collateralizing assets under the TRON DAO Reserve (TDR). These reserve assets would include BTC, TRX, and multiple stablecoins like USDC, USDT, TUSD, and USDJ, at a ratio of 130% to back the issuance of USDD. In other words, every USDD is supported by at least $1.3 worth of BTC, TRX, stablecoins, and potentially other highly liquid assets

The TRON DAO Reserve is currently holding 10,500 BTC, 240 million USDT, and 1.9 billion TRX in the reserve account, on top of the 8.29 billion TRX already in the burning contract. The real-time collateral ratio is now over 200% - a total $1.37 billion of assets backing the 667 million USDD in circulation.

"Spearheading the Stablecoin 3.0 era, the upgraded, over-collateralized USDD will add more diversified features to underpin its stability,” said H.E. Justin Sun, Founder of TRON. “The $10 billion reserves pledged by the TDR will enable USDD to become the most reliable decentralized stablecoin with the highest collateral ratio in blockchain history. Currently, the 200%+ collateral ratio offers USDD a very strong safety net."

To power the over-collateralization of USDD, the TDR has greatly increased its reserves, including the highly liquid BTC, TRX, and USDT, to back USDD's total supply. Users worldwide can access the information by querying on-chain contracts at any time, and the collateral ratio is transparently maintained.

Stablecoins are the faucet of the blockchain industry, and it's critical to ensure their security, transparency, efficiency, affordability, and scale, all of which criteria make USDD a highly desirable option. This upgrade has strengthened USDD, adding an extra layer of security to the token’s stability and risk tolerance in a way similar to how Maker powers DAI.

The DAI token, supported by Maker, is one of the oldest and most resilient stablecoins in the DeFi field. Its success is an excellent example of the decentralization of stablecoins. USDD runs on TRON, one of the largest stablecoin networks. Millions of TRON users, as well as those leveraging the BTTC cross-chain solution, are experiencing the complete decentralization of stablecoins, which in turn shows how blockchain technology practically reaches the masses.

In addition, behind the TRON blockchain, thrives a vibrant community led by the TRON DAO, one of the largest DAOs in the world. As of June 2022, TRON has registered over 96 million user accounts, over $55 billion worth of assets stored on-chain, and an average daily transaction value of $10 billion across the network.

In the near future, the TRON-based USDD will quickly embrace additional ecosystems and major applications. USDD will lead the way into a new era for stablecoins as it grows in supply and user adoption, ushering in the next stage of decentralization across the blockchain industry worldwide.

TRON is dedicated to accelerating the decentralization of the internet via blockchain technology and decentralized applications (dApps). Founded in September 2017 by H.E. Justin Sun, the TRON network has continued to deliver impressive achievements since MainNet launch in May 2018. July 2018 also marked the ecosystem integration of BitTorrent, a pioneer in decentralized Web3 services boasting over 100 million monthly active users. The TRON network has gained incredible traction in recent years. As of June 2022, it has over 96 million total user accounts on the blockchain, more than 3.2 billion total transactions, and over $12.3 billion in total value locked (TVL), as reported on TRONSCAN. In addition, TRON hosts the largest circulating supply of USD Tether stablecoin (USDT) across the globe, overtaking USDT on Ethereum since April 2021. TRON is also currently the third largest blockchain hosting the USD Coin (USDC) created by Circle. The TRON network completed full decentralization in December 2021 and is now a community-governed DAO. Most recently, the over-collateralized decentralized stablecoin USDD was launched on the TRON blockchain, backed by the first-ever crypto reserve for the blockchain industry, the TRON DAO Reserve, marking TRON’s official entry into decentralized stablecoins.