On Nov. 29, 2022, Ethereum Improvement Proposal (EIP) 5489, proposed by Parami Protocol, was assigned as Last Call before becoming an official ERC standard. The upcoming standard extends ERC-721 with a new functionality by allowing hyperlinks to be embedded in nonfungible tokens’ (NFTs) metadata slots, so the audience of NFTs can click through and get directed to any URI destination on the web.

Parami Protocol, besides proposing EIP-5489, seems to ambitiously be building a whole new “attention economy” for Web3. The protocol stack, not only quantifiably monetizes influencers via advertising income but also builds a decentralized exchange, empowering social tokens and liquidity provision.

New application of NFTs and FTs

A vibrant community has emerged around Parami Protocol’s testnet since October 2022. Over 76,000 active users and 10 million ad views have been recorded. A Chrome extension was also built by the community, enabling Twitter influencers to embed hyperlink NFTs onto their profile pictures (PFPs) as a means of receiving passive income. Some influencers also issued governance tokens (named “NFT Powers” in Parami’s ecosystem) of their PFP NFTs. In this way, followers can click through to advertisers’ landing pages and receive token rewards. An influencer’s social influence token (NFT Power) is consequently held by advertisers, followers and the influencer, which leaves imagined room for the future governance of the profitable NFT under a decentralized autonomous organization structure. 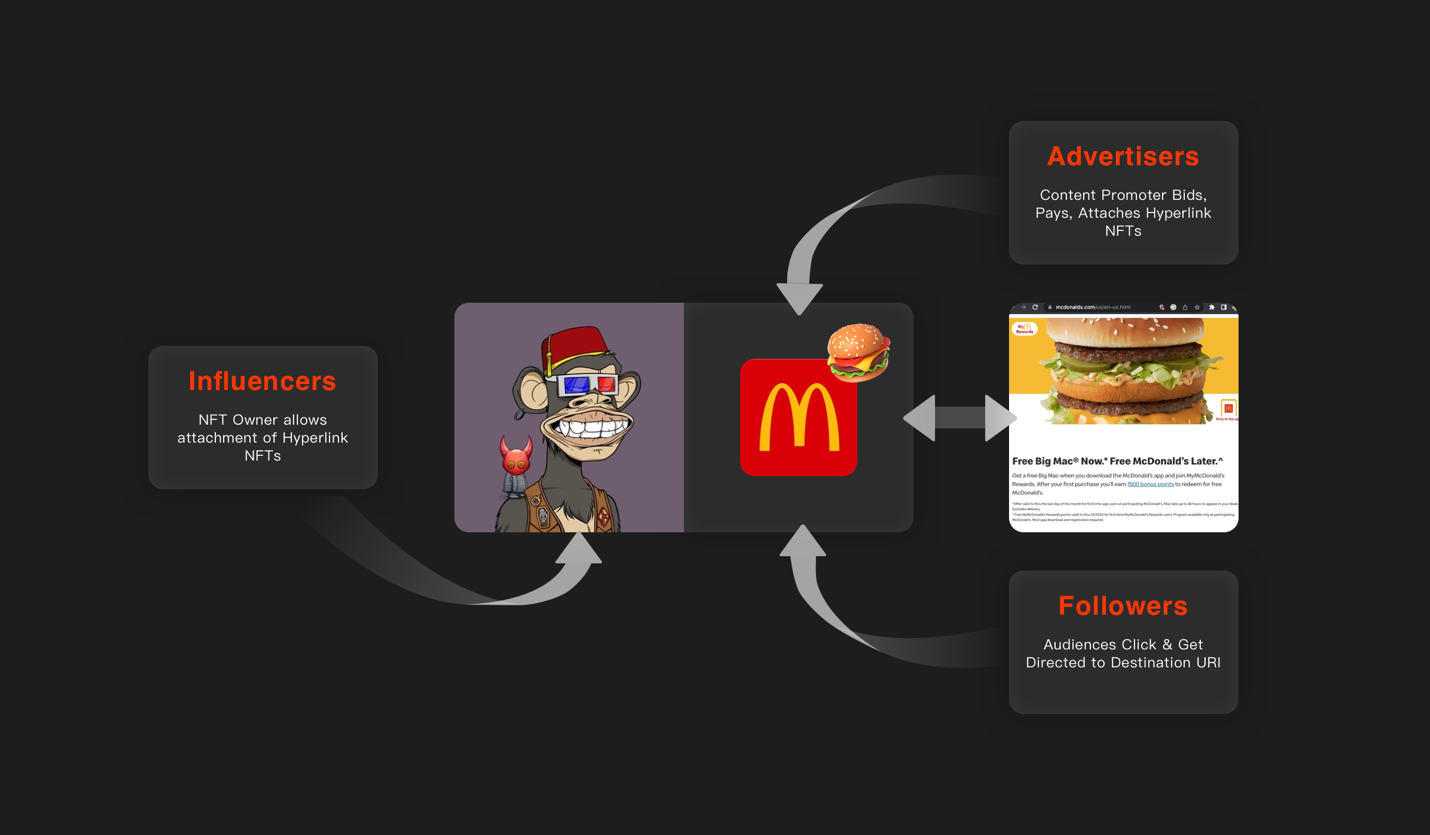 The internet is all about drawing attention — i.e., more attention means more profitability. During the Web2 era, the largest attention generator has been social media platforms such as Facebook, Twitter and YouTube, whose users spend an average of two hours and 49 minutes per day as of 2022. The underlying attention data has been abducted by Big Tech to serve ads with hyper-precision (machine-learning algorithms analyzing attention data to predict user preference, which is sold as tags for advertisers to target). However, the exact influencer-follower relationship and its corresponding social influence have never been quantifiably mirrored and tokenized before. The above two issues can be generalized as (1) data sovereignty — i.e., data ownership must be given back to users, so monetized value of such data can be rewarded to users; and (2) social influence can be quantitatively tokenized and fairly distributed within a social group.

Parami Protocol addresses the above two issues by (1) aggregating users’ personal crypto advertiser preference around their decentralized identity, subsequently generating tags and on-chain reputation for users; and (2) utilizing a profitable NFT and its governance tokens to fairly reward everyone engaged.

The tokenization of the advertiser-influencer-follower dynamic forms a well-rounded and sustainable economic model with no risk of “death spirals.” The influx of revenue comes from advertisers and is distributed to the audience based on rules laid out by Parami Protocol. Unlike “Ponzinomics,” the upstream liquidity provision based on real utilities — i.e., advertisers bidding on ads and paying for ad spaces — powers the growth of token prices and downstream earnings by users.

Parami Protocol does NOT aim to “reinvent the wheel” by building another decentralized Twitter. Rather, the project leverages existing social dynamics to redistribute wealth. Each role in this new attention economy is properly incentivized to enhance participation. 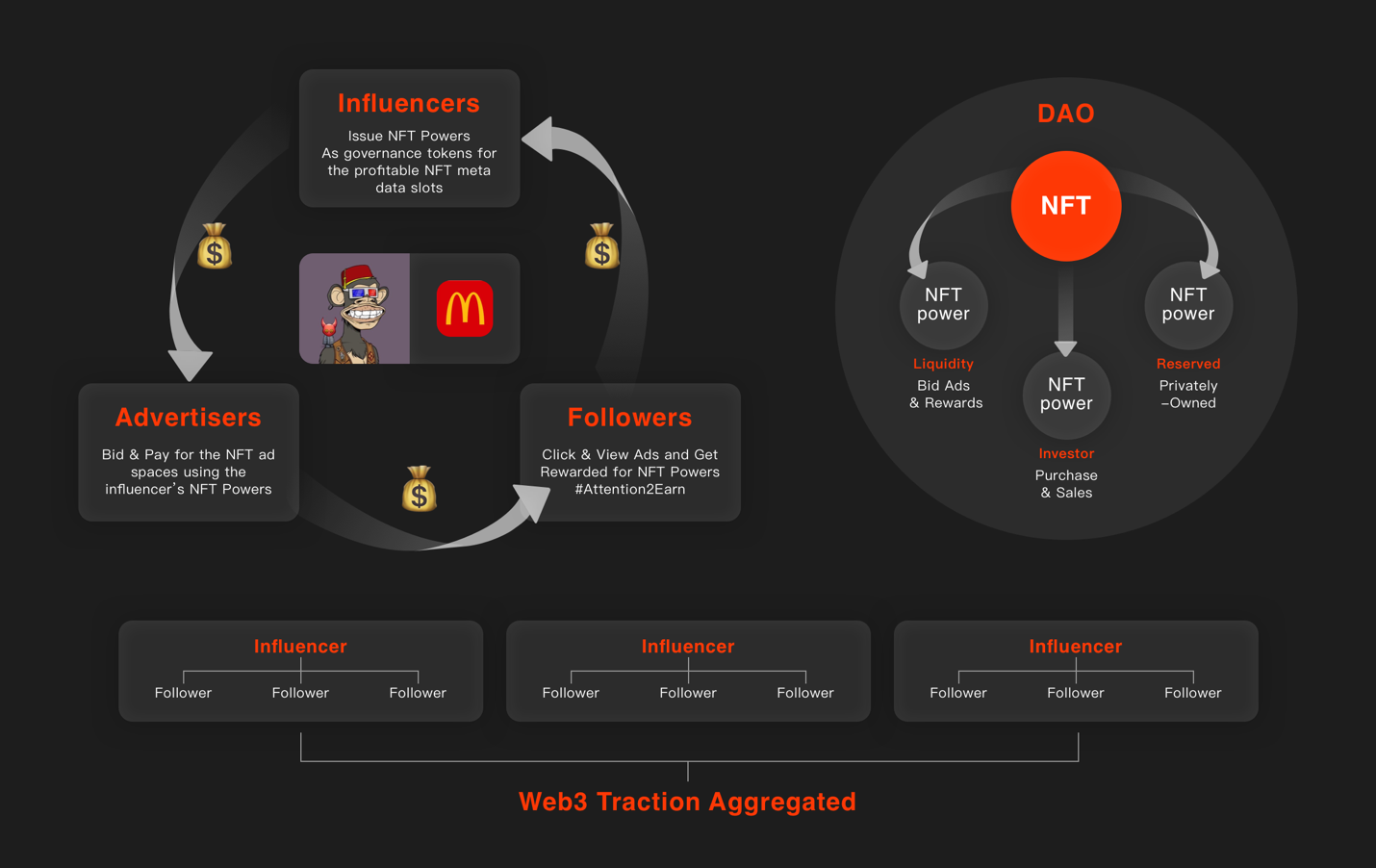 Each social token — i.e., NFT governance tokens — forms a trading pair with Parami Protocol’s utility token, AD3. Each trading pair has a liquidity pool powered by an automatic market maker, which allows users to stake — i.e., providing liquidity to the social group one has faith in. The decentralized exchange creates a healthy mechanism to shake out real social influence with higher token prices.

Instead of betting on killer decentralized applications to be the game-changer, maybe a fat protocol tokenizing the largest traction will create the real mass adoption of Web3. What do you think?