“Life is a chain of DNA – a chain of existance, we are all connected by it. Based on that we have created a digital decentralized blockchain DNA – know as XDNA cryptocurrency.“

In the past year we have seen a great many crypto projects appear and vanish after a month or two, well, XDNA is certainly not one of them. The XDNA project has a very devoted team – they’ve made a significant amount of pre-release work to correct certain legacy code bugs that dozens of Dash and PIVX clones didn’t care to take on, and to implement some really new features into blockchain in general and mining in particular.

The project seeks to combine all the positive aspects of the successful digital currencies and, at the same time, take into account all of their drawbacks and weak points. The team tries to find a balance and meet the requirements of miners and investors, and in the long run – to promote crypto among common people who currently have no idea about the exciting digital reality of our days.

XDNA is a descendant of PIVX and as such has evolved in a much profound way - almost immediately deploying its two main adaptation weapons – BitGun and TNT.

The first innovation from XDNA I’ll review is BitGun:

It was designed in order to shift the “classical” paradigm of mining, when the rewards are inversely proportional to the total network hashrate.

The block reward size of XDNA is dynamic. It depends on the average nethash for the last 24 blocks. The rewards change according to a set of 15 levels, related to the Fibonacci numeric series.

What benefits does this feature present? If one compares the situation in XDNA with the common block reward calculation procedure, BitGun allows the miners to get stable rewards while the network grows. The individual reward decreases much less rapidly with the growing nethash than in systems with the traditional distribution.

Here is a sample table of BitGun application:

The second innovation, though it’s not really obvious, is a real revolution in the world of masternodes and it’s called T.N.T.

T.N.T. stands for Triple Node Technology, and is the first multi-output system since DASH has introduced the concept of masternodes.

It alters the way masternodes work in several ways and it works in pair with BitGun.

At first, the XDNA team extended the coinbase outputs. There are 3 types of masternodes and each has its own output for improved blockchain stability and performance. Though this approach seems reasonable and simple, it is currently unique among crypto coins.

Each type of the masternodes requires a different amount of collateral XDNA and gives the owner a different income.

During the POW period, the masternodes will receive the following rewards: 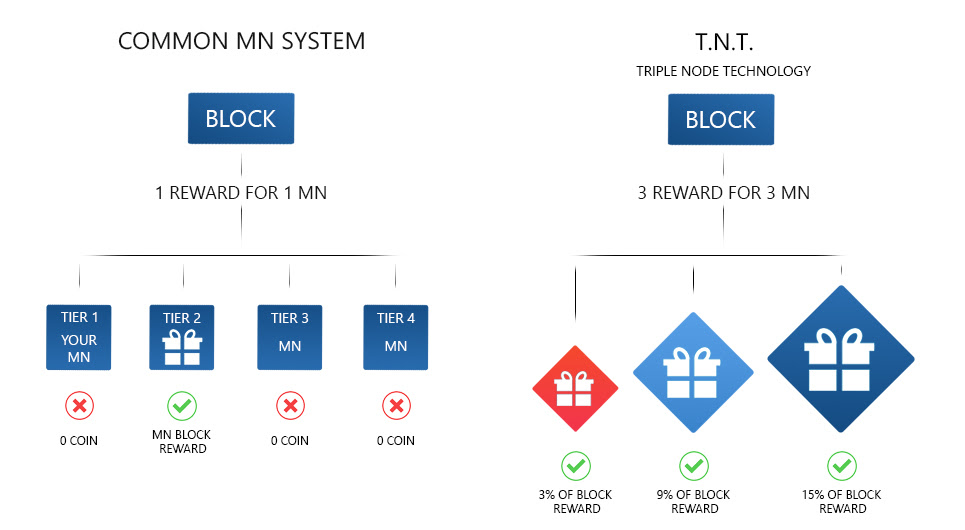 Tiered masternode systems have become quite common. It is not obvious though, that only a single masternode of ALL masternodes in the network gets a reward for a certain block. In XDNA’s TNT, each block THREE masternodes from EACH tier get their rewards. This feature will provide adequate income to both large-scale and small investors. 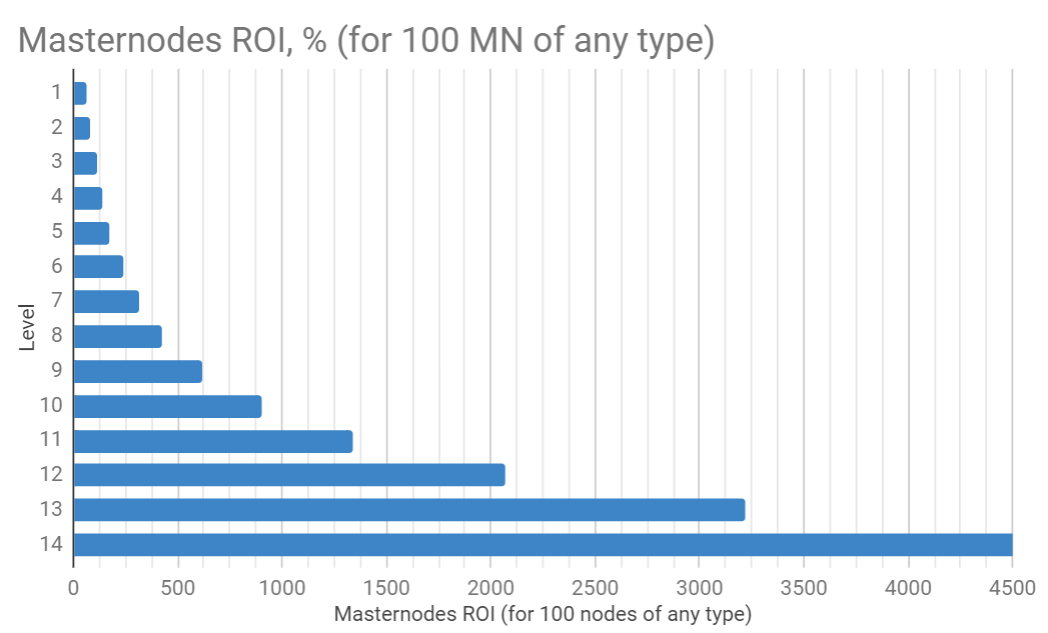 The latest innovation from the team is a brand new hashing algorithm – HEX – currently the most advanced ASIC and FPGA resistant algorithm on the market.

The HEX algorithm has certain advantages in comparison to the majority of the existing hasing algorithms:

In addition, it looks like the core team is really big and already has more than 15 members. An important fact is that it is also a decentralized and global team from different regions of the world. They prepared a really thorough whitepaper without copypasting from other projects or making a rubbish out of crypto terms on 5-10 pages like a host of emerging coins do nowadays.

All their technical innovations and vision reviewed here are very detailed - you can discoverr it yourself in more than 10 languages here - whitepaper.

A good signal for me was that XDNA has a real-life purpose before it – the creation of a non-commercial charity platform - XDNA foundation. As far as I could have researched this way – at this moment it is under development and should be done this year already. They have made a transparent process of it and provided some screenshots of the alpha version – 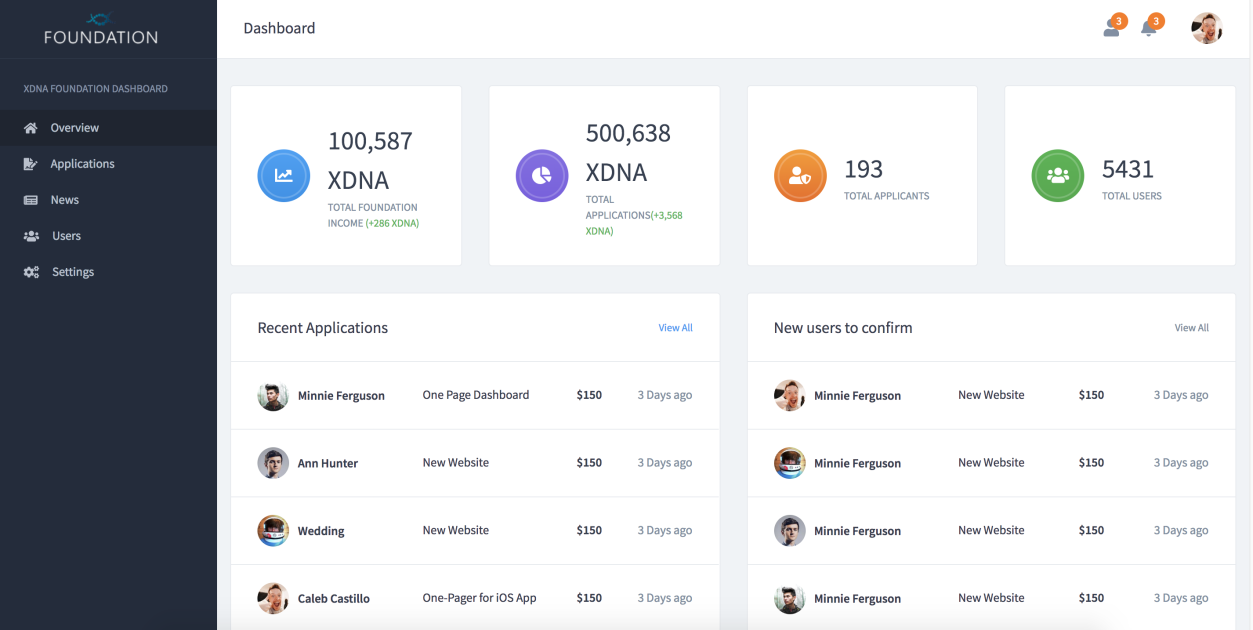 And the main strong thing of this project and something that I haven't seen before (maybe there was something distantly similar in ADA) is a very detailed road map. From a quick view it looked pretty empty, but then I realized that it had 5 sections for each development direction.

They make updates with the percentage of jobs done for each task and you can see it live here - Roadmap.

Right now crypto mining is going through very tough times and it is really hard to survive and grow on such a market for a PoW coin. Yet I have a very optimistic view towards this project, because so far it is the most innovative PoW coin in 2018 and I think if the team keeps kicking, it could make it to TOP 10 PoW coins and stay in one line with such respectable projects as ETH/ZEC/XMR and other well-known altcoins.

This coin is trading so far on - Cryptopia.

So one thing is for sure – XDNA is here to innovate and improve the world of crypto in the way that it works for the benefit of everybody.