After more than half a year of intense collaboration between SYG and MetaMUI, the team successfully issued a fully functioning central bank digital currency (CBDC) using the revolutionary technology of MetaMUI, the world’s first identity-based blockchain. 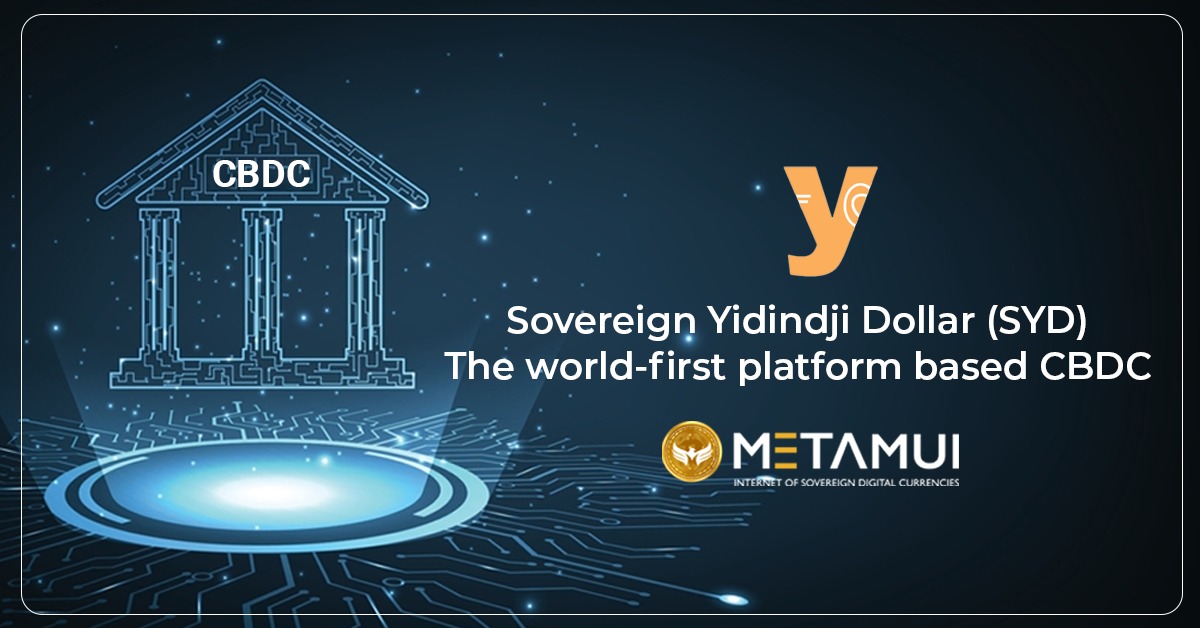 While hundreds of CBDC projects are cropping up around the world, most projects are still in the research or proof-of-concept stages. Only a few entities so far have launched CBDCs, such as the Sand Dollar in the Bahamas and the eNaira in Nigeria. The Yidindji Dollar has four distinctive features that differentiate it from others:

MetaMUI is the first identity-based token blockchain that combines the concept of a self-sovereign identity and a decentralized blockchain. Self-sovereign identity is a decentralized identity that protects users’ privacy. It avoids the problem of centralized censorship and the abuse of private information. The Sovereign Yidindji Government has already built the national identity system utilizing MetaMUI’s technology. Therefore, all Yidindji citizens, companies and organizations can create their own digital identity, own various digital assets and make payments with the Yidindji Dollar.

“Yidindji is the first nation to choose MetaMUI’s CBDC platform. The MetaMUI platform allows any country to publish the state-of-the-art CBDC within a few days at a fraction of the cost. MetaMUI also provides a single integrated solution for national identity, e-government, peer-to-peer payment, digital certificates and cross-border payments,” said Phantom Seokgu Yun, CEO of MetaMUI.

"The benefits of central bank digital currencies are profound, and it is only a matter of time before they are implemented by countries around the world," said Don Tapscott, Executive Chairman of the Blockchain Research Institute. "But they need to be done right to safeguard citizen privacy and to interoperate around the world. I am delighted to see this technology used to build a more sustainable future for the people of the Sovereign Yidindji Government in Australia."

Loretta Joseph, an advisor at MetaMUI, said, “I am very excited for the oldest civilization to adapt to the 21st century by embracing technology and change for a more inclusive and better world.”

The Sovereign Yidindji Government is an Aboriginal Australian micronation, and its territory is home to some of the world’s most pristine rainforests. Academics and scientists claim the Yidindji people have existed for more than 60,000 years, making them one of the oldest living cultures on the planet.

“With the blessing of Yeshua Hamashiach, the Yidindji nation is becoming a fully digitized nation, thanks to MetaMUI revolutionary technology we made a leapfrog towards the future. The Yidindji reserve currency will stabilise and add more security, it will also ensure credibility to the global economy and financial system. Yidindji's participation not only makes sense being logical, but it is also inevitable. The world is now ready for the indigenous peoples to underwrite a new future,” said Gudju-Gudju Gimuybara, chief minister of SYG.

MetaMUI is the first identity-based token blockchain. The design approach of MetaMUI is opposite to most cryptocurrencies and other anonymous token blockchains. In contrast, most token technologies follow the anonymous token design of cryptocurrencies such as Bitcoin (BTC), Ether (ETH), XRP and more, but MetaMUI chose to redesign the blockchain structure based on identity entirely. The main reason for this is to satisfy the regulatory framework of current financial systems such as the Financial Action Task Force’s Travel Rule, which requires financial institutions and crypto companies to collect personal data on participants in transactions exceeding $1,000.

Sovereign Wallet Network (SWN) is the genius behind the development of the MetaMUI identity-based blockchain. SWN has redesigned the blockchain and developed the MetaMUI blockchain. We are proud to provide a state-of-the-art fourth-generation blockchain with a mainnet launched on Jan. 3, 2021. SWN is located in six different countries, with headquarters in Singapore and offices in South Korea, Sweden, the U.S., India and Uzbekistan. The MetaMUI blockchain is paving the way toward building the internet of sovereign digital currencies. The company’s website contains additional information.

The Yidindji people are a rainforest-based society with several clan groups in the area as far north as Queensland on the Australian continent. The Yidindji territory is home to some of the world’s most pristine rainforests and is an essential gateway to the Great Barrier Reef. Academics and scientists claim the Yidindji people have existed for more than 60,000 years, making them one of the oldest living cultures on the planet. On Sept. 20, 2014, history was made as the official government of the Yidindji nation launched its coat of arms. Since then, the SYG has created several departments and its parliament continues to pass laws for the peace, order and good governance of the Yidindji territory. SYG has 17 ministers and 22 ministries and plans to be the first government to become entirely digitized in its venture toward e-governance.