The zkTube Labs Scaling Solution Release Conference at the World Forum of Ethereum Scaling and Upgrading 2021 will be organized by the global alliance and co-hosted by the global official community of zkTube Labs and Hot Chain Culture Media. It will be officially launched at W Hotel on the Bund in Shanghai on July 19 and will be broadcast live worldwide.

Core members of the zkTube team and key industry players will be at the event together with thousands of blockchain scaling developers. The conference will provide an in-depth analysis of the ecology and the market of Ethereum with a fresh outlook on the technical discussion among many blockchain technology developers and enthusiasts. 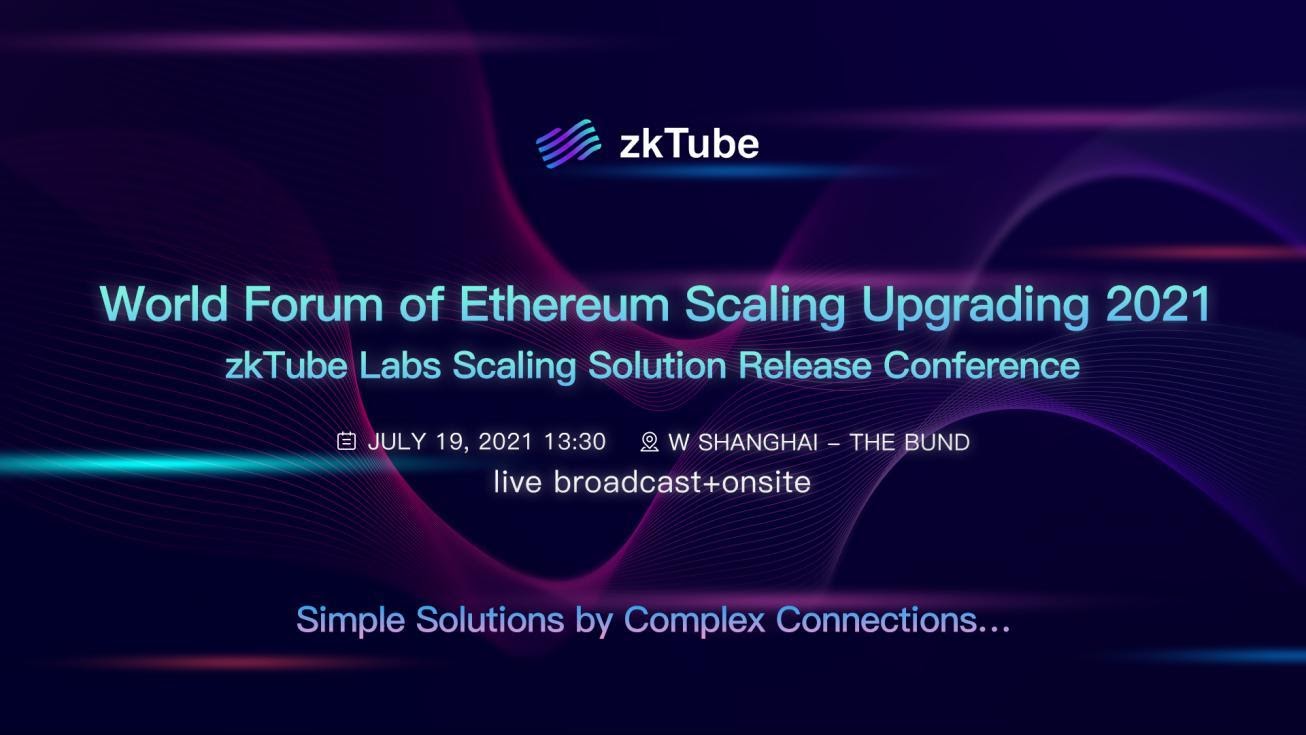 Without sharding and with Ethereum 2.0, the current Ethereum performance is heading toward maximum capacity. Additionally, the various liquidity mining of decentralized finance, decentralized exchange, gaming, the launch of other applications, and even the boom of stablecoins overwhelmed Ethereum. The current Ethereum is inefficient and cannot support the agility, smoothness and low cost of its eco-applications.

During the 2020 Ethereum Technology and Application Conference in China, Vitalik Buterin, the founder of Ethereum, addressed Ethereum developers, saying, “If you are building applications, you must also be facing problems in scalability. Every transaction consumes gas and the price of Ether (ETH) has been high. Therefore, if you are looking for ways to optimize your applications, a rollup scaling solution is highly recommended.”

One of the many solutions that emerged to solve the “impossible triangle problem” of blockchain technology is the layer-two network.

The team at zkTube Labs aims to improve the Ethereum system, which is currently used as a secure base layer to massively reduce data processing on the blockchain, by running computations off-chain. Ultimately, its goal is to break through the existing performance limitations to host a larger ecosystem.

In the upcoming conference, the zkTube Labs team plans to unveil the zkTube Protocol — an extended network built on layer one known as layer two. Layer two does not require any changes to layer one as it is simply built on top of the existing components of layer one. The layer-two solution, which comprises the zkTube Protocol, can also enjoy the security of layer one by anchoring its state to it, and could significantly increase the number of transactions. Depending on the solution, it can achieve 2,000 to 4,000 transactions per second. On the other hand, the zkTube research and development team will have a joint discussion on future technologies for cross-rollup scaling solutions to communicate with each party of layer-two projects and discuss the trends involved in layer-two scaling and cross-rollup technology solutions with everyone.

The release of PayTube Wallet

Another big surprise is the first official release of the PayTube Wallet, which is a Web 3.0 application on the zkTube network. Users can access any Ethereum decentralized application through a one-click link to the wallet. After the connection is established, users can do a series of operations on PayTube. Version 1.0 of PayTube will provide the basic PC and mobile terminal functions for users such as deposit, withdrawal, transfer, buy and sell, among others. It will also become the “entry” for various DApp applications to access zkTube.

Highlights of the conference

The highlight of the conference is the official launch of the zkTube Protocol which will see many blockchain enthusiasts from around the world coming together at the Bund, Shanghai. Additionally, there will be exciting guests invited to discuss the cross-rollup proposal and the cross-rollup technology solution. Layer-two technology developers will also conduct interactive Q&A and presentation sessions on-site to discuss layer-two scaling solutions and market trends with everyone.

This conference is supported and promoted by the media globally.

The W Hotel on the Bund in Shanghai will be the center of technology innovation in the East and a new chapter of blockchain networking will be opened for participants to embrace contemporary technological innovation. Top layer-two digital intelligence will be revealed at the zkTube Labs Scaling Solution Release Conference during the World Forum of Ethereum Scaling and Upgrading 2021.

Sign up here to participate in Ethereum’s annual event in Shanghai.