Founder and CEO of Kraken 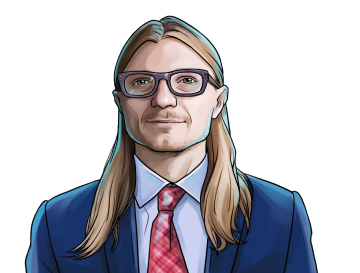 “You could conceivably do a group insurance deal among the exchanges, like a co-operative kind of thing. But then you have to have your competitors audit everything and I think everybody’s too smart for that — and too paranoid.“

A graduate of California State University-Sacramento, Jesse Powell has been operating in the digital currency space since 2001, when he founded Lewt — a platform that provided various account management services for MMORPG such as power-leveling and in-game currencies. In 2011, he founded Kraken, one of the first cryptocurrency exchanges. Powell is known for refusing a probe from the New York Attorney General and rejecting the state’s BitLicense framework for cryptocurrency business operating in the state. Kraken has since moved operations westward to San Francisco, California.

In February, Kraken acquired U.K.-based cryptocurrency exchange and futures provider Crypto Facilities in an undisclosed “nine-figure deal.” The acquisition significantly strengthened Kraken’s presence in the European market. In April, a former trading desk manager sued Kraken for failure to pay his commission for profits in 2017. This sparked a deeper insinuation that the exchange had been illegally operating in New York since it removed operations from the state due to its stringent BitLicense regulation.

In May, Kraken conducted a $13 million sale to democratize access to the firm’s equity, granting clients the opportunity to become investors in the exchange. An August report revealed that the exchange’s volume had increased twentyfold since 2018. At the close of the year, Kraken announced it had purchased Circle’s OTC trading desk after the firm decided to shift its focus on the development of the USDC stablecoin ecosystem.

The goal for any high-profile exchange in the industry is to expand its services internally and abroad, so we imagine Kraken will announce additions to its myriad services as well as new partnerships throughout the year. Just at the start of 2020, the firm announced the acquisition of Australian-based exchange, Bit Trade, providing the exchange a key foothold in the country.