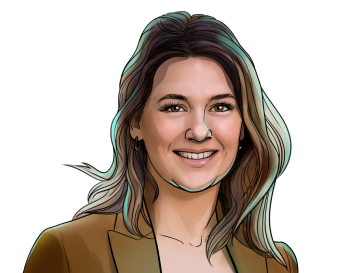 “I think Bitcoin is digital gold. It’s the digital analog to gold.“

Active in the crypto space since 2015, Meltem Demirors has served as vice president of the Digital Currency Group, is a member of the blockchain council for the World Economic Forum and is an advisor to the MIT Media Lab. As chief strategy officer for CoinShares, she plays a meaningful role in pioneering professional crypto investment vehicles. Demirors also hosts a weekly podcast, “What Grinds My Gears,” covering developments in the crypto asset space with recurring guest Jill Carlson. She also hosts the annual Crypto Springs conference in Palm Springs.

One of the highlights of Demirors' 2019 was her testifying before the U.S. House Committee on Financial Services during its probe of Facebook’s controversial cryptocurrency project, Libra, in which she was asked by Rep. Warren Davidson to explain the distinction between Bitcoin and so-called “shitcoins.” In her response, she advocated for Bitcoin over alternative options due to its track record of being secure and resilient over the past decade.

In October, Demirors voiced her criticism of the notion that the influx of institutional investor interest from Wall Street and traditional financial markets is necessarily good for Bitcoin, citing that trading what are basically digital receipts of Bitcoin held in a vault somewhere is far from the vision of a P2P electronic cash system. At the close of the year, she cast doubt on the upcoming halving of the Bitcoin block rewards in May being a significant driver of the price, stating that the advent of Bitcoin derivatives in the burgeoning futures and options markets could actually lessen the impact of miner activity on the price.

We expect Demirors will continue guiding institutional investors' foray into the crypto asset markets through her work at CoinShares while also providing commentary through public channels and her weekly podcast.