What is Binance Coin (BNB) and how does it work? 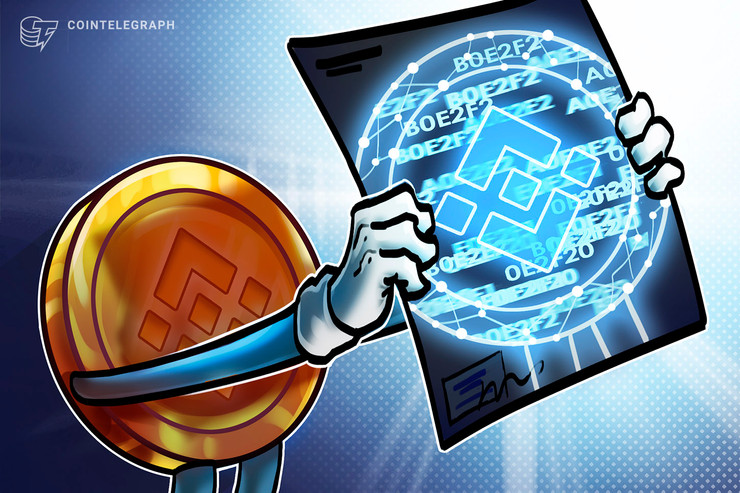 The cryptocurrency and blockchain industry includes numerous projects and assets aimed at different goals. It is not uncommon to see projects aimed at solving similar needs.

Several crypto exchanges exist, for example. Although each exchange may vary in construction and features, they aim to give crypto traders a place to swap their assets in a broader sense. Sometimes, a cryptocurrency exchange may have its own asset that is used for certain purposes on its related exchange such as fee discounts on the trading platform.

Binance Coin (BNB) of the Binance exchange is one such crypto exchange asset. What is a Binance Coin? BNB began as an asset sold in Binance’s initial coin offering (ICO), becoming a way Binance exchange users could pay less trading fees on the platform once the exchange launched.

Since then, BNB has retained a role in Binance’s growing ecosystem as Binance has expanded into more than a digital asset exchange.

Telling the story of Binance Coin’s beginnings would prove difficult without talking about the history of the Binance exchange. Binance Coin was launched in July 2017 with an initial coin offering (ICO). BNB tokens were dispersed among various participants including angel investors and the Binance founding team as part of the ICO.

Here's a quick rundown of how BNB tokens were distributed at first:

During the ICO, all 100 million BNB tokens available for public sale were sold for 15 cents each. Binance raised a total of $15 million in Bitcoin (BTC) and Ethereum (ETH) from this ICO.

From the $15 million raised, 35% was utilized to upgrade the Binance platform and exchange system, 50% was used for Binance branding, marketing and education of new innovators and the remaining 15% was set aside as a reserve in case of any emergencies or unusual circumstances.

During its ICO and early days, BNB was an ERC-20 token built on the Ethereum blockchain. Binance opened its crypto exchange platform a matter of days after the conclusion of its mid-2017 ICO.

Binance launched its own native blockchain in 2019 calling it Binance Chain (BC). With BC came the blockchain’s own native BNB coin. Users received the new BNB coin in exchange for their BNB ERC-20 tokens via a token swap in 2019.

How does Binance Coin work?

BNB is a crypto asset similar to other digital assets on the market in that it rises and falls in value as people use and trade it. People can hold BNB in compatible wallets off crypto exchanges and send the coin directly to others for payments or otherwise.

One might also wonder how to buy Binance Coin? People can buy BNB via a number of avenues such as Binance’s own crypto exchange, for example. As always, though, be sure to research and abide by any applicable jurisdictional laws.

On a more technical level, BNB works in tandem with two specific blockchains — Binance Chain and Binance Smart Chain (BSC). BSC is a separate blockchain built in addition to Binance Chain, running parallel to BC and carrying different features such as smart contract capability.

When constructing BC, Binance tailored the blockchain for optimal performance when it came to trading on-chain, basing Binance DEX, Binance’s decentralized exchange (DEX), on BC. However, BC is limited in terms of the blockchain’s potential for developers to build solutions on it. BEP-2 tokens are assets constructed on the Binance Chain.

Adding further capabilities to its ecosystem, Binance went on to launch Binance Smart Chain in 2020, giving developers more functionality when building their blockchain projects on BSC versus BC. BEP-20 tokens are assets made on Binance Smart Chain.

BSC hosts smart contract functionality, for example, while BC does not. Binance Smart Chain is a separate blockchain from Binance Chain, but both chains operate parallel to each other. BSC is also able to work with the Ethereum Virtual Machine (EVM).

Interacting with either blockchain (BSC or BC) requires payment for network fees in BNB.

Binance spends some of its revenues each quarter to purchase back and burn Binance Coins, totally eliminating them. Binance has continuously performed quarterly burns since 2017.

Binance will continue burning BNB coins every quarter until it has purchased and destroyed 100 million Binance coins, or half of its original maximum supply. The process decreases Binance Coin's supply and affects its rarity, which can potentially affect the asset’s value.

Binance also has something called the BNB Pioneer Burn Program, which evaluates certain instances in which BNB holders unrecoverably lost BNB, and repays them, deducting the amount from the next BNB burn. 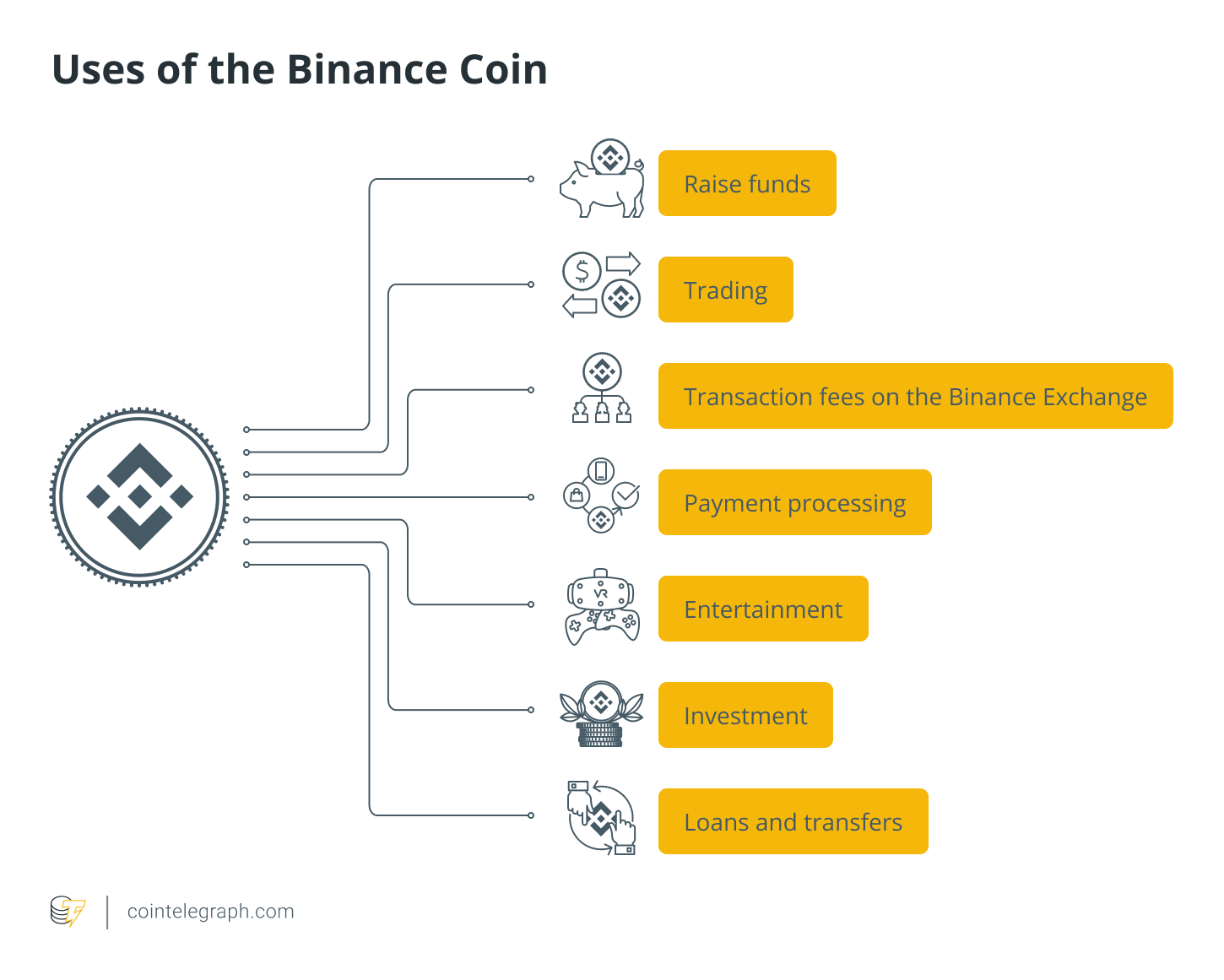 What is Binance Coin used for?

Binance Coin’s usage comes in line with Binance’s growth. The asset initially started out as a vehicle to raise funds for the Binance exchange. Binance quickly gained significant traction as a cryptocurrency exchange following its 2017 launch. Binance grew from an exchange platform to more of an ecosystem under the Binance brand umbrella.

Over the years, Binance has launched a DEX, two blockchains, a peer-to-peer (P2P) crypto trading option, an option for crypto borrowing and more. BNB has grown in line with Binance’s expansion.

Users can use BNB coins to pay for transactions on the Binance Exchange. The BNB coin has historically served as a method of fee reduction on the Binance crypto exchange, with customers of the exchange paying lower fees by holding BNB and paying platform fees in BNB. Binance will extend the option of receiving a 25% reduction on trading fees when paying using BNB until July 13, 2022, at 11:59:59 pm UTC. In addition, BNB has also become a component of other Binance products.

Additionally, merchants can accept BNB as a form of payment, giving customers more options in terms of payment methods. Furthermore, BNB is used for various things in the entertainment industry, from paying for virtual gifts to purchasing lottery tickets.

Binance Coin may be used to invest in stocks, exchange-traded funds (ETFs), and other assets on a variety of platforms. On some platforms, BNB can be used as collateral for loans. Some apps allow users to use Binance Coin to split expenses and pay friends and relatives.

In general, BNB’s price has historically fluctuated in a fashion similar to other crypto assets trading on the market. Binance Coin’s market cap has grown over the years, surpassing a valuation of $70 billion. During Binance’s ICO, BNB sold for about $0.10 per token.

Since Binance’s ICO, BNB has traded its way up in value significantly, fetching a price tag of more than $600 per coin at times. Is Binance Coin a good investment? Its historical price rise likely yielded profit if buyers entered and sold at the right times. Although going forward, only the future will reveal where BNB’s price will head.

After Binance began operations in 2017, it grew into one of the largest players in the crypto space. However, regulatory difficulties notably surfaced against Binance in 2021. Binance faced regulatory action from a number of regions in 2021 including the Cayman Islands, Japan, Malta, Netherlands, Malaysia, the United Kingdom and Thailand.

The United Kingdom Financial Conduct Authority, for example, ordered Binance to cease all U.K. regulated operations. in June 2021 because it lacked the necessary authorization, registration, or license. Similarly, Malaysian authorities responded by filing a criminal complaint against Binance for operating as an unauthorized virtual asset service provider (VASP) the following month.

Is Binance banned in the United States? Prior to its 2021 headwinds, Binance announced the removal of United States customers from its main exchange in 2019, although Binance opened a platform compatible with U.S. users in the same year, called Binance.US.

In response to increased regulatory scrutiny, Binance has stated that it intends to open additional offices throughout the world and seek licenses in each jurisdiction where it operates. Binance is also beefing up its compliance capabilities and resources, as well as phasing out or restricting a number of high-risk items.