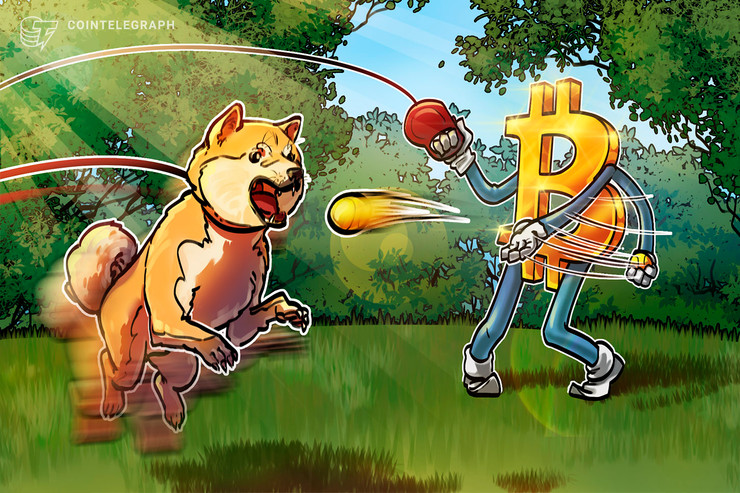 What’s the difference between BTC and DOGE?

Satoshi Nakamoto rocked the financial world when they introduced the Bitcoin (BTC) whitepaper in 2009. Bitcoin’s whitepaper detailed it as a decentralized digital currency that gained quite a following, with many hoping Bitcoin would replace the world’s current financial systems. Bitcoin was, and still is, a big deal in finance ⁠— so much so that world legislators are struggling to regulate Bitcoin.

Despite Bitcoin’s financial shakeup, some saw Bitcoin’s technology, the blockchain, and wanted to harness it for less dramatic reasons. Thanks to the Bitcoin blockchain being entirely open-source, building upon the idea was simple in theory.

This article will detail the Dogecoin vs Bitcoin debate.

A brief history of Bitcoin and Dogecoin

Palmer based Dogecoin on the popular ‘Doge’ Shiba Inu meme, combining it with a cryptocurrency. Palmer then tweeted about his idea somewhat as a joke, but Markus saw the tweet and reached out to build Dogecoin.

Before Palmer even responded, Markus built Dogecoin in three hours by forking Lucky Coin, which is a fork of Bitcoin in its own right. Essentially, Markus created Dogecoin by copying core chunks of Bitcoin, Litecoin, and Lucky Coin’s source code and changing it up a bit, before setting the project live.

At the time of Dogecoin’s launch, Palmer and Markus expected their meme project to fall off after a short period. Instead, DOGE grew quite the community thanks to the Reddit social media platform. The Dogecoin subreddit was full of fans sending DOGE back and forth, sharing information on DOGE and bringing others into the DOGE community.

Eventually, Tesla’s founder Elon Musk got involved. Musk tweeted frequently about DOGE in early 2021, claiming he would send the asset to the moon. Musk’s tweet caused the DOGE price to skyrocket as investors flocked to get involved. It also generated a flurry of memes surrounding DOGE which garnered the asset even more attention.

Compared to Bitcoin, DOGE is still seen as more of a meme by many in the crypto community. That said, the mainstream public has continuous exposure to DOGE as popular exchanges like Coinbase and Robinhood support the asset.

An increase in accessibility means traditional investors might be more likely to put money into DOGE. The increased popularity of DOGE has led to developers working on a scalability and security update set for release by early 2022.

Similarities between Bitcoin and Dogecoin

Considering that DOGE was initially a joke copy of Bitcoin, and utilized a fair amount of Bitcoin’s source code, the two cryptocurrencies have quite a bit in common — so much so that a BTC vs. DOGE comparison isn’t unfathomable.

For one, both Bitcoin and Dogecoin have a proof-of-work (PoW) consensus method involving miners. In a proof-of-work blockchain, transactions are stored in blocks. Once a block is full, a group of dedicated users called miners set out to validate that block.

Block validation involves miners dedicating powerful hardware to find a unique, 64-digit hexadecimal code for each block. Once the hexadecimal code is found, the transactions within that block are considered valid, and the block is committed to the blockchain. Miners are rewarded in a network’s cryptocurrency for their efforts, which also releases more of an asset into circulation. On both the Bitcoin and Dogecoin networks, miners can do their work alone or by joining together via a mining pool.

Otherwise, Bitcoin and Dogecoin can be used to store and transact value. Businesses and corporations around the world might accept one or even both assets as a form of payment for goods and services. But the similarities between Dogecoin and Bitcoin tend to end there. Even though Dogecoin was created as a meme, Markus and Palmer implemented various changes that differentiate Dogecoin and Bitcoin more than they might initially appear. 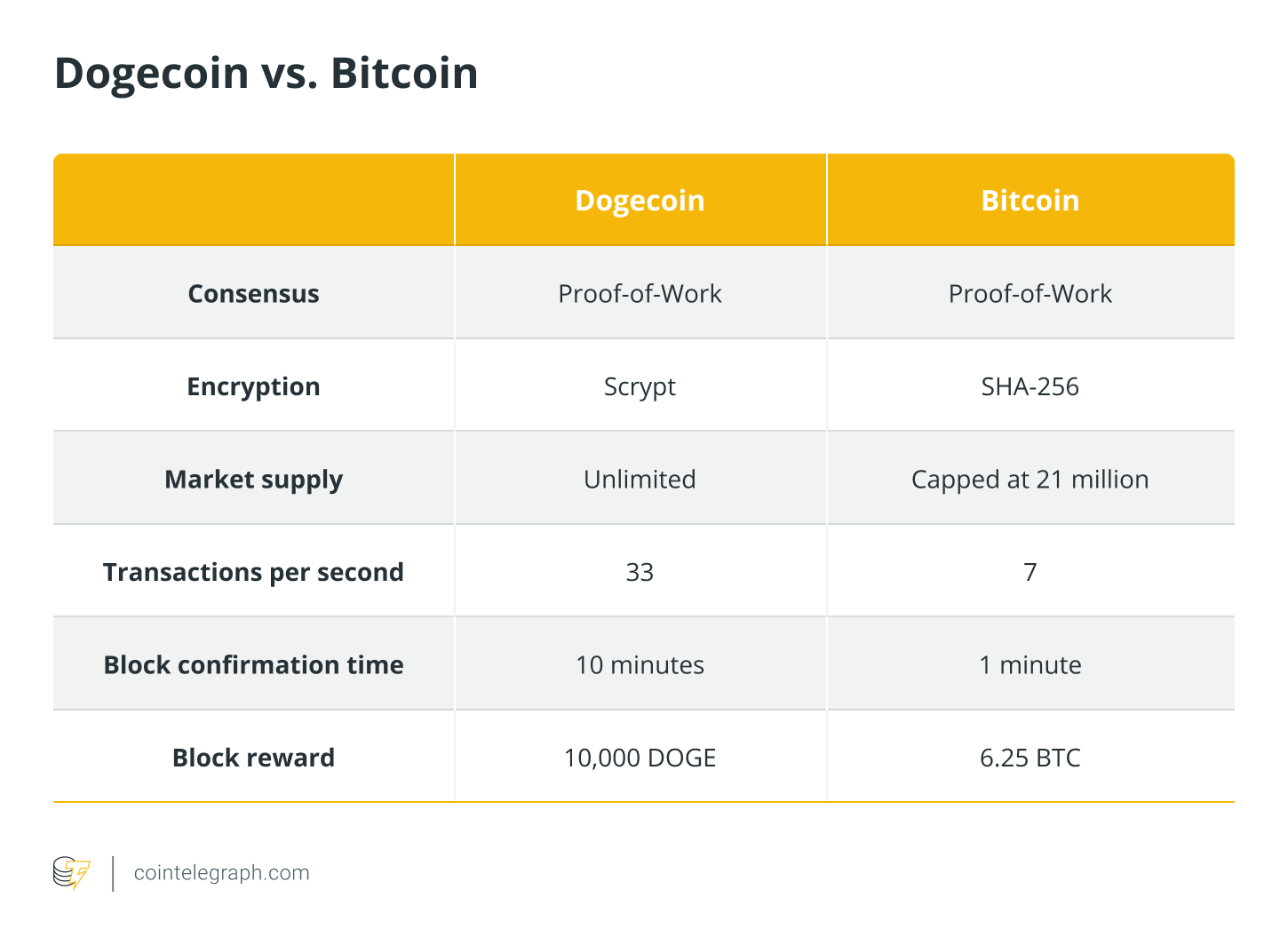 BTC vs DOGE comparison: Where Dogecoin improves upon Bitcoin

For example, Bitcoin’s proof-of-work consensus method is built on top of the SHA-256 hash standard. The SHA-256 standard was established by the United States National Security Agency (NSA) in 2001 and is commonly considered a state-of-the-art encryption method.

Dogecoin, on the other hand, utilizes the Scrypt hash standard popularized by Litecoin. Scrypt ensures that mining a cryptocurrency is more accessible than on an SHA-256 network. On a proof-of-work blockchain network, only the first miner to find a block hash earns a reward.

Because only one miner can earn the reward, users with less powerful hardware earn much less than corporations and individuals with thousands of dollars in hardware. Even then, there are specific graphics cards made for PoW mining called an Application-Specific Integrated Circuit (ASIC). Miners with ASICs are more likely to earn a reward than traditional miners, gatekeeping newer miners even more.

The Scrypt standard, however, is ASIC resistant. Blockchain networks with Scrypt were implemented to ensure traditional mining hardware works well, making the mining process more accessible due to the lack of ASIC support. Also, miners on the Dogecoin network are called ‘diggers’ as a joke.

If Bitcoin becomes more scarce over time; it should hypothetically rise in value as it becomes less available. Dogecoin’s lack of a supply capitalization alongside its 5 billion a year issuance ensures the asset will never become too valuable, which is exactly what Palmer and Markus wanted upon Dogecoin’s creation. Dogecoin was meant to be a joke, after all.

All of this isn’t to mention the fact that Dogecoin is much faster than Bitcoin when it comes to transactions per second (TPS). Dogecoin features a block confirmation time of just one minute, compared to Bitcoin’s ten minutes per block. The Dogecoin confirmation times lead to processing around 33 transactions per second, which is much faster than Bitcoin’s average of 7 TPS.

Dogecoin’s price is also relatively much less volatile than Bitcoin’s price. Bitcoin is known to swing thousands of dollars in value per day. Similarly, Dogecoin is also fairly volatile, the asset’s price ranges mostly below a dollar. Dogecoin’s relative stability makes it a more suitable candidate for daily transactions than Bitcoin.

Despite the advantages Dogecoin has over Bitcoin, the Shiba Inu-themed cryptocurrency isn’t perfect. Technologically speaking, Bitcoin still has some key advantages over Dogecoin.

For one, Bitcoin’s value is significantly higher than Dogecoin. Bitcoin’s all-time high is more than $64,000. The highest price Dogecoin has ever hit is around $0.70. While the price disparity between Bitcoin and Dogecoin could be considered both good and bad for different reasons, there’s no denying that tens of thousands of people invest in Bitcoin due to its reliability as a long-term store of value.

Bitcoin is also facing significant upgrades that could make Dogecoin irrelevant. Most notable of Bitcoin’s upcoming upgrades is the Lightning Network, which enables users to make smaller transactions with Bitcoin, such as a cup of coffee, by utilizing off-chain tunnels.

Lightning Network tunnels are opened between two users, who can transact instantly with minimal fees. Once the two parties are finished transacting, they can close the tunnel, which is then sent to the main Bitcoin network. While Dogecoin might have higher transaction speeds, for now, Lightning Network could render Dogecoin nearly useless in the long run.

In terms of the public eye, Bitcoin isn’t even close to the level of meme that Dogecoin is. Due to Dogecoin’s meme background, institutional investors are much less likely to invest significant funds into Dogecoin. Instead, high-value investors are sure to lean toward Bitcoin, a cryptocurrency that has been earning its existence since its inception.

Every time a Dogecoin block is mined, the miner receives 10,000 DOGE. Mathematically, it means 10,000 Dogecoin is released into the network every minute, consistently devaluing the asset over time. Dogecoin’s consistent devaluation is exactly what Markus and Palmer wanted. The two Dogecoin developers created unlimited amounts of Dogecoin, meaning it shouldn’t be valuable due to a lack of scarcity. Bitcoin, on the other hand, is inflation-resistant. Bitcoin’s hard capitalization of 21 million tokens paired with its ever-lowering rate of release should mean a constant increase in Bitcoin’s value, similar to gold. Scarcity and demand tend to result in high long-term value.

Bitcoin vs Dogecoin: Which one is right for you?

Considering that both Bitcoin and Dogecoin have their pros and cons, there’s no definitive answer for which is best. However, there is certainly an answer for whether Bitcoin or Dogecoin is right for you.

It’s important to understand that despite their price differences, both Bitcoin and Dogecoin have yielded impressive returns for their investors at different times. In 2021 alone, Dogecoin ranged from less than $0.001 to around $0.68, providing early investors with quite the profit. That said, note that the Dogecoin price jump was due to word of mouth from Elon Musk. Dogecoin’s price did not jump due to any technological developments, which is standard in blockchain. It’s difficult to say if lightning can strike twice in Dogecoin’s particular case.

Of course, the Dogecoin network is consistently pumping in new coins which devalues the asset over time. To many investors, devaluation could mark a potential downside in Dogecoin’s future. Bitcoin, on the other hand, is designed to increase in value over time thanks to its scarcity. Whether or not Bitcoin’s value will continue to rise is based on demand, but there’s no denying the asset’s potential.

Palmer and Markus designed Dogecoin as a meme, remember? There’s little in terms of a long-term philosophy coded into the Dogecoin network, especially considering diggers’ constant pumping out of more DOGE. However, despite Markus and Palmer’s intent, the community has taken over the Dogecoin project. With scalability and security upgrades in Dogecoin’s future, the community can validate the existence of DOGE.

Overall, based on the price history of either project, Dogecoin appears to be more of a short-term investment for many, while Bitcoin is a long-term investment. Certainly, there are people that view Bitcoin as an alternative cash and Dogecoin as a store of value and have even profited off of that mantra in both cases. Historically, the numbers point toward Dogecoin having been a short-term investment, and Bitcoin a long-term one. However, the situation for both networks can always flip based on future news and developments.