3% of Overstock Profits will be used to promote Bitcoin

Patrick Byrne, CEO of Overstock: within the next two decades people will soon forget that we had used anything other than Bitcoin. 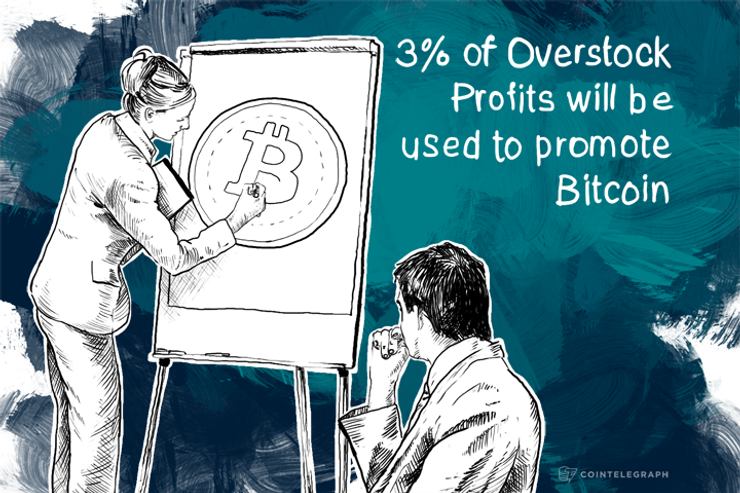 If you were to ask 100 people in the United States to explain what Bitcoin is, maybe ten would be able to answer, likely with ten different answers. Bitcoin has been around for about five years and is a very different economic system than most people are used too.

But if you listen to Patrick Byrne, CEO of Overstock, within the next two decades people will soon forget that we had used anything other than Bitcoin.

Byrne seems to be more than willing to put his money where his faith is, however. Under his direction, Overstock began accepting Bitcoin as payment early this year and, much to most people's surprise, profits widely exceeded all forecasts by surpassing over 1.6 million USD worth of sales in Bitcoin as of May and attracting a slew of new customers.

But Overstock has plans to go far beyond mere acceptance of Bitcoin. They believe so solidly in a future with cryptocurrency that Byrne announced at the Bitcoin in the Beltway last Saturday that the company would be donating 3% of its Bitcoin generated profits to organizations that actively promote cryptocurrencies around the world.

Overstock was the first major company to accept Bitcoin and is planning to pay bonuses to their employees with Bitcoin as well. Several other large companies (e.g. DISH Network and Expedia) have also recently announced plans to start accepting cryptocurrencies with their motive appearing to be strictly profit-driven.

Overstock, however, appears to have a slightly different strategy than these other companies by not only accepting it for payment but also by promoting Bitcoin usage and mainstream adoption.

Speaking at the Beltway conference this past weekend, Patrick Byrne responded to an attendee who asked if altcoins will be a major competitor to Bitcoin by saying that while other cryptocurrencies will be around for a while there is little likelihood, at least for the time being, that any altcoins will be able to dominate the market. Byrne added that this would only happen if the altcoin offered a superior technical feature although this can be done by forking Bitcoin. However, he did concede that Bitcoin contains a lot of “slop,” which may cause some issues in the future.