To address concerns around the simplicity of play-to-earn games, a GameFi metaverse aims to create interoperability with editable NFTs.

12512 Total views
18 Total shares
Listen to article
0:00
Sponsored
Own this piece of history

With the current interest in nonfungible tokens (NFTs), many companies have started to develop NFT marketplaces to attract as many users as possible. The problem with that is because everything happens so quickly in the NFT space, user interfaces and processes at these platforms are confusing and complex for users, which pushes away a lot of people from the entire experience.

Currently, NFTs are designed to never be changed, limiting their abilities as digital assets. However, a solution may be underway. The DeHorizon Foundation has recently announced a new partnership with NFT interoperability Middleware, POD, to jointly launch the First ever Interoperable, Editable and Evolvable ERC-721 NFT "DeMeta Pass ID (DeMeta).  DeMeta will allow users to have the ability to develop exclusive NFTs or reorganize other NFTs so that they can be minted into a new one. With the ability to customize their own NFTs, users will be more involved in developing the metaverse, placing them in a better position to embark on a journey to Web 3.0.

The metaverse is said to be the natural transition after Web 2.0, as players look for new opportunities to interact online. A migration period is a direct result of people spending an increasing amount of time playing video games online, setting the expectations that where they go, new aspects of society, the economy and the world as we know it will follow. As a result, games have evolved to include more complex gameplay, and more realistic scenarios, even allowing players to earn money in exchange for their gameplay, a model known as "play-to-earn."

Before GameFi (Game+DeFi）are commonly adopted in the marketplace today, concerns around static NFTs and interoperability must be addressed, as both are crucial to the creation of the metaverse. Failure to do so will limit future development opportunities for players and lock in-game assets in a single ecosystem, limiting their utility.

The DeHorizon Foundation aims to solve this by acting as the bridge between great artists, independent developers and award-winning celebrities, to position the platform as an interactive and decentralized metaverse game ecosystem. As the metaverse concept has continued to soar in popularity, users have likely witnessed many firsts, including a virtual concert in Fortnight and a CryptoKitty NFT. Although NFTs are increasing in usage, there has yet to be a solution for a mainstream NFT interoperability standard, in part what is holding back today’s games from being able to truly capture their audience.

DeHorizon is also developing their first-ever blockchain-based game DeVerse, built on the Ethereum (ETH) platform. In DeVerse, the metaverse's financial system will play a crucial part in creating a sustainable play-to-earn economy. As the game continues to make strides forward, the DeHorizon metaverse will cooperate with other games to harvest NFTs and tokens in the future.

Building an MMORPG game is believed to provide users with an opportunity to "play for fun and to earn" rather than just "play to earn." The result is that players can participate in a gaming experience on the DeHorizon Metaverse that will one day become widely recognized and applied by more chain ecosystems. By doing so, the platform will be able to successfully lay the foundation for the digital civilization of the metaverse.

NFT: From static to editable

Taking a closer look at the DeMeta NFT, users will find that it comprises six attributes that can be replaced. Additionally, it will include a 256-byte character profile that the player can customize. Within DeHorizon, every detail is an NFT with rarity, each of the six replaceable attributes is randomly generated, and replaceable characteristics are eligible to trade in the future. 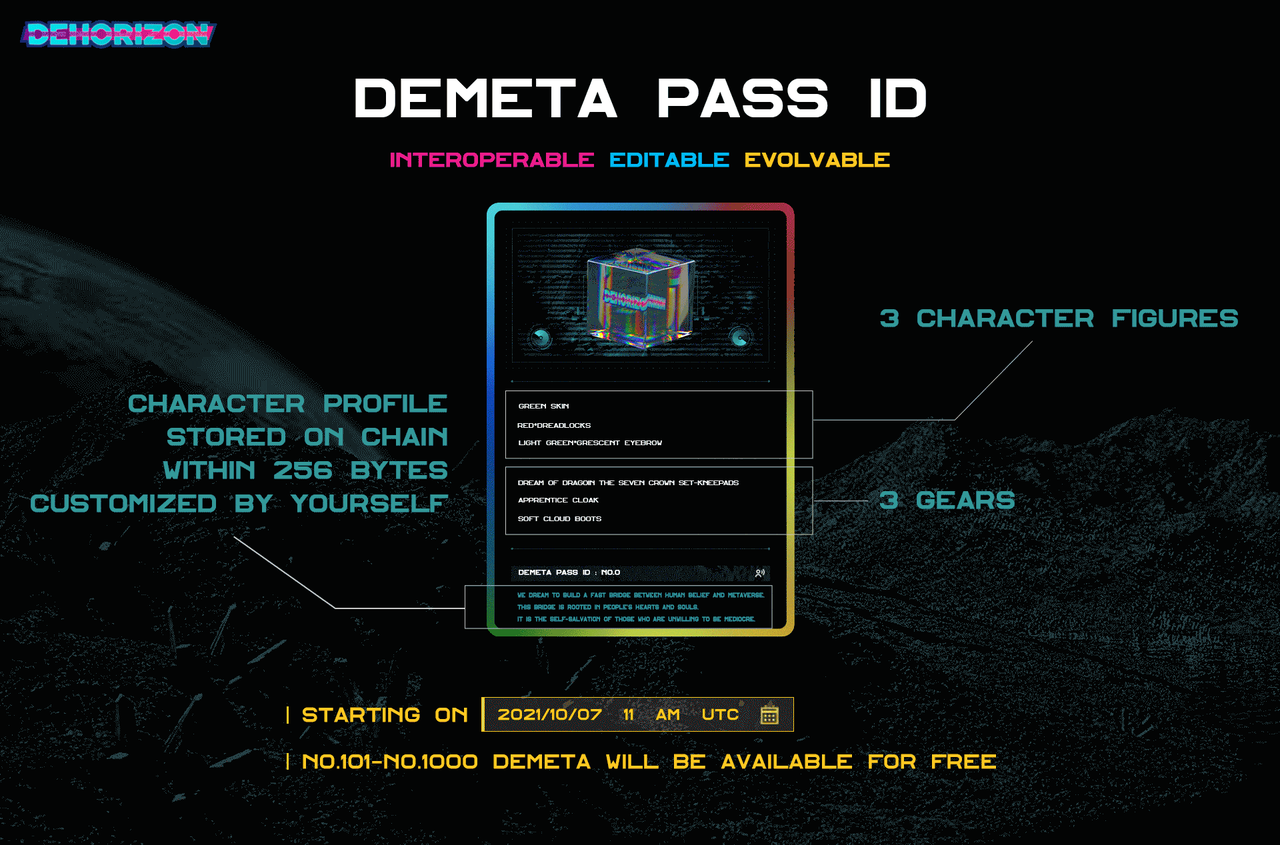 The second key component in the development of the metaverse is interoperability. Users must have the ability to take a character or other assets in the metaverse for gameplay on a separate blockchain with this capability.

Shane Zhu, the founding director at DeHorizon Foundation, shares, "Prometheus stole the fire from Apollo, but there was no payer. POD is one of those payers. As an intermediate platform, POD decouples the upstream and downstream applications in the NFT market, laying the foundation for more torch relays."

The comparison to Greek mythology helps illustrate the beginning of civilization by introducing new characters, definitions, connections and classifications. Like the beginning stage of a new metaverse, everything is chaotic, and order must be cultivated.

Recently, DeHorizon just announced their $8.5M Pre-A Round, led by Sfermion, Dragonfly Capital and Everest Ventures Group. The new funding is said to help them to accelerate DeVerse’s development and grow their team better.

Meanwhile, DeHorizon’s global community is steadily scaling up. “We are in the early stages of the evolution of GameFi. For the next stage, a Metaverse Game Ecosystem is essential to make GameFi go further. That is why DeHorizon comes,” the team shares.