Multi-billion dollar companies are more likely to use blockchain for traceability than for payments, according to a new analysis.

3748 Total views
169 Total shares
Listen to article
0:00
News
Own this piece of history

Multi-billion dollar companies are more likely to use blockchain for traceability and provenance than for payments and settlement, according to a new analysis of the Forbes Blockchain 50.

The now annual Blockchain 50 list was published in late February and includes fifty of the biggest brands in the world who are using blockchain, each with annual revenue in excess of $1 billion in annual revenue.

Research from Dutch firm Blockdata, which incorporated its own data in the analysis, found that fifteen have solutions that tackle traceability and provenance, while 13 are using blockchain for payments and settlements.

Companies with blockchain traceability solutions include IBM, Nestle, Foxconn, Honeywell, Walmart, Amazon, BMW and Mastercard. Ten of the products are already in production, while five are pilot schemes. Use cases are spread across agriculture, mining, aerospace, food and automotive industries.

The Linux Foundation’s Hyperledger technology was the most widely used for traceability, followed by Ethereum — however, a number of companies use multiple blockchains or distributed ledgers.

Blockdata’s analysis cited iPhone and Playstation contract manufacturer Foxconn's use of blockchain technology as a notable example. It is streamlining financing via its Chained Finance platform for its suppliers, many of whom are small to medium enterprises. It also highlight's IBM's contributions:

"IBM, backers of the Hyperledger blockchain project and its many platforms, makes an appearance because of the Food Trust initiative. This program allows companies to quickly and accurately ascertain the provenance of individual goods in its supply chain. Notable participants include Walmart, Nestlé, and Dole Foods."

However, as Forbes transportation contributor Steve Banker cautioned in his recent report about Food Trust, just because blockchain is now being used widely in traceability does not  necessarily mean it will be a success. He wrote:

"Once the retailer starts to generate data they will have to see how increased costs surrounding Food Trust are balanced by lower costs in recalls; how much prices for produce will need to increase; whether those price costs can be passed along, and similar cost/benefit trade off questions. In short, the viability of Blockchain for traceability is not assured yet, despite the mandate." 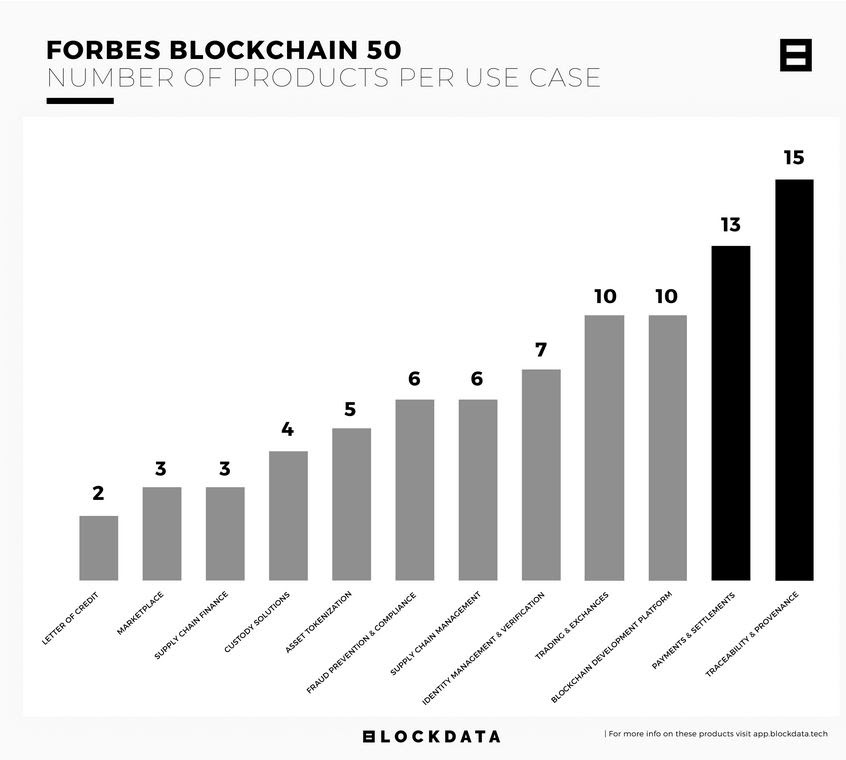 The next most popular category among multi-billion dollar companies on the list was Payments and Settlements, which accounted for 13 products, followed by blockchain development (10), trading and exchanges (10), identity (7), supply chain management (6), fraud prevention (6), asset tokenization (5), custody solutions (4), supply chain finance (3), marketplace (3) and letters of credit (2).

Facebook, Credit Suisse, JPMorgan, Bakkt, Ripple and Square were highlighted in the payments category. Hyperledger and Ripplenet were used by two projects each in this category, while Ethereum was used by three.

Outside of traditional finance services, Blockdata highlighted Daimler's Truck-ID and Truck Wallet products, which aim to allow vehicles to autonomously transact with other machines.

Blockdata concluded its analysis by suggesting the number of products in each category would change over time:

"It’s clear from the products being built and put into use that the world’s largest firms are using blockchain technology to address real problems. Areas like digital identity and asset tokenization, while less popular in this list, will see massive growth over the next few years as companies figure out how to digitize physical assets. Don’t be surprised if your car starts scheduling its own maintenance (and paying for it from its own wallet), or being able to invest in fractional ownership of real estate projects as easily as you can trade stocks."