Circle Opens To Everyone: An Unholy Marriage Of Banking And Crypto

One of the biggest selling points of Cryptocurrencies like Bitcoin is that they allow you to become your own bank. 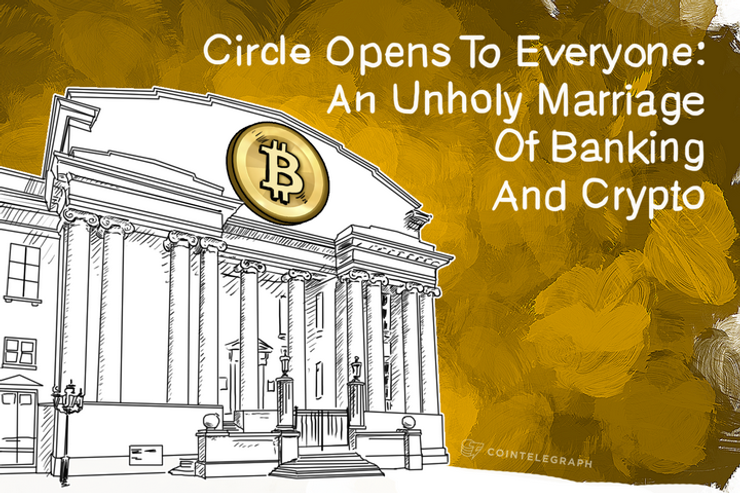 One of the biggest selling points of Cryptocurrencies like Bitcoin is that they allow you to become your own bank. A major appeal is leaving behind those financial institutions that have betrayed our trust repeatedly for as long as they have existed.

So, it may come to some surprise that Circle is launching with significant fanfare while bringing bank-like features to a Bitcoin web wallet. Today, Circle is moving out of Beta and is now open to the public.

But, before you get out your torches and pitchforks, consider what this Frankenstein service offers to users and the community as a whole.

Bitcoin is difficult. Not only is finding an “on-ramp” to the system a fairly involved process, securing your bitcoins is beyond the technical capabilities of most users.

Even with services that make printing paper wallets easy, the process of bringing them on and offline is too convoluted to be a viable way to store and access monetary value. Paper wallets are the digital equivalent of burying money in your backyard, most web wallets are the equivalent to handing someone your cash to “look after it for you” and desktop wallets, the supposed middle ground, are still at risk of theft due to malware.

Circle is still the digital equivalent of handing someone your money to look after it for you, but like a bank, they bring services and guarantees that go a long way to building consumer confidence and trust. Most significantly, insurance.

Likewise, a series of high profile hacks at exchanges make handing over your money to someone else just as frightening. Insurance gives customers peace of mind that even if Circle fails at securing their bitcoins, their wealth will be protected.

Currently, Circle is available to users worldwide and will denominate their bitcoin balance in a variety of different currencies. However, at the press time, only U.S. bank accounts can be used to fund a Circle account. Transferring bitcoins in from another service will put them under Circle's insurance plan.

In addition to the insurance, Circle adds a very “Coinbase-like” experience to its web-wallet, enables sending bitcoin by email and uses a new BTC address for every transaction in order to increase anonymity.

Circle is available online now, with Android and iOS apps promised in the near future. Some minor issues with Google Authenticator for two factor authentication have been reported (and experienced by this reporter) as well as slow loading due to a heavy traffic load, but those issues are expected to be resolved soon.

Related News
Top Staking Projects of the Crypto World Today: Report
Major Digital Asset Platform in Asia Unveils Exchange for Pro Traders
Rising Wedge Breakdown Threatens $7K Bitcoin Price Target
No Tax for You: Why Crypto Traders and Miners Might Head to Portugal
Bitcoin Wallets Holding at Least 1 BTC Set to Hit 800K All-Time Highs
Bitcoin Price Rejects $6.9K, But Is a Correction Now Imminent?
<div is="sidebar" :sidebar-data="{"promoButtonsI18n":{"crypto-button":{"url":"crypto.btn.sidebar.url","label":"Get Crypto At True Cost\n","text":"Cryptoassets are complex instruments and investments carry a high risk of losing value. You should educate yourself in how crypto-markets work before making any investments. Always invest responsibly and be prepared for the risks associated with investing in or using cryptoassets. This promotion cannot be considered investment advice."},"etoro-button":{"url":"etoro.btn.sidebar.url","label":"Join eToro","text":"Crypto assets are a high-risk investment. You should consider whether you understand the possibility of losing money due to leverage. None of the material should be considered as investment advice."},"hitbtc-button":{"url":"https:\/\/hitbtc.com\/?ref_id=5cba0be404aa3","label":"BEST LIQUIDITY ON HITBTC","text":"Note that all trading strategies are to be used at your own risk. Before trading, we recommend to make sure that you have a clear understanding of cryptocurrencies and how they are traded."},"changelly-button":{"url":"https:\/\/changelly.com?utm_source=cointelegraph&utm_medium=referral&utm_campaign=changellyctengbutton&ref_id=le9ssi8dgmskmqu0","label":"BEST RATES ON CHANGELLY","text":"This is to note that you should realize all crypto trading risks. Please make sure that you understand how crypto exchange service works."},"nexo-button":{"url":"https:\/\/nexo.io\/?utm_source=cointelegraph&utm_medium=fixed&utm_term=content&utm_content=crypto_banking_account&utm_campaign=nexoeverywhere","label":"CRYPT