CryptoFriends had another successful meetup in Barcelona. Event involved networking and preparations for next Hypethon.

*Daria Arefieva (Cryptodaria) is one of the important figures of Russian crypto community. She is a partner at Eberhald Lindfort, an ICO consulting firm, and the CEO/Founder of CryptoFriends, a company that organises major blockchain events.

“Shoot for the moon and dreams will come true.” Those words echoed in my brain 30,000 feet in the air on my return flight to Moscow following another CryptoFriends Netup (*Netup - kind of meetup with “deep networking opportunities/purposes”) held at the Hilton Purobeach.

I’m usually against trivial hotels for events but there was a stunning rooftop pool terrace in the middle of Barcelona’s emerging arts and financial district. The event kicked off with that top notch level of CryptoFriends “chillaxness” and everyone was there to simply talk Blockchain, ICOs, and have a proper Netup. The day was capped off with special guest Brock Pierce giving an inspiring speech to move the intimate audience of startups, investors, and global press. Brock highlighted the opportunities and challenges in our industry right now and pointed out that it’s more vital than ever to build companies and ideas that put the users first. Growing a loyal and committed following is going to be the key to success.

His closing remarks about the importance of dreaming gave me the inspiration for this column.

Over the course of the day, others had shared their dreams with us. Ten startups pitched their ICO projects to win a chance of launching at the next Hypethon held at Blockshow Asia in Singapore.

We witnessed first-hand an amazing range of ideas being shared, from decentralised DDoS protection and reward-based event marketing to chatbots and Blockchain-based aerial vehicles. In the end, only three teams could make it through. A live Blockchain-based system was used for voting. First place was taken by United Traders, who aim to provide high-end solutions for the crypto finance world. I like their team a lot, the guys look young but so confident and professional. Coming in second was Izetex, a platform which harnesses mobile gaming to help local businesses attract customers. Their idea is close to that of PokemonGo, but it brings to the cryptomarket mass adoption and potential real money! Third place went to Prosense, the first global, decentralised platform for Virtual Reality content distribution. It is a platform for broadcasting different events in virtual reality and they have attracted more than 500 thousand viewers all over the world. 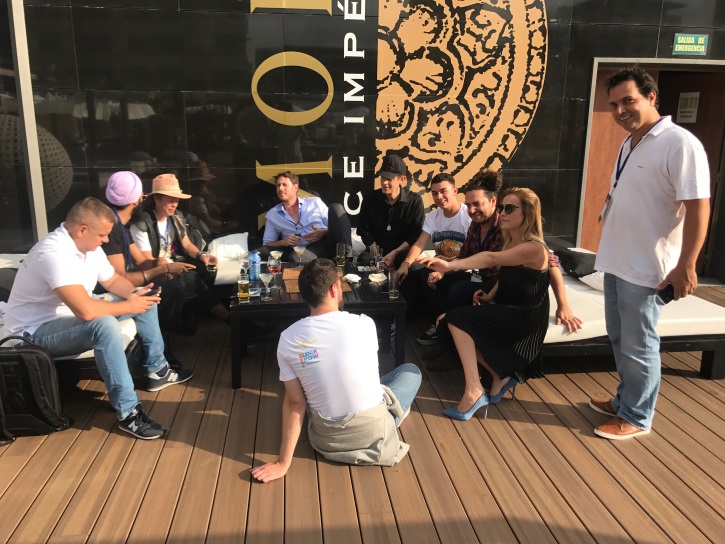 Developers of these projects will travel to Singapore on 29-30 November to launch their ICOs in front of potential investors and the global CryptoFriends community.

When we started CryptoFriends, our mission was to bring people in the crypto community together to share their opinions, expertise and build long-lasting connections (even friendships).  I am honoured to have the support of some of the leading names in Blockchain.

In addition to Brock, we heard from Crystal Rose, Eyal Hertzog, Jason King, Eric Benz and Alex Baush. Having all these people in such an intimate setting was truly a special feeling that no one who attended will ever forget. The Netup would never have been possible without the support of our sponsors, they all know who they are and why they are with us. I really appreciate your trust and confidence, guys, together we can do everything!

After the event finished, our team hosted keynote speakers, ICO winners and Netup sponsors to a ‘Proof-of-Steak’ dinner at the fashionable W Hotel. This was the second edition – “Proof-of-Steak 2.0” (the first one was in Russia before ICO-Hypethon on the yacht and then in Blockchain House).

It really was a perfect setting to enjoy each other’s company, share stories and build stronger and more durable friendships. In the coming weeks my team will be preparing for the next Hypethon at Blockshow Asia and while it’s extremely hard work, we wouldn’t do it if we didn’t love it! Just like Brock Pierce told us to, we’re dreaming big.