Dropbox: Why the 10-Billion-Dollar Company Needs the Blockchain

With an estimated valuation of around US$10 billion, Dropbox’s rise to fame was a direct result of some key strategies, but can the blockchain help the popular storage service achieve even greater success?

With an estimated valuation of around US$10 billion, Dropbox’s rise to fame was a direct result of some key strategies, but can the blockchain help the popular storage service achieve even greater success?

Many have questioned why the relatively young company, founded in just 2008, has skyrocketed to become a household name with over 300 million users. It is estimated to be worth anywhere from US$4 billion dollars, with Forbes magazine and other major outlets estimating the figure at closer to US$10 billion.

In either case, Dropbox has seen some impressive growth and, in January 2014, the company successfully raised US$250 million from investors. With the file storage market is only expected to grow as we continue to plough forward through the information age, MarketsandMarkets estimates that the public and private cloud storage industry will be worth US$56.57 billion by 2019.

In addition to Dropbox, other current market leaders include Apple’s iCloud, Google Drive, and Microsoft’s OneDrive. 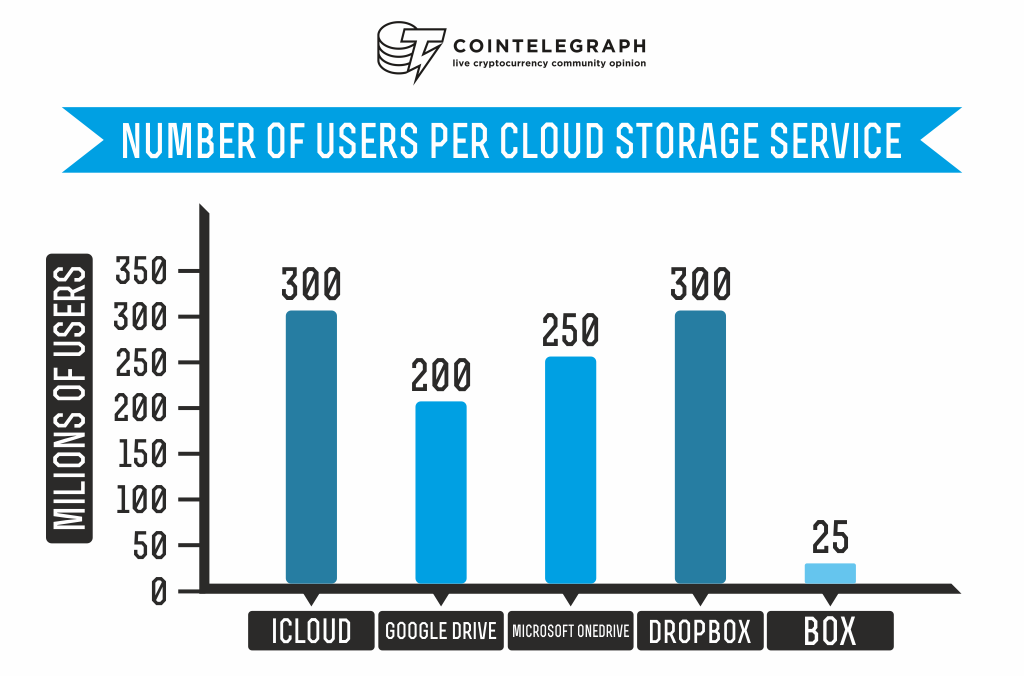 — The most popular cloud storage services of 2014

Seven Reasons Why Dropbox is a Success

First, let’s look at how Dropbox managed to become one of the leading providers in this rapidly-growing field. According to blogger Zach Bulygo from KISSmetrics, Dropbox’s rise to success is due to seven key strategies the company implemented in bringing its partners and customers on board.

Apart from offering users two gigs of free storage, Dropbox has succeeded by making it as simple as possible to sign up for their service and use it, and by making it easy to share information with people you know. In fact, one of the most popular uses for Dropbox is sharing photos with friends and family as a means to save storage space on physical devices.

Bulgyo lists the first five reasons for the company’s success as a “signup-driven homepage,” an “easy signup process,” “refer a friend,” “social media,” and “sharing with simplicity.” The final two reasons are not unrelated, with a contest called Dropquest along with “availability on multiple devices and platforms” giving the company a final edge over its competitors.

A few more facts about Dropbox:

But not everything is as rosy as it seems, according to Joseph Topal, who cites six major reasons why Dropbox is not secure enough for business—and probably you, the individual, as well.

The author mentions that despite the fact that Dropbox is one of the most commonly banned apps in the office due to increasing security concerns, the service has already “found its way into 70% of companies.”

The six points of vulnerability include:

Increasing competition comes from similar services, such as Box, which has been touted as a better option for business. Competitors can easily replicate and improve on Dropbox’s business model, and this should be an obvious concern for the current market leader.

But the most important issue for Dropbox users when trusting any third party with their personal files is, undoubtedly, security. No need to look far for an example: Just last month, nearly 7 million Dropbox usernames and passwords were hacked, albeit via third-party services, from which hackers were able to obtain login information.

With the ever-increasing digitization of money, cyber security will be the biggest concern and the biggest challenge for this industry going forward. Today we are seeing more and more media reports on yet another celebrity whose nude pictures were stolen, or another cyber attack such as the recent attack on JPMorgan Chase, which resulted in a data breach affecting 76 million households and 7 million small businesses.

Other tools promising to shield users from prying eyes, such as the popular “anonymous” web browser Tor, have also had their own share of problems. But the fact remains that, given the current method by which data is stored and transferred via the internet, hackers and cyber-security firms will continue to try to one-up each other in a perpetual game of cat and mouse.

The fundamental problem lies in the centralized structural framework itself, and with how and where data is actually stored. Fortunately for us, the advent of blockchain technology did not just bring us a better and more secure way to pay for things—it also opened the door to other applications, including decentralized data storage.

In fact, startup companies in the crypto space, such as Storj, are implementing blockchain technology to store data in a decentralized way without any servers. Storj is based on blockchain technology and p2p protocols that offer users greater security, greater privacy, and encrypted cloud storage. What’s more is that this service not only promises to be 10 to 100 times more cost effective compared to traditional cloud storage services (see chart below), but it also gives users the option to share their hard drive space to earn money.

We reached out to Storj and asked what are the benefits of decentralized cloud storage. Founder and head developer of Storj, Shawn Wilkinson explained to Cointelegraph via email:

“[Decentralized storage] increases security, only the users hold the keys to the data. Increased uptime, no central servers or switches to go down. Increased privacy, we don't store identities on the network. Decreased cost, cloud companies charge 10x-100x their core costs.”

And while certain limitations do exist, which could slow the development of these mesh networks, cryptocurrencies could play a big part in incentivizing participation, as explained in a Bitcoin Magazine article:

“The main drawback is that this requires all users to carry other users’ traffic, which costs computer resources and bandwidth. The best idea for incentivizing participation so far would incorporate cryptocurrency by either rewarding coins to those who route more traffic than they generate, or charge a fee to those who don’t. The beauty of this solution is that it decentralizes the communications industry, which by its nature is prone to monopoly–conglomerates like Comcast, Verizon or Shaw in North America […].”

“Laying cable lines is rather expensive; we would have to unearth concrete and pavement each time someone moved and lines needed to be moved or upgraded. As wireless technology advances, however, the price of powerful WiFi routers will reach a point where they can effectively replace copper wires for the middle class in relatively urban areas.”

“Instead of connecting to a modem installed by your Internet service provider, these routers connect directly to each other, or to long-range routers designed to reach past unpopulated terrain where no users live. Anyone connected to an ISP can act as a gateway, allowing others to reach content left behind in the historical system.” 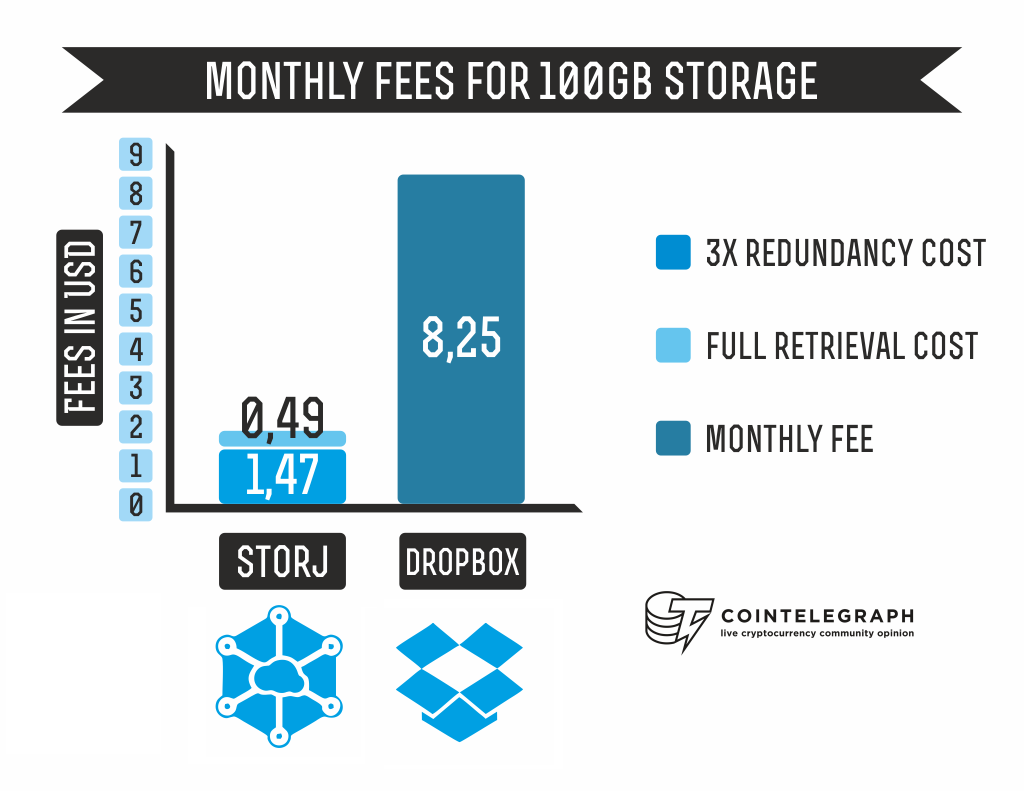 — Cost comparison between Storj and Dropbox for 100GB

Meanwhile, other pioneering companies such as Maidsafe are taking it a step even further by building a decentralized internet based on peer-to-peer, mesh networks. Maidsafe CEO, David Irvine explained to Cointelegraph, in an interview back in April, the reason he started his ambitious project:

“I thought the Internet had become a very unnatural design and could not bear to see people lose control of their identities and personal thoughts. I figured that with all the computing resource available in people’s personal computers that we could do a much better job with what we have.”

Maidsafe’s attempt at a decentralized internet appears to resonate with the public, since the company raised over US$8 million dollars during its massively successful crowdsale back in the spring of 2014. 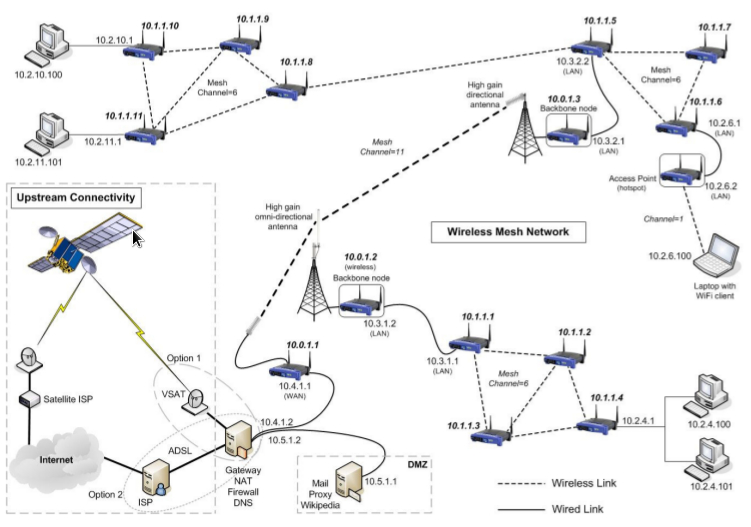 - An example of a wireless mesh network

Blockchain-inspired technologies could reduce our dependency or even eliminate the need for centralized networks and servers in the future. Thanks to projects like Maidsafe, we can now not only rethink how we store, share and access data, but we can already implement these ideas because the necessary protocols are already at our disposal.

Meanwhile, other non-blockchain services offering their own breakthroughs, such as Syndicate, are also hot on the heels of Dropbox. Syndicate’s service “combines existing cloud storage providers into a single (virtual) cloud storage,” which the company claims “decentralizes your data so you control it, not the providers.”

Dropbox, PRISM, and the NSA

Another area of concern for major online storage providers are the revelations that US government agencies have forced US companies to turn over customer data. This has damaged trust in cloud providers. In fact, Edward Snowden stated that “Dropbox is an NSA surveillance target,” and warned users to “use Spideroak instead.”

Prior to the NSA leaks, the global cloud market was valued at US$131 billion with American companies comprising a large chunk of that figure. However, after the revelations, it is estimated that the potential damages inflicted on the US cloud industry will range between US$22 and US$35 billion for the next three years alone (see chart below), according to a research paper published by The Information Technology & Innovation Foundation (ITIF).

Considering that the NSA leaks have also had significant impact outside of America, especially in Europe, it is not too farfetched to assume that users will have a harder time trusting these companies with their personal information, and they will seek more secure alternatives that can guarantee greater privacy. With all of the new players (e.g. Box, Storj, etc.) and the innovation penetrating the cloud storage space, the current top positions held by the likes of Dropbox and Apple’s iCloud are starting to look rather tenuous. Meanwhile, as more and more big players such as Dell and Paypal begin to accept Bitcoin—and even Wall Street is getting into the mix—the mainstream media is beginning to change its tune, underpinning the general consensus that Bitcoin is here to stay.

In whole, this is all looking very promising for the nascent blockchain technology and the myriad of startups that it spawns, as even the mainstream media concedes that the blockchain has the potential to revolutionize and disrupt many industries.

And as already mentioned, the advantages of decentralized systems in regards to security and cost will drive the main disruption going forward.

The use of mesh networks, blockchain technology and cryptocurrency tokens will lower the operating costs of centralized server-based networks by spreading the resources and costs, as well as the rewards among the network’s users. Security will be greatly enhanced as the centralized points-of-failure (i.e. servers, counterparty risk, etc.) will be eliminated, thus removing any systemic risk.

This will give companies like Storj a competitive advantage over Dropbox and other centralized cloud storage services, whose users will soon have an alternative that will provide greater security at a fraction of the cost. Thus, if these legacy companies are serious about staying competitive in this rapidly growing space, they should start looking into what experts call one of the biggest inventions ever as a way to not only cut costs and secure user data, but to also potentially reward their users with crypto-tokens.

When asked whether companies like Dropbox would benefit from implementing decentralized solutions, Wilkinson remarked:

“Yes, Dropbox would benefit greatly from increased security and reduced cost. But at the end of the day they are a profitable billion dollar business so I don't see them making any major changes in their business model anytime soon.”

Of course, decentralized storage-solution providers still have a long way to go with respect to legacy companies. But let’s not forget that it only took Dropbox six years to achieve an estimated worth of US$10 billion and, considering that the IT industry has been growing at an accelerating pace, a company like Storj could become the new favorite, real soon.

“When somebody with a strong brand and security level establishes it as a reliable service, then the whole industry will follow.”

[Note: Cointelegraph reached out to Dropbox for their thoughts but did not receive any response.]