Ethereum’s hashrate recently surged to a 20-month high but will ETH price follow?

New data from glassnode and Etherscan show Ethereum’s hashrate has risen to a 20-month high and this has led some optimistic traders to suggest Ether price will continue to rise to new highs in 2020.

The explosive increase in Ethereum’s hashrate appears to be heavily influenced by the rapidly growing Decentralized Finance (DeFi) sector and at the time of writing is hovers around 201,000,000 GH/s, a level not seen since 2018. 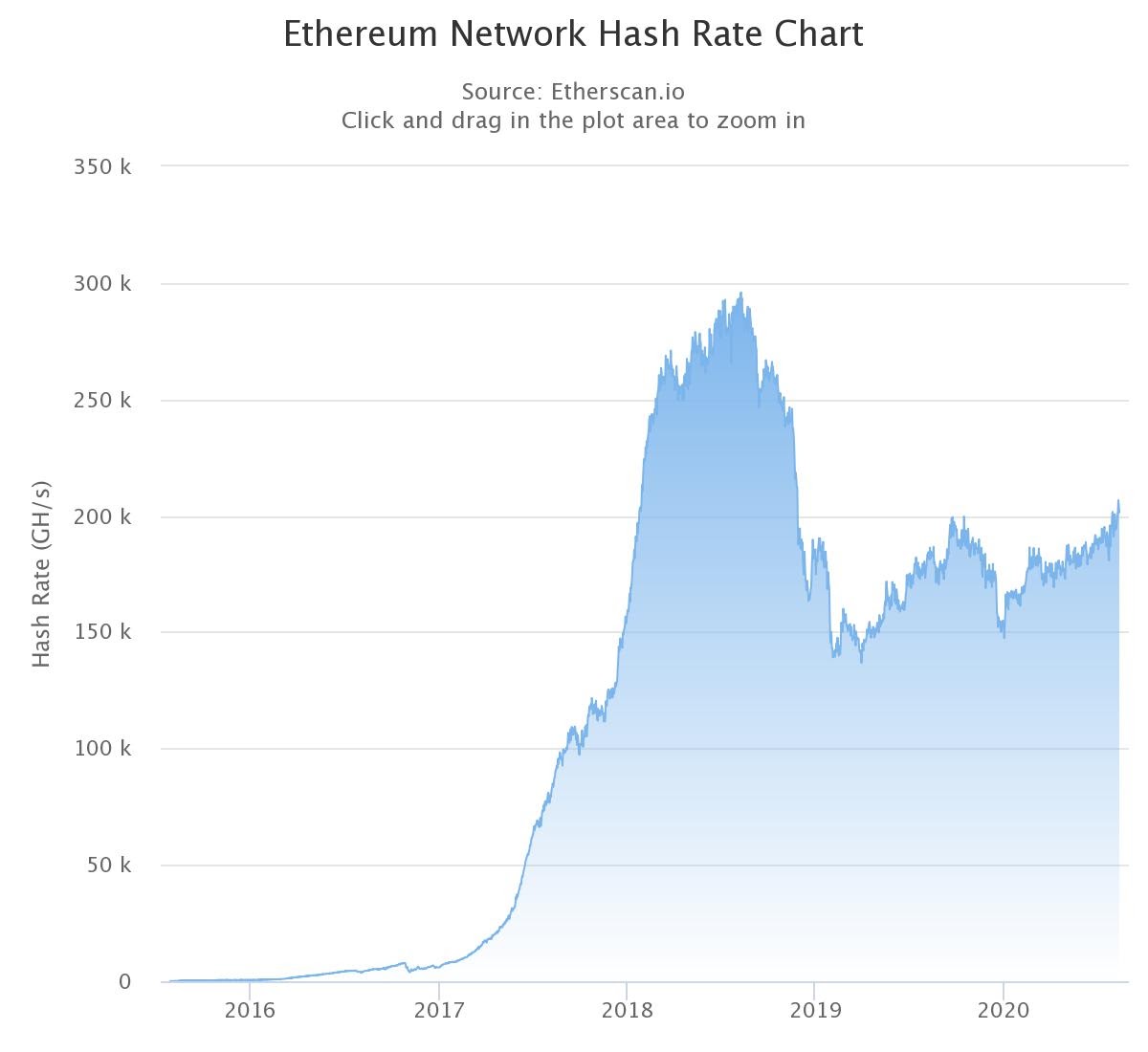 In recent weeks, demand for Ether has increased noticeably and since mid-June, an increasing number of users started to utilize DeFi platforms, leading the Ethereum network to become clogged.

Consequently, transaction fees have started to approach record highs due to the sudden spike in transactions and heightened activities on DeFi platforms and Uniswap.

Is a higher hashrate good or bad for Ethereum?

The surging hashrate, Ether price, and rising fees signal that the user activity on the Ethereum blockchain is increasing. Although the momentum of Ethereum has primarily been fueled by DeFi, the data show the fundamentals of Ethereum have strengthened.

The hashrate of the Ethereum blockchain network has also been increasing because of rising miner revenues from fees. In periods of network congestion, users typically compete against one another by attaching a higher gas cost or transaction fee.

The competition in the market leads to higher fees at times, especially when the interest in DeFi is surging, causing miner revenues to rise. An increase in revenues would then compel more miners to mine on Ethereum, leading to an increase in the hashrate.

Researchers at Glassnode explained that miner revenue from Ethereum fees recently hit an all-time high at 18%. They said:

“Miner revenue from fees on Ethereum has skyrocketed in the past two months, reaching an all-time high of around 18% (30d moving average). Conversely, this has brought the Fee Ratio Multiple (FRM) to lows never seen before on Ethereum. Created by Teo Leibowitz , the Fee Ratio Multiple (FRM) is defined as the ratio between the total miner revenue and transaction fees. FRM indicates how secure a chain is once block rewards disappear.”

In recent weeks, the craze around Uniswap and new DeFi protocols, such as Yam Finance, led fees on Ethereum to outpace Bitcoin. Cryptowat.ch, a market data provider owned by Kraken exchange said:

“On-chain transaction fees on Ethereum continue to outpace Bitcoin. The gap is now up to $1 million a day.”

Some critics may justifiably argue that higher fees on the Ethereum network negatively affect users and complicate the user experience.

An alternate interpretation suggests that rising fees signal that user activity on the network is climbing and the hashrate is rising as a result. These are healthy signs as during the darkest days of the 2018 bear market many crypto investors criticized the lack of users on the Ethereum-based dapps.

Additionally, as long as Ethereum remains a proof-of-work (PoW) blockchain network, the hashrate serves as an important metric for blockchain security.