ISIS to Accept Bitcoin a Hoax?

The leadership of ISIS was considering accepting Bitcoin donations to help their cause. 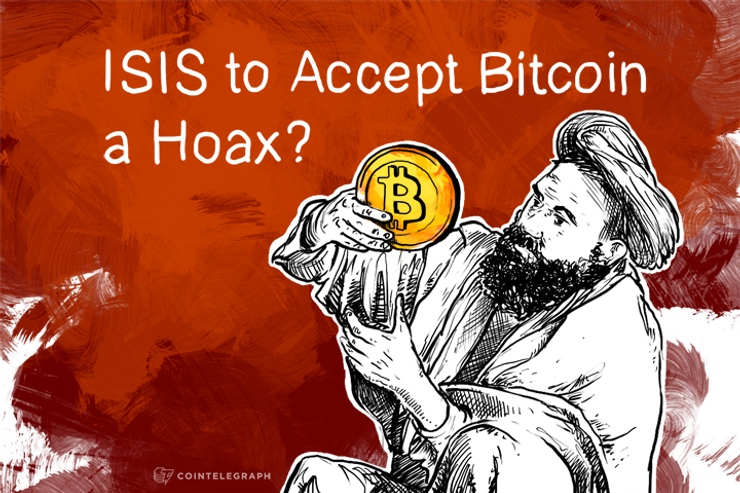 The horrible situation in Iraq and the name “ISIS” or “ISIL” has been all over the major media and the idea that the nation of Iraq might fragment has moved from possible scenario to probable outcome. The country seems likely to either split into three separate political entities, with the Kurds and Sunni controlling most of the country and the Shiite controlling only the far south. The other possibility is for the factions to unite with Syria to form much more powerful state and usher in a Caliphate.

But an interesting revelation surfaced earlier this week when the leadership of ISIS was considering accepting Bitcoin donations to help their cause.

The United States worked very closely with the Mujaheddin in Afghanistan two decades ago when it was in the US interest to push the Soviets out of that country. After the Soviet draw back these men who consider themselves Holy Warriors for Allah, found themselves with no enemy and some of them went on to become what we now call Al-Qaeda.

The ISIS in Iraq is certainly Mujaheddin because their ultimate goal is to reestablish a Caliphate in the Middle East. A Caliphate is simply a civil society that lives by religious law and in fact some of the most enlightened times in history, much more so than the Greek era, was during the Abbasid Caliphate that ran from the 10th to the 12th Centuries.

While it is likely that a modern Caliphate will not be as progressive, whether we like it or not, the idea is just as possible as a representative democracy or any other political system taking root in these embattled countries. Especially, since the borders of the nation of Iraq and Syria were not drawn by the people who lived there but by the British a century ago.

But there is another reason why this news was used as an excuse to present Bitcoin as a tool to aid terrorism and illegal activities. During the 1980's, Colombian drug cartels were bringing duffel bags of cash into banks for deposit. Not too long ago, US prosecutors fined a multinational bank that had been knowingly laundering money for both drug cartels and terrorist groups around the world.

There was never any talk during either of those massive crimes of banning the US dollar. The bankers never even went to jail. The fact is that it doesn’t matter what type of currency is used. In the aforementioned cases, criminals would have gotten away just as easily whether it was dollars, pesos, gold bar or Bitcoin. It must be noted that this is a failure of the regulatory system, not Bitcoin or its underlying cryptographic technology.

If the major media has serious concerns regarding Bitcoin or any cryptocurrency, it is their duty to inform the public and create a dialogue. But reports so far about the ISIS story has looked more like the “Yellow Dog Journalism” used by William Randolph Hearst to promote the Spanish American war.

Instead of merely presenting the facts, these organizations use buzz words to evoke an emotional response from the public. “Terrorist” has been the favorite for nearly 3 decades and gets applied indiscriminately if it suits a purpose. But regardless of what ISIS is or plans to achieve, it was created and funded using fiat currency up until this point.

There might be elements within ISIS leadership who want to use Bitcoin to finance terrorism and have even openly suggested it according to some sources (a coindesk post with only one supporting link, for “Skye News” that was non-functional) in the Bitcoin community but there have also been reports from other sources that the entire story was a hoax, which seems much more likely. The only exception was a story in Business Insider that linked to a document released by a supporter of ISIS, not ISIS itself.

The problem is that people are conflating supporters with members, Mujaheddin with Al-Qaeda, all to make Bitcoin look bad.

The major media outlets know that terrorism is funded in many different ways, including duffel bags full of cash and multi-million dollar bank transfers; and yes, these nefarious organizations will use Bitcoin and any other technology they can benefit from.

But that does not mean that Bitcoin is at fault any more than it means the dollar is at fault when it is used. Bitcoin enthusiasts should make this clear whenever the subject of criminals or terrorists using Bitcoin comes up, understanding that most people do not know that for this purposes there are no differences between Bitcoin, fiat currencies or any other tradable commodity.