Keep Money in the Game: OneCoin Moves On To New Fantasy Blockchain

OneCoin claimed it has switched on to its new Blockchain. Tim Tayshun, CEO of Ezcoin, gives his view on how OneCoin operates and why he thinks it’s a deception.

On October 1, OneCoin, a self-declared cryptocurrency and trading venture based out of Bulgaria, has announced at a conference in Bangkok, Thailand that it switches to the “new Blockchain”, “transferring coins” from the old one to the new one.

OneCoin has been in focus of Cointelegraph for some time. Recently the authorities of the UK and Sweden has warned investors that OneCoin is suspected to be a pyramid scheme with no verifiable evidence to back up any of its business claims.

According to Tim Tayshun, CEO of Ezcoin, OneCoin is pure fraud and deception. He gave Cointelegraph his version of events that took place during the conference when OneCoin had mysteriously doubled the coin of every member.

When asked whether OneCoin really delivered a new Blockchain to its clients, Tim Tayshun said:

“To 8,500 or so Onecoin cult members attending an event that day, the answer would be a resounding yes.”

“Keep money in the game”

Tim Tayshun continues his story: “Even a day prior to the event, Joby Boughey, formerly involved in the U-Token/U-Fun affair stated in a video on his Facebook page, that after today “nobody will say it’s a scam!” Ken Labine, Canada’s #1 Onecoin dealer, had similar things to say. However, upon closer inspection even my own jaw dropped at the tremendous caper being orchestrated live at the “OneLife Mastermind Event” at the Impact Arena in Bangkok, Thailand. It was midnight California time when the fun began and the “chat box” on the live video stream was opened for all...”

Ruja Ignatova, CEO of OneCoin claimed that the mining taking place was being shown live onstage on their new Blockchain. Tim Tayshun thinks that was untrue: “What we could clearly see is that the only thing that was “switched on” was a flashing banner over THIS LOOPED VIDEO.”

As Tim Tayshun recalls, there was no explanation whatsoever of how or if the old coins were transferred to the new Blockchain. He also thinks that it is impossible to mine so many coins within just a minute:

“It was claimed that in roughly 60 seconds, the first Genesis block of the new Blockchain ‘mined’ 1,986,580,000 coins. This is nearly 100x (94.5x) the amount of Bitcoin that will ever have been created over the next 124 years when the last Satoshi is finally rewarded sometime around the year of 2140.”

Tim Tayshun noted that Ruja announced the coin will go public during the second quarter of 2018. Tim doesn’t believe it: “OneCoin claims every coin is worth $7.80, and each OneCoin block will disperse exactly 50,000 coins per minute. The total market cap of top 100 Cryptocurrencies is $12,210,633,867. OneCoin is saying the new Blockchain will be pumping out coins worth more than the market cap of the top 100 crypto-currencies combined – every 30 days”.

“So, by snapping her fingers and waving her magic wand and yelling, “Go! Go! Go! Mine!” Ruja is projecting one trillion Dollars worth of coins in 5 years - says Tim Tayshun. - OneCoin logic doesn’t even try to make sense.” 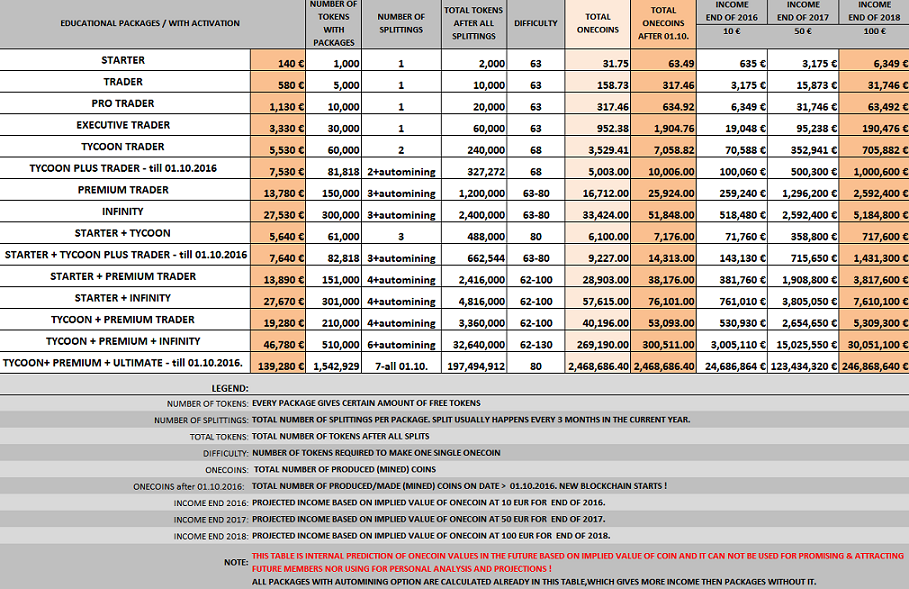 “As we all know, each Ponzi playbook is this: Keep money in the game as long as possible.”

He continues: “Onecoin/ OneLife Network requires new investor money coming in to pay out existing investors. Otherwise, the well will run dry and the unsustainable scheme will collapse. Onecoin/ OneLife have invented clever ways of doing this. Mostly, it is to encourage users to “roll their winnings” into the next package up, or even the same package (ie., 2-3 or more Tycoon Packages at 5,000 Euro each are advantageous for speculating investors) which come with more tokens and higher “mining” incentives, splits and other nonsense. And the claim that OneCoin sells “Education Packages” is utter nonsense. Onecoin/ One Life have recently tried to entice new victims with packages costing as much as 27,500€ and even 118,000€!  Which resulted in the related YouTube video having been taken down for violating rules on scams.”

“Through a variety of magic splits, doubling, auto-mines and other fantasy crypto-technology terms, investors were promised a ROI of over 2,000,000 coins worth over $14 million. Onecoin’s uses of KYC actually as well as not having a wallet betrays their ignorance of cryptocurrency. Moreover, you can only withdraw a fraction of your deposit. That means OneCoin is not a cryptocurrency. How they can bring on board one million merchants without a wallet? Does Johnny Burger King at the cash drawer have to register his ID to accept payments, or does he have to call the boss at one of the other stores? Do these “Leaders” just blurt out the first half-baked idea that comes to their head?”

“95% of victims will be shocked at their own ignorance and for not seeing and listening to so many warning signs, says Tim. Only about 12.5% will even make back their initial investment, meaning that 87.5% will lose any money they have invested. Some of that percentage will lose everything, including their home and life savings, as I know of people who have literally put up mortgages gambling on a get-rich-with-little-work philosophy.”

According to Tim Tayshun, bringing the people behind OneCoin to book should be the focus of the cryptocurrency community in order not to jeopardize the genuine cryptocurrencies out there. He says:

“For the real digital money community and for Blockchain enthusiasts, the best we can do is to not let mainstream media and regulatory bodies (ie., Govt.’s) look at this as another Mt. Gox (but much bigger), and try to create stricter regulations, laws, compliance and oversight which will only stifle innovation in this field and make it more expensive for start-ups and honest players in the space to continue pushing the boundaries of this technology. The community will need to push to convey the understanding that this has nothing whatsoever to do with cryptocurrency or the Blockchain technology. That has always been one of my greatest worries when watching this unfold.”