With no banks or international payment systems currently servicing the 3.8 million residents living in secessionist territories of eastern Ukraine, Bitcoin transfers remain one of the few options. 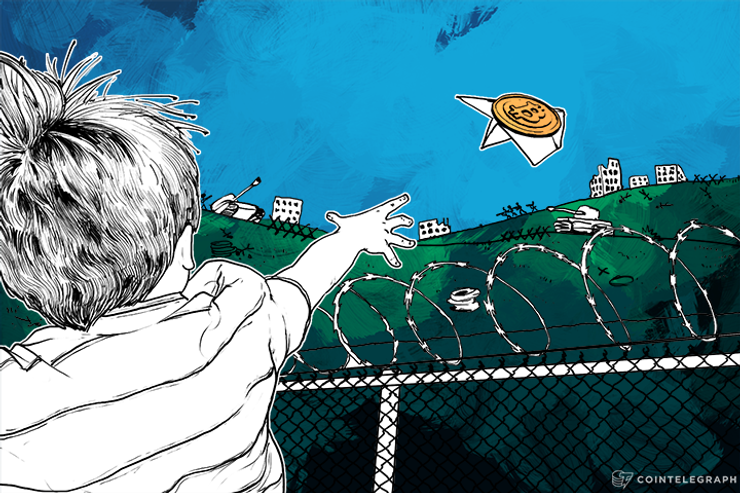 With no banks or international payment systems currently servicing the 3.8 million residents living in secessionist territories of eastern Ukraine, Bitcoin transfers remain one of the few options.

“Bitcoin is being used in the eastern territories [of Ukraine].”

In November 2014, the President of Ukraine, Petro Poroshenko, ordered the National Bank of Ukraine to make banks stop all money transactions in territories not under direct governmental control. This was part of his strategy to isolate the secessionist territories both financially and economically as all trade operations were also prohibited.

The Security Service of Ukraine has been taking measures against the secessionist regions with “the blocking of accounts, cards, various ‘bitcoins’ and so on, where the separatists are trying to funnel money,” according to the Head of the SBU, Valentyn Nalyvaychenko.

The RBC news agency reported [in Russian] that 81 bank branches in the Donetsk region and 66 banks in the Luhansk region have closed their doors and ceased operations, including the branches of major Russian banks, Sberbank and VTB, due to the potential international sanctions that may otherwise follow.

This is the first time in modern history when such a large swathe of territory with a pre-war population of 3.8 million people has been left with no banking services whatsoever. All business and personal accounts were closed and ATMs stopped operating leaving businesses and millions of people without any means of accessing their money.

In March 2015, the unrecognized Donetsk People’s Republic (DPR) declared the launch of its own Republican Bank that started servicing personal and business accounts. The bank has figured out a way to receive payments from Russia using the Russian-based Anelik payment system and the Bankomatika  service. No such bank was created so far in the other secessionist territory, the Luhansk People’s Republic (LPR).

Meanwhile, there is no coverage by international or Russian payment systems for these territories due to the threat of US and EU sanctions. In fact, even the Anelik system uses the Russian city of Rostov as the formal destination for payments on the receiving end, whereas the physical money actually goes to Donetsk.

Upon receiving a transfer authorization, Bankomatika will notify the Central Bank of the Donetsk People’s Republic and will request to issue the amount to the given individual, according to a source in the DPR. “Cash is not being transported back and forth across the border. Both sides issue money from their own reserves and mutual settlement is carried out at the end of the month.”

Cointelegraph spoke with the Head of the Cryptocurrency Foundation Russia (CCFR), Igor Chepkasov on how cryptocurrencies are being used in these runaway regions and whether the Ukrainian or Russian governments are capable of doing anything to stop this.

Cointelegraph:  With a complete financial blockade by the Ukraine and a partial one from Russia (by banks who are trying to avoid further sanctions), the residents of these republics are essentially left unbanked. Are bitcoins being used in Donetsk and Luhansk for money transfers?

Igor Chepkasov: I must assure you that bitcoin is being used in these eastern territories, which are occupied by pro-Russian armed forces. A certain segment of the people there is systematically carrying out transactions with bitcoin. I received information about the transactions as an insider of one of the exchanges.

CT: How and from where is this done and by whom (private individuals, organizations based in these unrecognized republics, etc.)? What are the volumes?

IC: As you know, to register on a “virtual” exchange and to withdraw cash, you have to present your telephone number, bank or payment system details and personal information – a scanned image of your passport and sometimes even utility bills. It is because of this information that I discovered that there was a massive outflow of funds from this region when Crimea was preparing to “unify” with Russia.

“There were even cases when bitcoins were converted to Euros and dollars and where transferred to offshore accounts of companies based in Eastern Europe and the Baltic countries.”

Sometimes fairly large sums of bitcoin were bought in Crimea and later in the eastern occupied territories at exchanges, which were then converted into rubles and transferred to bank cards of one Russian bank that use the popular Russian payment system in order to cash out in Russia or even funnel these funds via a long chain of numerous American, Spanish, Cypriot and offshore accounts.

There were even cases when bitcoins were converted to Euros and dollars and where transferred to offshore accounts of companies based in Eastern Europe and the Baltic countries.

But I wouldn’t say that bitcoin-business is rapidly developing in these occupied territories and in Ukraine as a whole. Regular citizens by and large do not use cryptocurrency and also prefer conventional means or exchange points for money transfers.

In Rostov [a city in Russia], there is a conversion center that also operates based on the Hawala principle, which accumulates significant funds. This center also has its fair share of people who are familiar with cryptocurrency. Moreover, in many Russian cities there are volunteer teams who collect funds to support so-called “militias” including bitcoin, which you can see here. The page contains a bitcoin-wallet, which at the time of my comment holds 6.907452 BTC.

CT: Ukraine attempted to ban Bitcoin transactions in this region via its Central Bank. Is Ukraine capable of doing this and will this be successful?

IC: As far as I understand, Ukraine did not go beyond issuing a warning. However, on March 19, the operating account of BTC TRADE UA (Ukrainian cryptocurrency exchange) was suspended in Privatbank based on the suspicions that this exchange was “financing terrorist activity.”

My source in Privatbank told me that they encountered a flood of marked bills from the military action zone of Donetsk and Luhansk. There is evidence to state that BTC TRADE UA was used by miscreants to fund their accounts on the exchange using mobile terminals, after which they would use the service to “wash” these funds and then withdraw “clean” money.

I am not accusing, nor do I suspect the personnel of the exchange in dishonesty and deliberately breaking the law, though they even openly stated that they “did not sufficiently secure client funds.”

“If anyone in [Donetsk and Luhansk] would like to use bitcoin, then they will do so.”

CT: What will happen with these monetary flows in Donetsk and Luhansk when Russia will officially ban the use of cryptocurrency in August?

IC: A ban on cryptocurrency in Russia cannot affect the situation in sovereign Ukraine. If some crypto-users in Russia are even saying they will continue to use it secretly if a ban is imposed, then what can we say about Donetsk and Luhansk, who are themselves unrecognized?

Therefore, if anyone in these territories would like to use bitcoin, then they will do so. We have to remember that Donetsk and Luhansk are also outside the legal environment of both the Ukraine and Russia. Thus, no measures from the Ukrainian side or the Russian side will have any affect on the situation there.