Kryptokit Kontest: 2 Bitcoins Up for Grabs

Kryptokit, the Toronto based makers of the instant Bitcoin wallet “RushWallet” announced the release of a new video showcasing its newly released crowd-funding tool and demonstrating how their brainwallets can be used as both digital wallets and marketing tools. 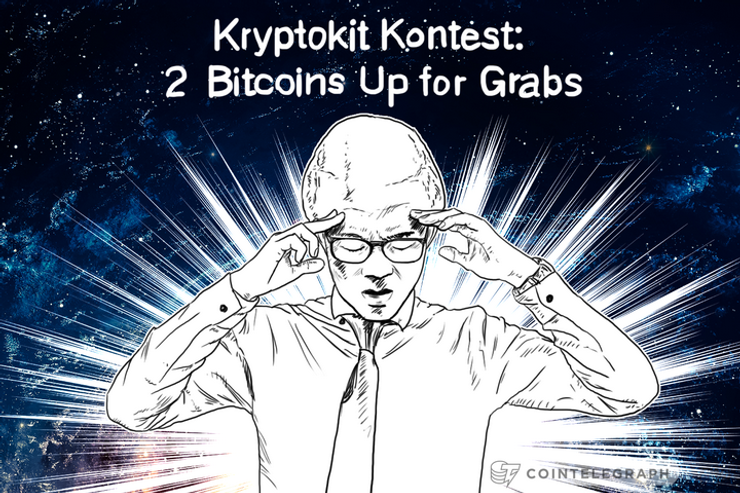 Update: Kryptokit's press release incorrectly stated both that 10BTC and 2BTC was up for grabs. We have since been informed that only 2 BTC, representing a grand total of US ~$800, is actually up for grabs in the contest. We regret the error and will update the artwork momentarily. We decided against removing the article completely because we did not want to increase confusion, even though a 2BTC is significantly less newsworthy. The original article remains below. You can find out more here.

Kryptokit, the Toronto based makers of the instant Bitcoin wallet “RushWallet” announced the release of a new video showcasing its newly released crowd-funding tool and demonstrating how their brainwallets can be used as both digital wallets and marketing tools.

This video has a rather interesting twist, however. Instead of the same bland presentation that makes us want to put our hands in a blender just to stay awake, Kryptokite has created a humorous video with a diabolic series of clues.

Contestants must find the clues, decipher them and locate the 30 brainwallets that are filled with bitcoins. If a viewer is able to figure the clues out they are invited to transfer the winnings into their own wallets. The contest will run for one month or until all of the wallets are claimed.

Kryptokite has two goals with the video contest. The first is, of course, to showcase its products in an entertaining way. While the other is to use their products to create a real-life demonstration of the crowd-funding tools abilities and how easy brainwallets are to use for marketing and promotions.

The crowd-funding tool allows users to create, manage and monitor several campaigns at one time and unlike other crowd-funding tools there are no fees, restrictions or centralized approval process and with this tool you are able to start spending collected funds instantly and data is stored on the client side, not with RushWallet, as are any funds collected.

The video tells the story of Dimitry who, tired of suffering because of a co-workers noisy keyboard, decides to start a crowd-funding campaign to buy him a new one. While you are following Dimitry’s small adventure you are given a basic tutorial about how the crowd-funding tool from Kryptokit works.

There will also be clues liberally scattered throughout that give viewers passphrases. These phrases are then used to unlock the brainwallets containing the Bitcoins. There has been some controversy about brainwallets however, because if the passphrase is lost or its owner passes away without sharing it, these wallets are lost forever. Anthony Di Iorio, Kryptokit CEO, said about these complaints:

“Brainwallets often get a bad rap. They aren’t understood well in the bitcoin community. When a brainwallet is set up properly, it can be extremely powerful and secure. You are always in control of your assets and able to access your bitcoins anywhere in the world, provided there is internet connectivity. You don’t have to carry anything around - all your bitcoins are stored in your mind.”

The passphrase essentially works at your wallet’s private key. Steve Dakh, CTO at Kryptokit said that passphrases worked with the same rules as passwords, i.e. the more unique your password the stronger it will become. The words in your passphrase should be a phrase that no one is ever likely to use. Avoid movie titles or lines of dialog or anything that might have been written in a book.