LIVE from The Bitcoin Podcast studio, Burp! Coming at yeh head holes 'live' with thinkies, if what’s and what have ye’s, all three hostastic hosts kick it in this rowdy-rowdy-round table. 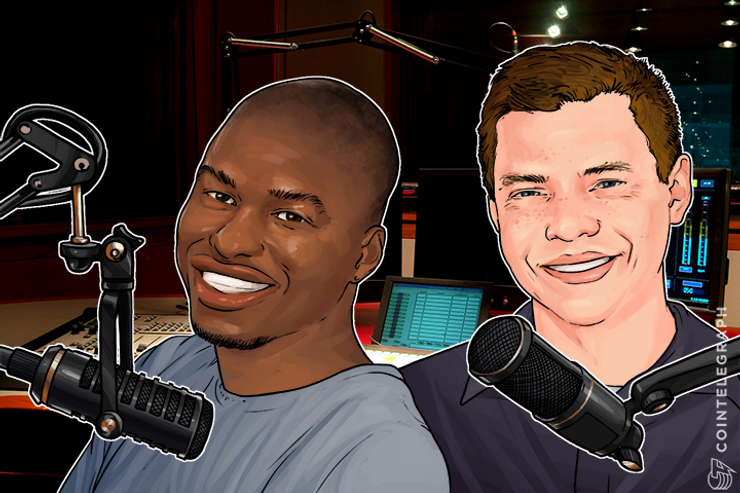 LIVE from The Bitcoin Podcast studio, Burp! Coming at yeh head holes ‘live’ with thinkies, if what’s and what have ye’s, all three hostastic hosts kick it in this rowdy-rowdy-round table. Welcome to Giggleville, in there hysterical episode where the least is first and the first is last. Corry, Cello and the fan favorite (3 people voted) Dee, take us on an unbelievably entertaining journey just before arriving at Interveiw Station. Toot, Toot… All aboard!

There’s philosophy and possibilities on the fundamentals of bitcoin, growing pains and brain gains, drunk coding, sex tapes and plenty more in store for you on this week's eppysode. Find out the boy’s favorite aspect of bitcoin and why. Learn with deep insight and perspective in what got and keeps their passion in the cryptosphere. You’ll catch a whiff of conspiracy theories and you’ll get a taste of foresight, so be ready for the deep and heavy seriousness in this roundtable. Plus you'll learn how to tell when you found "the one" Hint: (something about dick pix).

Pop in those $159.99 Airpods you got for 20% off, using our purse.io affiliate program and get ready to melt the wax out your ears with this acoustic fire. Cello goes toe to toe with not one but two guests in this medically inclined mini interview. Talking blockchain and health care data, while sharing the hot-seat, we have James Lloyd CTO & QuHarrison Terry marketing both from Redox in the hizzy. Since Cello now works in the medical field and Redox is a medical records api this interview gets downright nerdy with healthcare, blockchain and marketing related chit-chat.

“The blockchain ain't nothing but a hackable database that’s daisy chained.”

In this short episode we get spoon fed a healthy buffet of knowledge on the practical and applicable side of the blockchain. The least likely of places we’d expect to learn about HealthCare is on a bitcoin podcast, let alone The Bitcoin Podcast, but oddly enough this is where crypto technology has taken us in 2016. Started from the Crypto now we’re here! Listening to how medical technology could utilize the blockchain is an auditory refreshment to the money, money, money, talk associated with blockchain technology. These are the killer apps bitcoin has been waiting for and they are proving that bitcoin is much, much more than just money. Remember, the currency that is bitcoin is the byproduct of a bigger machine that is Bitcoin.

In this 30 minute interview the show takes us to the peak of Mount Nerd-e-ness to gather some wisdom from the wise men that are James and QuHarrison. Talking about on-ramping people within their circle, their opinions on use cases for blockchain in the medical industry, and some juicy bruised member-berries like mining coins.

The healthcare tech talk in this episode is on a comprehensible level to the point that even a neophyte like myself could grasp the lingo and follow along easily. Everything discussed in this interview really puts healthcare data and blockchain potential into perspective. Speaking of perspective, there’s not much culture diversity in the tech startup space, so Cello asks QuHarrison his thoughts on that very topic. Listen to the episode for his insightful reply.

This might be a short supercut interview but they make up for it in the round table. They got this one busting at the seams with classic inside jokes and remarkable details on a multitude of topics. So grab a pad, take some notes, ya’ll gone back to school with this one folks. Gonna learn today! How bitcoin and blockchain technology can change the medical data game for the sake of the patients, records, privacy and security.

You'll care more about health care after listening to this medicinal episode. Finding yourself googling medical plans and your medical history and it's privacy... Or you'll think about playing street fighter and ignoring the boring adult world because it's lame noise. Something about blockchain meets the medical industry brings a familiar vibe that sticks my interest in something, like how the blockchain brought me to my  interest to the economy. Click here now, for a healthy dose of educational and hysterical entertainment that is the experience known as The bitcoin Podcast!

10 Words or less, what is bitcoin?

"An effective implementation for decentralizing trust in a financial transaction."