Robinhood: How the Fast-Growing Stock Trading App Got Into Crypto

The short overview of the second most valuable fintech startup in the U.S.

As been reported by TechCrunch Sept. 6, stock and cryptocurrency trading platform Robinhood is planning to launch an initial public offering. Now the company is looking for a chief financial officer (CFO). Robinhood CEO Baiju Bhatt added that the startup is undergoing a spate of audits from the U.S. Security and Exchange Commission (SEC) and the Financial Industry Regulatory Authority (FINRA) in order to ensure regulatory compliance.

After raising $363 million in a series D funding round and $110 million in a series C round, Robinhood was valued at $5.6 billion, making it the second most valuable fintech startup in the U.S. Currently, there are reportedly five million users conducting trades with cryptocurrencies on the Robinhood platform. Let’s recall the path of a mobile startup to the promising position it now occupies.

What Robinhood is and how it works

Dubbed by the press as a "trading app for millennials," before its involvement in crypto, Robinhood existed as a solely mobile application for stock trade. It had a plain and simple, user-friendly design, democratic deposit levels (i.e., aimed at under $1,000 users) and something much more revolutionary — a zero fee for trading the stocks. As the statement still goes on the official site main page:

“We believe that the financial system should work for the rest of us, not just the wealthy [...] We’ve cut the fat that makes other brokerages costly, like manual account management and hundreds of storefront locations, so we can offer zero commission trading.”

That came as a revelation for the users that didn’t want to be charged from $1 to $10 a trade just to pay for overhead. Although, the simplicity came with some limits to functionality: Users could not short sell or trade mutual funds, options or fixed income instruments. As Investopedia notes, “research was limited to very basic pricing graphs and dates for corporate events, with the assumption that millennials, their target customer group, would find any data they need to make buying decisions on other websites.”

The iOS and Android apps were launched in 2015, now Robinhood allows trading from the desktop as well. Back in the early days, Techcrunch wrote about Robinhood’s integration ambitions, mentioning its collaboration with Stocktwits, Openfolio and Quantopian. As for now, the app doesn’t have a publicly available API but, according to the official site, is working to provide this in the near future.

Robinhood business model involves earning interest on uninvested cash in customer accounts. Experts highlight that the app also pass through any regulatory fees that are incurred when a trade is placed: “These are typically fractions of a penny, but the firm rounds those fees up to the nearest penny.”

But the main source of income for Robinhood is margin trading — i.e., lending a money with an interest rate to the owners of Robinhood Gold accounts. The account minimum for Robinhood Gold, the broker’s “premium margin account,” is $2,000, which is a regulatory requirement that all brokers must follow. The user pays a fee every month for access to a set amount of margin loans, whether he/she uses the money or not, starting at $6/month for an additional $1,000. The monthly price rises with the account size and borrowing potential, going up to $200 per month for $50,000+ account sizes.

The company quest into crypto

In February 2018, Robinhood launched its no-commission cryptocurrency trading division with a signature, Tron-themed design. Originally, it had supported only Bitcoin (BTC) and Ethereum (ETH), with trading available for U.S. residents in California, Massachusetts, Missouri, Montana and New Hampshire. In July, the app has added support for Litecoin (LTC) and Bitcoin Cash (BCH) and then later, for Ethereum Classic (ETC) and Dogecoin (DOGE). Robinhood Crypto is currently available in 19 states of the U.S.

In the first four days of the Robinhood Crypto announcement, it had one million users signed-up. The company’s co-CEO, Vlad Tenev, told Fortune that the crypto division is not as much a source of profit as it is an important buildup to the company ecosystem:

“We don’t intend to make very much money on it at all for the foreseeable future [...] We intend to operate it as a breakeven business [...] The thinking behind that is what we’re really doing is building an ecosystem. Right now the products are investing products, so crypto slots in very nicely alongside the 10,000 plus other instruments that people can trade.”

While Robinhood allows traders to buy and sell crypto on the platform, users cannot transfer assets purchased on the platform to a third-party wallet. In June, rumors arose that Robinhood was going to launch a cryptocurrency wallet following a job advertisement for multiskilled cryptocurrency engineers posted by the startup. In the same month, “people familiar with the matter” told Bloomberg that Robinhood plans to obtain a banking license, with “constructive” talks with the U.S. Office of the Comptroller of the Currency to position itself as a banking services provider. 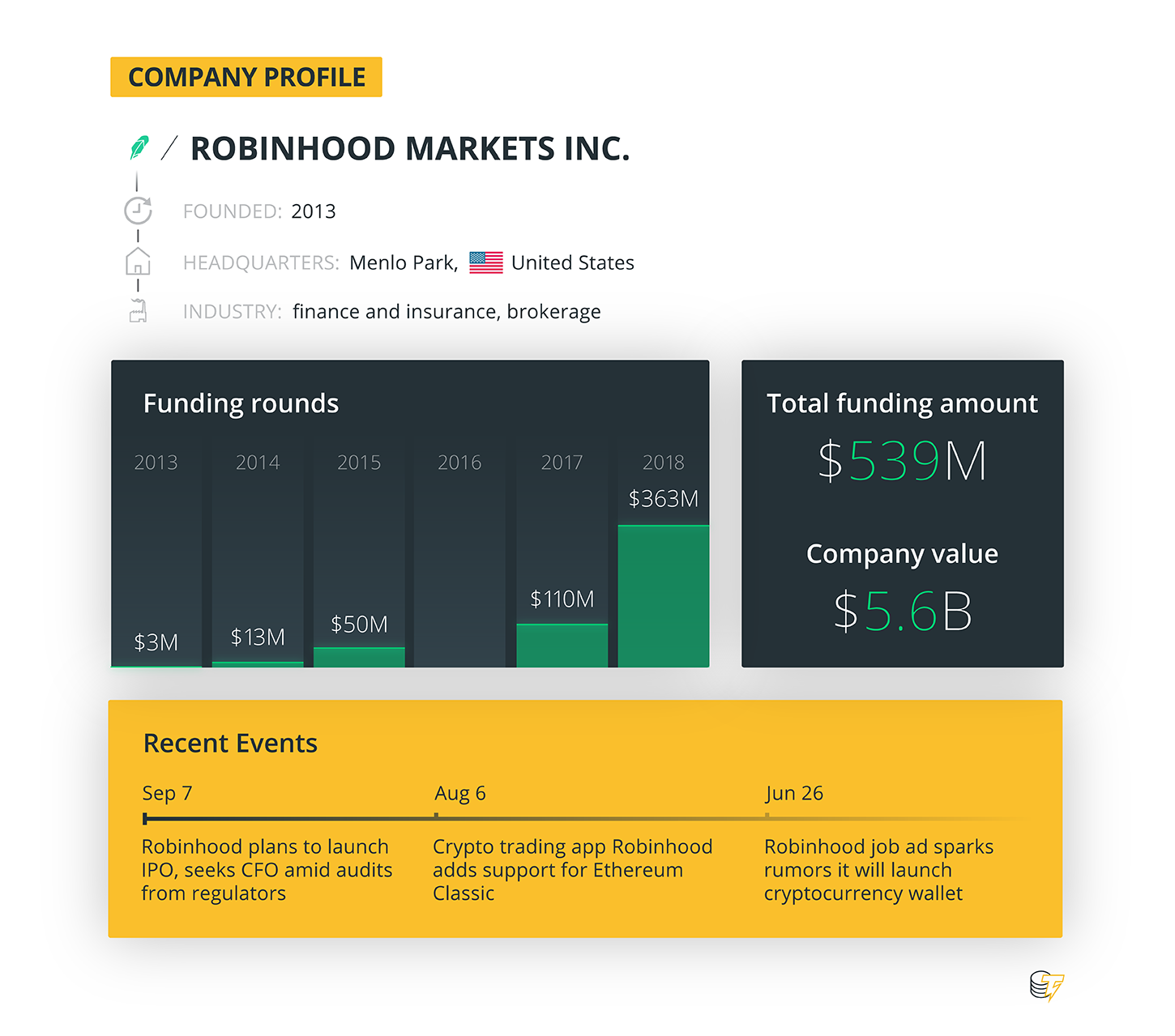 The job description fueled the attention to the product even more:

"What has been created so far only scratches the surface of how Robinhood envisions cryptocurrencies to play a role in our users’ lives."

That caused a wave of interest in the crypto community, as users and media outlets shared their opinions about the hypothetical threat to the dominating crypto digital wallets, such as a market leader like Coinbase, which charges customers a two percent transaction fee or more for buying and selling cryptocurrency. Earlier, Robinhood co-founder and co-CEO Baiju Bhatt also expressed some serious ambitions:

“We expect by the end of the year to be either the largest or one of the largest crypto platforms out there [...] We also really feel we'll have the absolute best experience for investing in crypto as well.”

“Robinhood's produce cadence has been very impressive [...] [Sequoia Capital] invested because we think that Robinhood has the potential to bring its low-cost and user-first approach to revolutionize large portions of financial services.”

Robinhood isn’t immune to criticism. Aside from the alarmist Time note, focusing on the dangers of a simple design and careless enthusiasm of non-professional investors, the trading platform has been exposed for some flows, precisely as a stock market instrument. The most important is the lack of benefits for the large investors, as if the tool was only meant to satisfact the under-$1,000 accounts.

Investopedia notes that “Robinhood’s order execution engine does not seek out price improvement opportunities, which is something investors who trade large lots of 500 shares or more look for in a broker.” In some cases, the free transaction nature of Robinhood wouldn’t compensate the large investor for the absence of price improvement tools, which would made the app less attractive than its more conservative competitors.

Moreover, Fortune magazine warns that “like many tech startups planning to go public these days.” Robinhood is still losing money:

“The thing is, investors in IPOs are willing to tolerate losses as long as they will be turned soon enough into growing profits. And they’ve learned to distrust CEOs who talk cavalierly about losing money. Witness the downfall of Groupon after its manic growth failed to deliver profits, or Uber, which has had to retool its expensive global ambitions.”

“At some point, those venture capitalists are going to want some return on their investment, and zero commission trading removes a major source of revenue. But free trades are the key feature Robinhood offers. They will have to generate revenue somehow.”

As for the digital currencies, the Robinhood Crypto app didn’t spark any substantial controversy, is still enjoying a good reputation and produces optimism in small investors who are tired of the transaction fees imposed by the established players. The level of attention to the company’s hiring announcements this summer showed that the market definitely welcomes new competitors and is interested in any chance of establishing closer ties with the traditional investment universe.