Self-healing blockchains are the only way to create a truly decentralized world within the decade.

The world is eagerly waiting for a next-generation, high-performance, permissionless blockchain, and this blockchain should be able to industrially scale all decentralized applications. So far, the crypto community has witnessed:

Sharding mechanisms give hope for unlimited, sustainable scalability of blockchains, but many people in the blockchain space strongly believe that the scalability or sharding has reached a tipping point — but that is not quite true. Let’s dive into it.

In the blockchain world, why do we need sharding?

This work needs to be harmoniously split among all the peers in a P2P network. This splitting of work is called sharding technology. Sharding can be applied to transactions, computations and storage.

A permissionless P2P network is unpredictable, and to compensate for this unpredictability, various blockchain protocols fix the number of validations and the number of storage copies to a constant that is derived from a mathematical computation based on certain assumptions. This limits the scalability of blockchains, as the system will either overcompensate and limit scale or undercompensate and risk security/integrity.

Problems faced by peers/shards in a P2P network include:

The culprit here is the unpredictability of P2P networks! This decreases the performance of validation, computation and storage.

Due to the uncertainty in P2P networks, a self-healing mechanism is introduced.

Case two: Ideal P2P. Consider an ideal P2P blockchain network where all the peers in the network are available 24/7 with good internet, bandwidth, electricity supply, etc., and are good peers that are not malicious. Then any transaction/computation/storage that arrives at the network can be validated/computed/stored by one peer. (1)

Case four: Self-healing blockchains. Cases one, two and three are extreme scenarios, as shown in the graph below. The number of transactions/computation/storage should depend on the level of deviation from the ideal state (with an adequate safety margin). (N/x(c)), where (c) stands for the chaoticity of the network. Chaoticity (c) of the network is a function of internet bandwidth, electricity, data availability, data consistency and the number of nodes joining or leaving. If there is any change in the function compared with the ideal state, whether positive or negative, countermeasures are deployed accordingly by the P2P network. Hence, the network automatically heals if there is any stress on it. 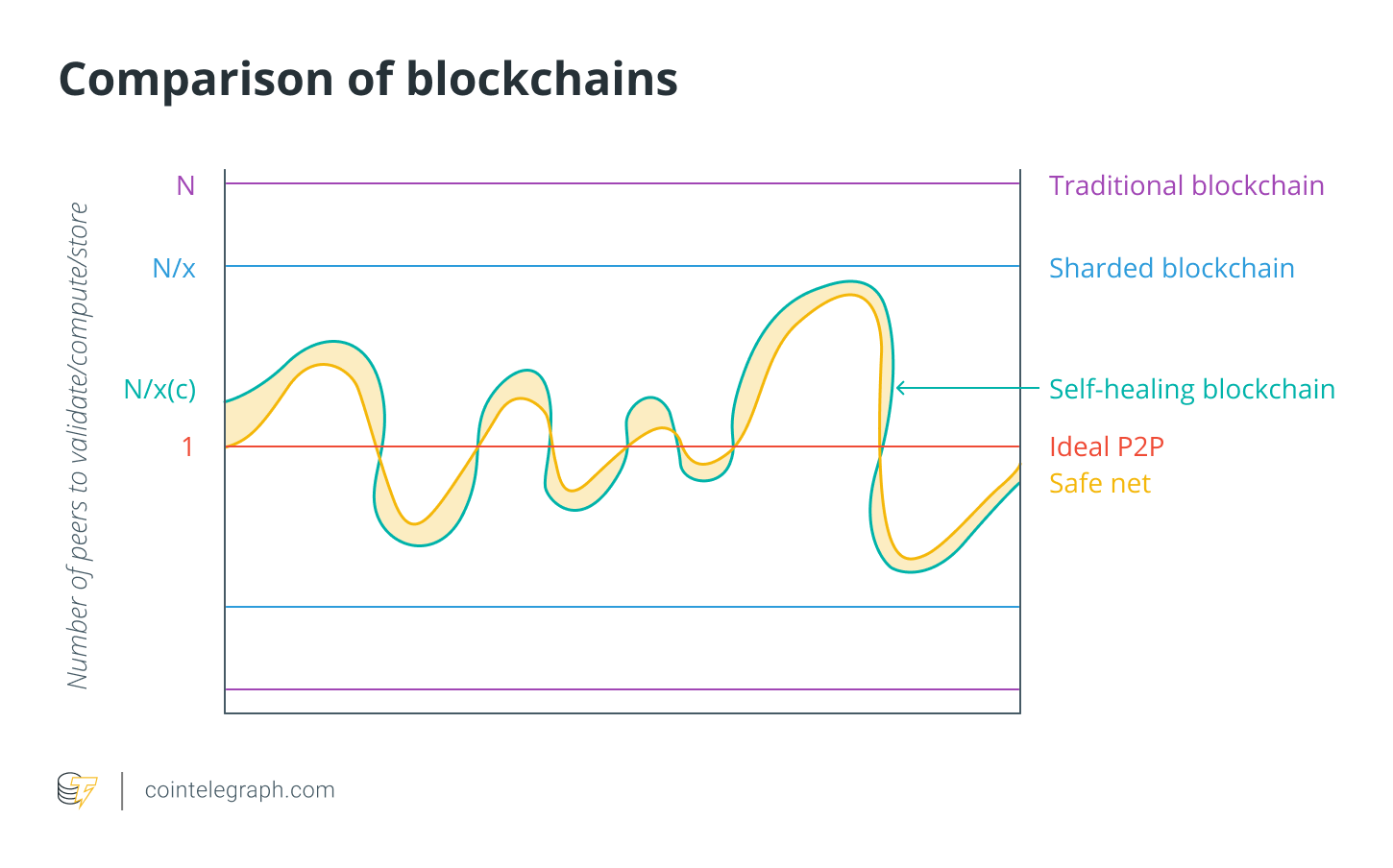 The analogy to self-healing blockchains

Let us use the Paris subway as an example, where depending on the traffic of people, the metro trains change their timing, frequency, number of compartments and speed.

Akshay Kumar Kandhi is the head of innovation, research and development at Uniris, where he is at the forefront of research in blockchain and biometrics. He has a degree from Ecole Polytechnique in France.

Nilesh Patankar is the co-founder and chief operating officer of Uniris. Nilesh is a seasoned technologist with over 25 years of experience in the payments domain. He has managed global programs for the card network Mastercard and the bank Barclays. He was also the chief technology officer of Payback, the largest coalition loyalty program in India with over 100 million users.

Sebastien Dupont is the co-founder and CEO of Uniris. Sebastien is a security and identity expert. He was responsible for two of the largest projects at telecommunications company Orange: Identity, which had 100 million users, and Mobile Banking in Africa, growing the turnover from 10 million euros to 4 billion euros. He was also a cybersecurity expert at Thales. He has been a prominent blockchain evangelist since 2013.

Samiran Ghosh is the senior global ambassador of Uniris. He is also a member of the prestigious Forbes Technology Council, MIT Technology Review and is a TEDx speaker on technology.