The First and Most Reputable BTC Escrow Is For Sale

BTCrow.com, the oldest and most reputable bitcoin escrow service in the market, is for sale. 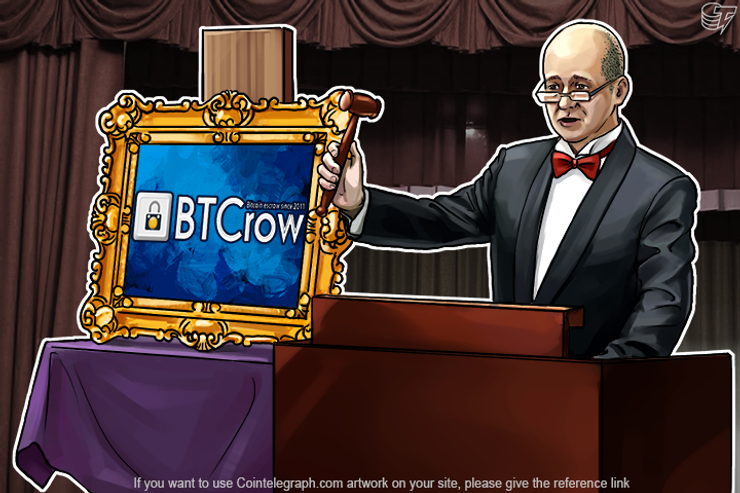 BTCrow.com, the oldest and most reputable bitcoin escrow service in the market, is for sale. Potential buyers can make an offer in an auction which closes on the 2nd of January 2016.

Both buyers and sellers serviced by BTCrow had transacted more than 7.5 mil BTC in total during the four years of its existence, according to the website. The profit numbers reach more than 25 BTC monthly.

The site was launched in June 2011 with the aim of adding trust and reliability to online bitcoin transactions at minimal cost, while protecting both buyers and sellers via an independent dispute resolution service. Users pay a 1.5% escrow fee.

The original founder sold Btcrow in 2012 to two students, who according to the words of one of them ‘were trying luck in bitcoin’. He has been the sole owner since 2014.

“I have been forced to choose between my priorities and I can't dedicate this business more time. And it needs more and more time. On the other hand I think it's a good time to sell,“ he explains to Cointelegraph.com the reasons for selling a profitable venture.

“We have received many offers, many false but there are a few serious offers, a particular one of a known company. This site was a pioneer, began and facilitates the exchange of bitcoins for services and is part of bitcoin history. I hope the next owner will improve it, grow, and keep it running for many years.“

“The BTCrow.com sale is very interesting. While they choose to sell/auction it in a very unique way, it is also quite hard to prove their claims. For example they claim they earn more than 25 bitcoins a month, yet they say 'Total 7,519,238.91 BTC in transactions'," founder of competing service Escrow my Bits comments for Cointelegraph.com.

“I would say our services are quite different. BTCrow has more or less stayed the same for many years. Escrow my Bits is the first and currently only escrow company offering escrow that can be pegged to a fiat value. We also have many more first of a kind escrow features in the works that no one has ever done before. I would say BTCrow's biggest value comes from their name and reputation. They have been around for years and have ratings and trust from much further back than any other escrow company.“

Operator of another competitor SafePay BTC was surprised with BTCrow's offer for sale. “Escrow is a much needed service in the Bitcoin community, due to the number of scams, and lack of regulation like in traditional banking. But, the lack of government involvement is why we like Bitcoin. Escrow is a self-regulating measure protecting both consumer and seller.“

SafePay BTC is a very similar service today, though they have many things planned for next year. MultiSig is the most important and asked feature starting in January, in addition to site integration tools, similar to how PayPal works, so e-commerce sites and markets can utilize third party escrow in their checkout process. “We will also be starting a list of legit vendors, and a feedback and Q&A system, that can be integrated into stores, further protecting consumers and helping great vendors who deliver,“ says the operator to Cointelegraph.com

“It's sad to see BTCrow go, and to be truthful, we have also placed a bid and would love the opportunity to expand our customer base, while adding other value added services to the industry. It's too bad they have not provided an open way to communicate with them, because I would like to speak with someone about a serious offer that would be beneficial to the overall community as well as BTCrows' customers.“

Related News
Top Staking Projects of the Crypto World Today: Report
Startup Brings Crypto Payment Option to Over 730 Locations Worldwide
Two Veteran Traders See Bullish Signs With Bitcoin Rebounding to $8.5K
Effect of CME Futures Options on BTC Price Depends on Halving
SEC Goes Head-to-Head With Telegram, Makes a Guinea Pig of TON
‘Nothing Special’ — Bitcoin Slumps 6% on Coronavirus, Chinese New Year
<div is="sidebar" :sidebar-data="{"promoButtonsI18n":{"crypto-button":{"url":"crypto.btn.sidebar.url","label":"Get Crypto At True Cost\n","text":"Cryptoassets are complex instruments and investments carry a high risk of losing value. You should educate yourself in how crypto-markets work before making any investments. Always invest responsibly and be prepared for the risks associated with investing in or using cryptoassets. This promotion cannot be considered investment advice."},"etoro-button":{"url":"https:\/\/ad.doubleclick.net\/ddm\/clk\/437480595;240556498;x","label":"Try Etoro","text":"Trade on the world’s leading social trading platform (Highly volatile investment product. Your capital is at risk)"},"hitbtc-button":{"url":"https:\/\/h