The Race 'To the Moon': Blackcoin and NXT Compete For Crypto 2.0 Crown

NXT and Blackcoin are rushing us into the cryptocurrency 2.0 future faster than anyone expected. 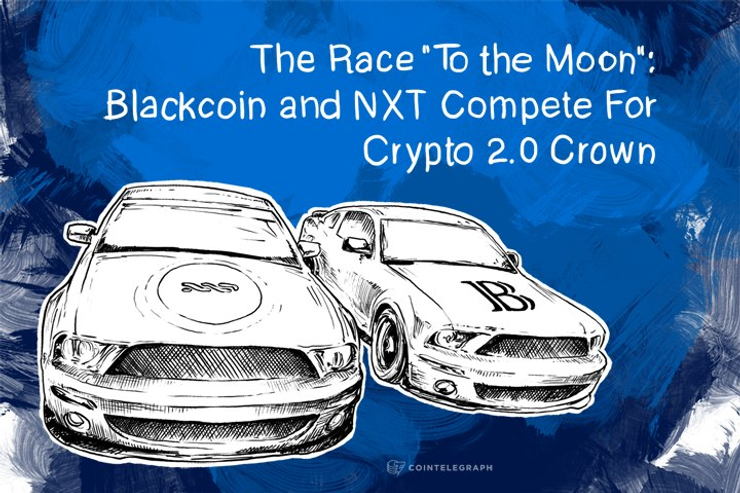 NXT and Blackcoin are rushing us into the cryptocurrency 2.0 future faster than anyone expected. But which one will get us there first?

In 1957 the Soviet Union launched the first manmade satellite named Sputnik and kicked off the space race between itself and the United States. The race ultimately culminated in the United States landing a man on the moon in 1969.

The phrase “to the moon” is one of the most popular and oldest phrases in the cryptocurrency community. It represents a nondescript and near mythical price of Bitcoin or another currency far above its current price, which it will presumably reach after mass adoption. “I'm holding my Bitcoins until they bring me to the moon” is the general use of the term, although it has evolved quickly over time, as sayings on the Internet are apt to do. The next big wave of features in cryptocurrency is commonly referred to as “Bitcoin 2.0” or “Cryptocurrency 2.0.” The general idea is that blockchain technologies can be used to transfer things other than cryptocurrencies. The first implementation of this was Namecoin, which also acts as a domain name registry that isn't controlled by a central authority.

Since then, the idea has evolved into entire new economic systems built on blockchain technologies, as well as more secure and more anonymous ways to transfer digital currencies. There are several systems in development and already in use that are built on the Bitcoin blockchain itself. Counterparty and Bitshares the most famous among them. However, there are two altcoins in particular that are using technology built from the ground up to be more effective than Bitcoin, and are racing neck and neck to get the most interesting Cryptocurrency 2.0 features implemented in their coins first.

NXT and Blackcoin have grown considerably since their launch. I went hands-on with both of the new feature sets, as well as a few still in development. While prominent members of the community and core developers walked me through the process, showing me what their respective coins can do.

Today, NXT has an asset exchange available in its stable release wallet, while Blackcoin has multi-signature wallets and smart contracts in an open (and fairly stable) beta. NXT, also has its decentralized digital goods exchange running on a test blockchain. While it isn't quite a “Cryptocurrency 2.0” feature, Blackcoin also has a new, more secure version of the Proof-of-Stake algorithm that deserves a mention.

NXT launched in November of 2013 and has grown as both a community and a coin since. There are some who will argue that NXT was distributed unfairly at its launch and they may even have a point, but their claims of NXT being a pump-and-dump scheme seems silly when put up against the features NXT and its core of developers are consistently putting out. If you want to argue that NXT is a get rich quick scam by its developers, you have to argue it's a get rich quick scheme that beat every other altcoin to major Crypto 2.0 features (see: Cointelegraph’s exclusive interview with NXT here).

At this point, the way NXT was distributed at launch matters very little. It has had the third largest market cap of all cryptocurrencies for a month and its asset exchange is one of the main reasons why. It matters very little if the original creators become billionaires because of it since the technology is useful for everyone else. The original coins had to go somewhere in a pure Proof-of-Stake algorithm, and it should be noted that the original Bitcoin distribution was similar.

The community issues with NXT remain a black mark for it, but it is quickly being overshadowed by the pure amount of major features in the pipeline and the ones released already for the currency.

Early drama caused the board to split into two and, more recently, a prominent member of the forum had his forum account hacked, showcasing the needs for NXT's own token, which could have prevented the scam had users waited for the token to confirm the dev's identity). The hacker then used social engineering to steal a not insignificant amount of Bitcoins from the community.

This was followed by a DAC developer leaving the community without shipping any of the promised products but keeping the NXT given to him. For what it is worth, the vast majority of the NXT community seems great and is very friendly. A few high profile bad apples have stood out in the bunch, but that doesn't reflect the coin itself.

And it may just be the flip side of having such a robust community. There are a lot of developers working on NXT actively, around fifty I'm told, and many of them are working on third party projects that are built up and around the core NXT technology, not unlike Bitcoin.

None of the issues with the community really matter. It is, after all, the math behind the product that matters. Math can't be faked and neither can the features.

NXT's asset exchange used to work directly in the wallet, and it still does, for the most part. However, they have prevented assets from being listed within the wallet. Since NXT assets are not name specific, the result was a few copycat assets trying to capitalize on the more well-known assets' names. So for now, the assets can be found at nxtblock.info which also has an integrated web wallet, but the assets users are interested in can be tracked, purchased and sold through the default NXT wallet simply by copying the asset ID number. Alternatively, users can use the third party Secureae, which can be funded directly with Bitcoin, removing the need to buy NXT on an exchange.

That wallet probably deserves a short side note. Out of all the locally stored crypto wallets I have played around with (which, admittedly, isn't all of them and only includes a few altcoin wallets) the NXT wallet is by far the prettiest and one of the most user friendly, considering its rich feature set. Everything is nice and clean and colorful. It looks like it could have been designed by a team at Microsoft rather than a crypto community (except the NXT wallet doesn't crash all the time and is by all accounts secure.)

By contrast, the user interface of the BlackHalo wallet, which is where users can access Blackcoin's new features, is nice and simple but nothing out of the ordinary in the crypto space. There is nothing wrong with that, it has great features, the NXT wallet is just extremely impressive.

There are also third party wallets including one put out by NXT exchange dgex, and the aforementioned Secureae wallet and nxtblock.info's webwallet.

As far as Cryptocurrency 2.0 goes, it should be noted that NXT got its features out before Blackcoin got theirs, but Blackcoin also approached it from a different angle, tackling smart contracts and locally stored multi-signature wallets first, before moving onto asset exchang