Former UFC fighter Ben Askren has changed the name on his Twitter account to promote the upcoming Bitcoin halving.

As Bitcoin (BTC) prepares to undergo a block reward halving next month, at least one prominent figure in the sports world is doing his part to promote the event.

Ben Askren, former Ultimate Fighting Championship (UFC) fighter and well-known Bitcoin bull, has changed the display name on his Twitter account to “Bitcoin Halving May 13”. Askren has more than 311,000 followers. 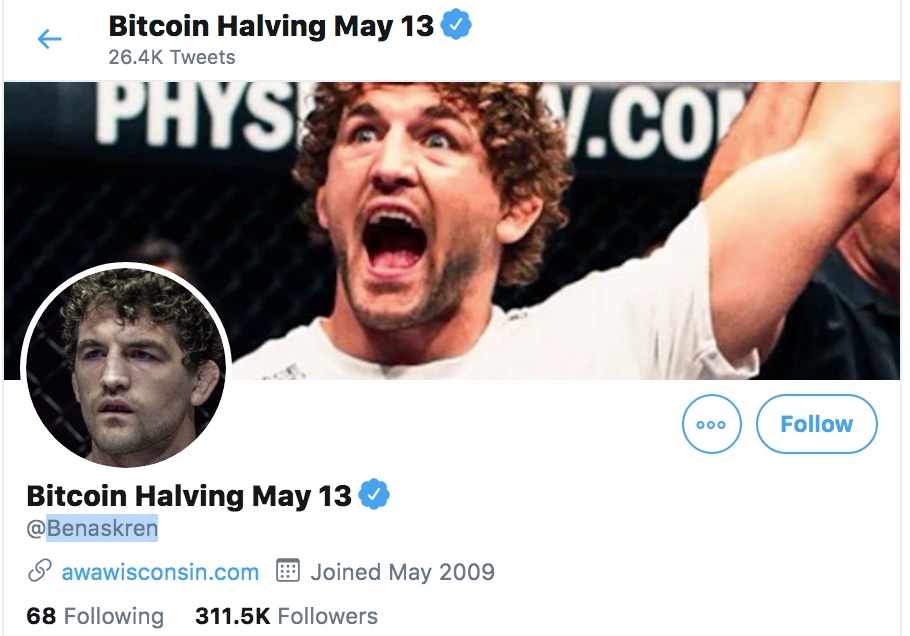 The name and date are referring to the official halving event happening in just over 36 days. When the total blocks in the BTC network reach 630,000, the ‘halving’ will reduce the block reward from 12.5 BTC to 6.25 BTC.

As Cointelegraph has reported, the mixed martial arts (MMA) fighter has an affinity for digital assets. Askren has promoted cryptocurrency on his Twitter account on more than one occasion, stating he “just bought more BTC.”

The former UFC fighter has also been paid to promote Litecoin (LTC). In January 2019, Askren revealed he had been sponsored by the Litecoin Foundation for UFC 235. He subsequently posted pictures on his Instagram account wearing a Litecoin-branded T-shirt.

An estimated five million people tune in to watch UFC events and the league recently partnered with Dapper Labs, the company behind the CryptoKitties blockchain game, to launch digital UFC-branded collectibles. The relationship between UFC and crypto stretches back to when Jon Fitch became the first MMA fighter to be paid in BTC back in 2015.

However, like so many other companies facing travel restrictions and being advised not to gather in large groups, the UFC has shut down many events in light of the COVID-19 pandemic.